We are excited to be headed out to De Anza Naturist Resort again. 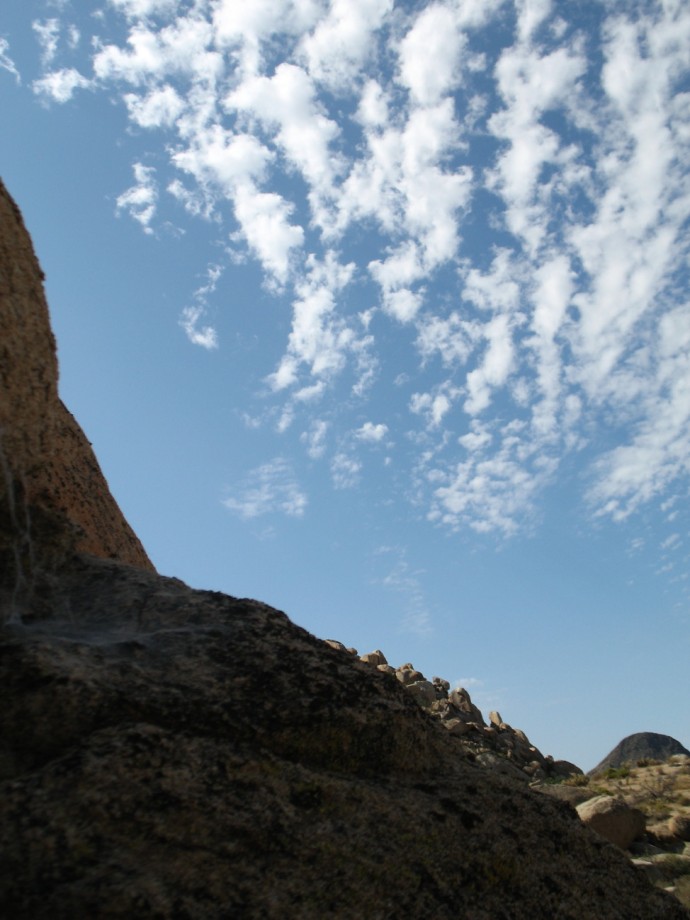 There will be a day trip to Black’s Beach. We leave in the morning after a rain has passed. A double rainbow is starting our day. How could anything go wrong?

Carnuding the interstate, we take a break at the first rest-stop on I-8. There are others around during the day. I had been there at night years before and had spent my driving break with a girlfriend, wandering around nude. At that time, there were no other cars and only the sound of a lone trucker parked with no lights. The interstate was very quiet. It was fun to be our natural selves in what is usually a very public place. I took a towel into the restroom, just in case someone pulled up while we were busy inside. My girlfriend liked the excitement of being extra naked. She simply left me outside the door as her sentry. Her only concern was the walk back to the car, if someone showed up. We sat on that towel for several minutes on the benches having a snack freely in the warm dry desert air under a starlit night.

This time, daytime, it is uncomfortable in the small Honda to put something on, just to use the facilities. I park at the end of the line of parking spaces, where the driver side door is facing away from everyone else. I’m to be obscured by the rest of the car. I climb out and am able to stand naked in the sun. I look at the other travelers moving about tending to their own business. I am nude in public without any hassles. They only see me standing looking out over the top of the Honda with my shirt off.

I slip on a pair of shorts there to walk around.

We arrive and settle into our little motel room on the property, one like our first visit there.

Vegetarian there, means veggie burgers at the restaurant. This time, we had thought to bring a cooler and a camping cook stove, which we used on our small porch. 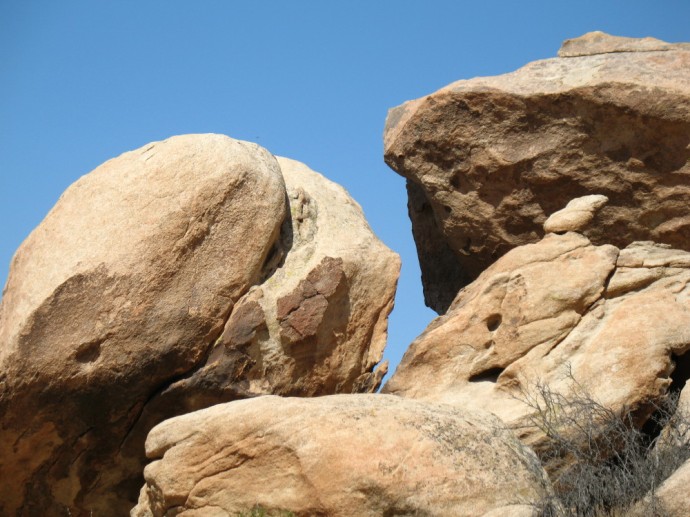 A dip in the pool and then jaccuzzi is refreshing, until we finally make it to bed.

At morning, we take ourselves to the coast at Black’s beach. There we place towels around our bodies to walk through the parking lot. We had been admonished by a local before, when using the long steep trail nude. He told us that the locals don’t want any trouble and asked us in a resentful tone to please cover up and be nude only on the beach. This rubbed against my free range grain, but we still complied with the local wishes. He was one of us, and we should respect the territory and the strategy to keep the beach nude. Towels are accepted covering up in the parking lot and glider port at the top of the cliff. In the nineties, I had a pretty friend wrapped only in a towel approach the airport and she received much attention and a tour with an explanation of hand-gliding.

Towels become furniture, not covering, as soon as we are among brethren on the nude beach and that is the way that it stays. There is some organization at Black’s Beach. A friendly fellow greets us and sets us up with an umbrella. They have some barbequed sausage that is being given away with a smile, but alas, we are both vegetarian and had to refuse the juicy temptation of the aroma.

There is excitement as we observe the locals confronting a voyeur who has tried to secretly take cell phone pictures of the nudes. A group nude men gather around him and the pictures are erased by the embarrassed intruder.

We find it wonderful to walk nude the length of the beach. It’s like a mile or two, I guess.

We jump waves for a while, until the undertow starts to pull too much on us.

It is fun to watch the glider folks fly high above us, while laying on my back and seeing the rich blue sky.

They float off of the cliffs above.  The sand is soft and we bake in the sun. One glider ends down on our beach by mistake.

He has the long steep hill to climb. There is always the breeze from the ocean delighting us with the fresh ocean’s salty water scent. We sun until we have to concede to the end of the day and leave. The coastal sun is getting us rosy anyway.

We had already begun to wear shirts to limit our sun exposure.

When we are done, we go from Black’s Beach into San Diego to the textile beach. This nude desert rat doesn’t get to a textile beach, but in the space time measured in years. I was curious as to what people were wearing. We wanted some fresh sea food. Again, a desert Zoney thing. Yes, we are guilty of enjoying some fish, or eggs at times, when we are eating out. I have to get dressed in the parking lot, with the attendant’s blessing. It is not unusual for people to change clothing in their cars around beaches.

People wear a variety of outfits. Contrary to what one might think from Baywatch, or the internet, there are not a majority of bare thonged butts. While we sit, a young woman comes out of one of the rental units, which are near us. She has on a silly small bikini. Her walk is measured and strange. It is stiff and as if she is ready to run, but holding herself in check. As she passes, we noticed that she is wearing a G-string device. I think that she is doing a dare. She walks out to the distant water, turns stiffly and returns in the same manner. Coming from a naturist resort, and feeling quite confined in our light clothing, wishing that we could be nude, or even something like what she is wearing, her behavior seems just…insanity.

We’re sitting watching the sunset from our outdoor table, taking selfies and enjoying ourselves.

The sunset is beautiful with DF’s peaceful smile in front of it, during diner.

After a couple of hours in the bizarre world of the clothing obsessed, we pay to get our car back, and tip for allowing us to put clothes on in our car, for no good reason. We strip at the curb, just before slipping into traffic for the trip back to our refuge.

The next day is a hike day. 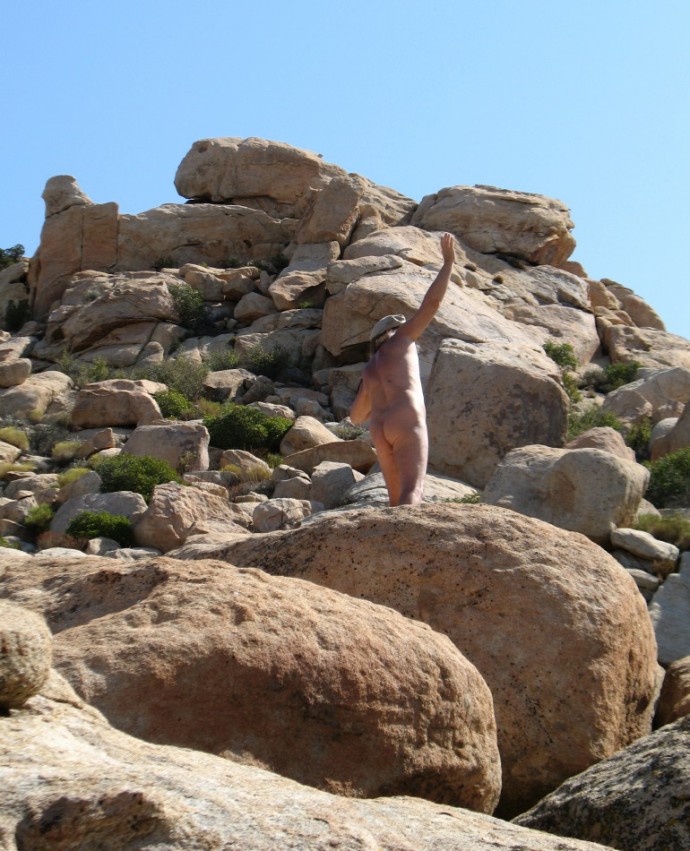 Dancing in the Sun to the Silent Music

September is still hot weather, so we get an early start. The bedrock is warm as we lay on it.

The odd shapes of the formations are everywhere.

We take our pleasure appreciating the flora and photographing what we find.

The peace brings us to a meditative state.

That evening, there is a themed party at the resort. A tropical theme has been chosen.  We have known of this beforehand and have prepared for the festivities and their lax festive attitudes. DF has brought out her grass skirt, with its leggy high cut, which is on the leg where the grass doesn’t hang. 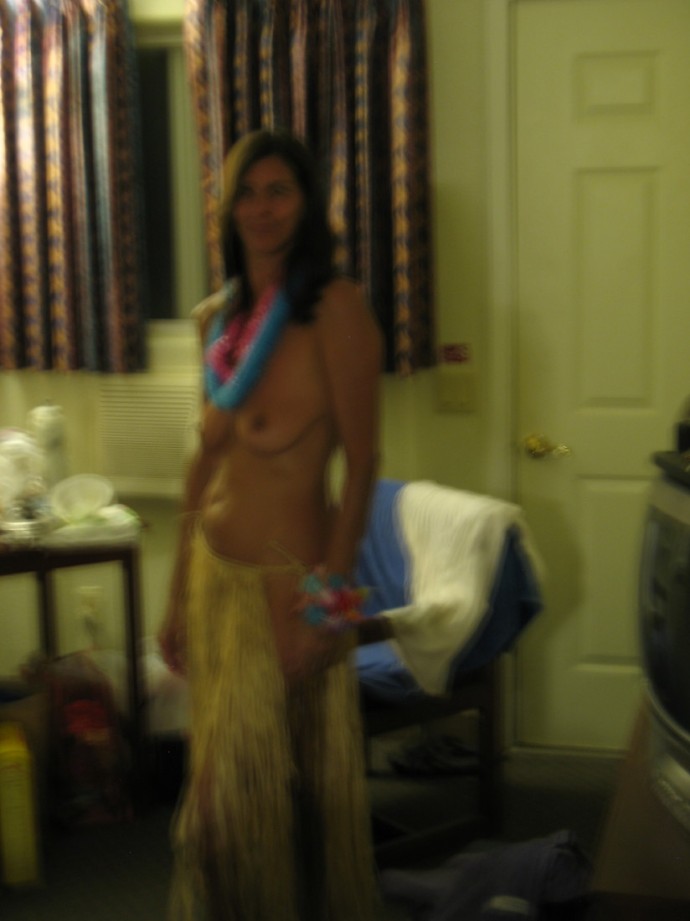 Bad lighting, this photo. Just the Jist of it.

I borrowed her coconuts for my breast.

Maybe with my fashion sense, I’m better off nude?

She didn’t need them at a naturist resort and looks more authentic and beautiful without. A top on a grass skirt is just wrong. 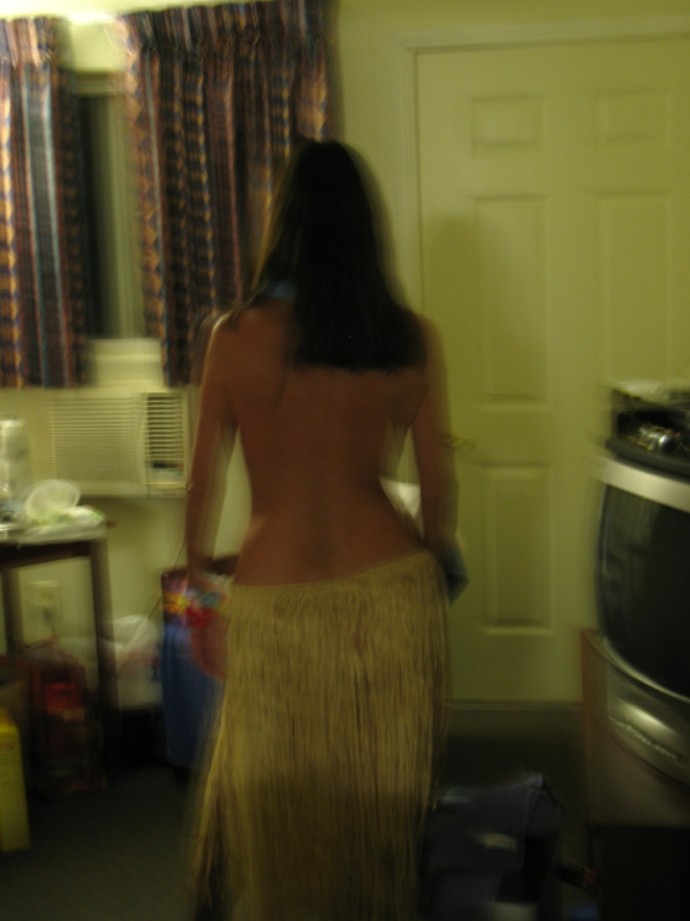 We have fun on the dance floor, but eventually settle down to the fact that we are here to feel liberated. Toward midnight, I untie DF’s grass skirt during a slow song. She has loved the sway of the skirt and the peeks that it gives. She gasps as she gathers a sense of being completely starkly naked, stripped in front of people on a dance floor, but who are all nude and naturist, too. Like this moment, every so often, we feel a glimpse of our textile conditioning. It passes quickly. I lay it away on the chair at our table, as she watches from her place on the dance floor. She adjusts quickly, embracing full liberation as a Rolling Stones rock song begins. Life is a process of unlearning.

I had entered in a sarong, which immediately became a sit down towel.

Eventually, the Hawaiian shirt is put to rest on the chair, which I rarely got to sit in. DF likes to make use of every song.

The coconuts, although fun and festive, became uncomfortable. I soon realized that I couldn’t slow dance with my girl wearing them. Totally barefoot naked with abandon is just the best way to boogey.

We take the long drive home. We don’t leave until the very last minute. We just want to stay at De Anza at liberty and leisure. The sun goes down about midway through our journey.