To escape the heat I went up to Mt. Lemon with my new girlfriend. I was pleased when I discovered her riding comfortably bottomless on the drive up the mountain. We had discussed this thing of nude living.  Although she confessed that she had only hiked topfree a couple of times, I discovered that she certainly has the spirit of naturism.

We searched far and wide to find some privacy for a picnic, finally finding a hillside with a slight indentation that we could use. The steep hillside coupled with the geometry of visual angles from being spotted from the road cloaked us just enough. It also created a patch of level on the steep slopes. We found that this day, there was a lot of traffic for an obscure barely maintained back road. We spread a blanket, enjoyed the view, and ate sandwiches and cherries. We stripped, enjoying the breeze and laid on our backs watching the rapid swirling of the wispy cloud formations (We sat at 8700 ft., during the monsoon season and it was extremely turbulent above us). I’d never seen clouds move so fast without fast-forward controls and a video screen

END_OF_DOCUMENT_TOKEN_TO_BE_REPLACED

My Private Place for Naturism #12

There has been more contact with these javelinas the last few days:

I couldn’t help myself. I snuck back out there to the large rock with a camera.

They are no longer beneath the big sunning rock, but in the hackberry bushes that they were under earlier. I have spotted one asleep. Two detect me and start moving around, grunting, sounding alarm. An ‘old boy, bolts alerted first, maybe to draw me away from the young. I see one very young babe follow another, apparently a mother, at a different, slower pace. I wait. Now, they are all alerted. I decided to mosey on. It just seemed right to give them a break. As I crept away, one of them gave a loud grunt as if to say, “F-you!” It is a challenge, perhaps a bluff, perhaps an intention, perhaps formality or male duty.

They can be aggressive, I’m told, but most likely not, or so I’ve found. Unless I corner one or separate/threaten the babes, I’m not too concerned. The Deeksha (a transpersonal energy) helps. Some moved, some got into ready stance, some just laid there, seemingly ignoring the intrusion.

The next day, I bask in the sun, just soaking in the entirety of it all.

In a bush, a loud grunt reminds me of the tone of a silverback great ape barking out. It sounds angry with something.

END_OF_DOCUMENT_TOKEN_TO_BE_REPLACED

We hadn’t been up to Mt. Lemon for a while. After a stretch of way too hot days, we drove up to escape to cooler weather. It is a wonderful scenic cruise, about an hour above Tucson, if you take your time. We took off up a dirt side road into the forest near the top. It is about 8000 to 9000 ft, give or take, depending which section of road, gully or bend you find yourself on.

There were campers and picnics going on at most of the sites as we searched, our nudity protected by the walls of our car. The full privacy for what we had planned was a difficult find.

I spotted a grove of young aspen, stopped, and discovered that it was posted as a foot traffic only restoration area.

END_OF_DOCUMENT_TOKEN_TO_BE_REPLACED

An Urban Setting with Wood

I’m rethinking this title. This is about going through daily tasks, living nude in an urban environment. DF and I, like most, don’t just live out on the road. We maintain a couple of homes, one urban and one more rural. This is about making the wood to fuel the fireplace and the stealth naturism involved in daily nude living.

I have always enjoyed cutting wood naked. I do it with good protective shoes, sometimes light sandals for splitting. Sometimes I’ll take a chainsaw to wood barefoot all over, if I’m in the mood. It is good exercise. My dad, who won a wood splitting contest at age 65, showed me proper form. I think of him fondly often, while I split a log.

Christmas Eve, I took an electric chainsaw to DF’s pile of mesquite debris. It was a colder day. I put a sweat shirt on to work outside. I found that it helped minimize scratches while hugging the piles, which had been left in the driveway and needed to be moved into the yard’s wood pile.

There is a neighbor very close, to the north and there is visibility down the drive to the street where there is frequently a great deal of foot traffic.

END_OF_DOCUMENT_TOKEN_TO_BE_REPLACED

My Private Place for Naturism #11: Among Them

Having just wrote the last post, I am inspired to take a walk out the trail. I think to bring my camera, but instead my stomach distracts me and I carry only a tasty smoothie in a plastic cup. The thought is that the walk might put focus into a mindful slurping on the fruity nectar.

I stop every so often from watching my step, to a pause in the trail, observing my surroundings. There is a more overcast sky today, the temperature is very comfortable, no heat from the sun. The whispy pink fairy dusters are scattered among the rocks. In the distance, the hills are lit up, coated in yellow with the flowering of paloverde and sage. The grey sky brings out a different tint to the vegetation. Grey is more grey. It appears in many shades. The grey-green plants stand out bright in contrast. 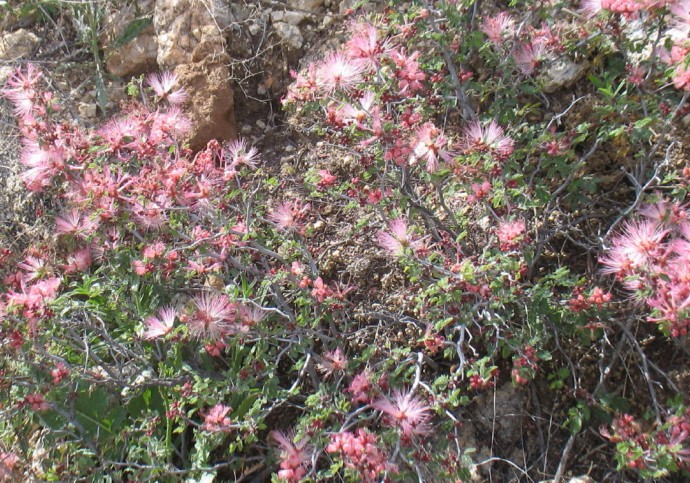 END_OF_DOCUMENT_TOKEN_TO_BE_REPLACED

Having made our way up the “unmaintained” road from Sheep Bridge on the Verde River, we pull onto FR 18. The road immediately becomes particularly crappy. It is mostly grey rocks in a grassy pinion pine forest. There is much ecological transition here. It is an odd mixture like pinion high grass land with stands of saguaros and other cactus mixed in. There are occasional fascinating patches of blooms. 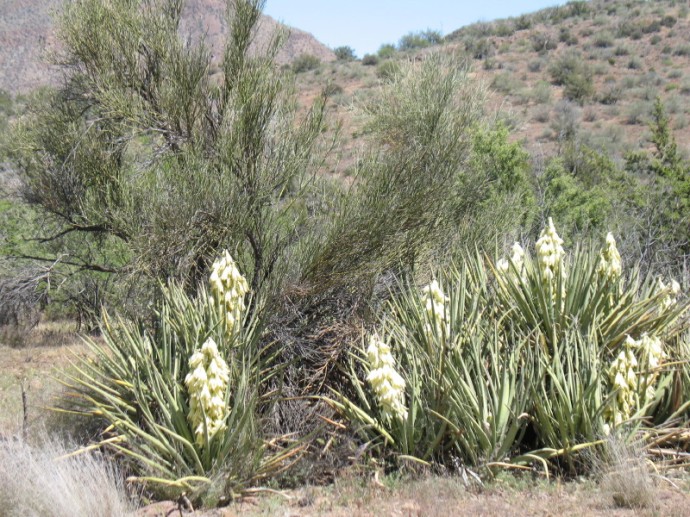 The psychedelic purple burst of the hedgehog cacti constantly catch our attention. 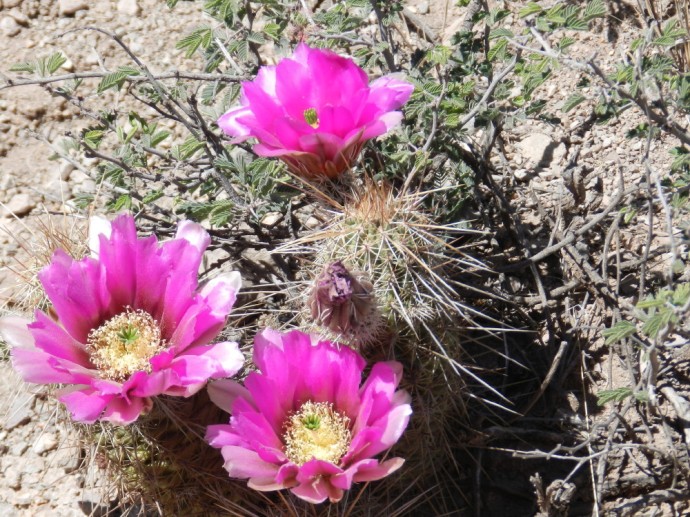 We are on our way to a riparian forest along a meandering creek. It is Monday and we should have the 4 mile trek to the Verde River and trail #11 to ourselves, both days. We are running late and may not make that goal, but how much disappointment can it be to be camped part of the way in the middle of what promises to be a paradise? 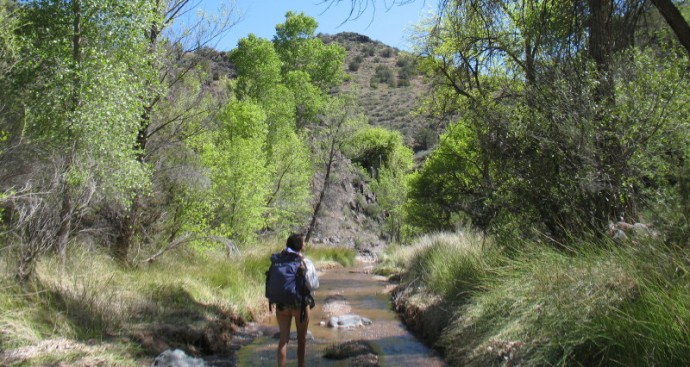