I woke up to the howl of a wolf! He is a redundant individual, repeating his call. The voice came from the south probably less than the southern border of the great field that I am glamping near. In the quiet calm of the forest, everything takes notice of the message.

Then, closer, another gets my attention. This one sounds more like a whimper, like a puppy in the forest. It can’t be very far for such a sound to carry. As I listen more intently for direction, this one is on the opposite side of my tent. I wonder just what message it is out to convey with this noise. Perhaps it is a pup calling to its mother.

I unzip a window to confirm. Then I quietly arise to unzip the front door of the tent. I had left the outside canvas cover down last night in case of rain and to trap some heat. I poke my head out to look in every direction. These wolves are so close, but the sounds that interrupted my sleep have stopped with the pull of a zipper.

I’ve been up just about 45 minutes. I climb out of the tent, noting the morning sun.  The warm light hasn’t reached the woods, but the golden dry grasses of the woodland’s prairie are aglow.

There is a chill and I’ll wait for heat. I’m still bundled and clammy from my night under a wool sleeping bag and the humidity of rain in the night.

I think to move the Luggable Lou (toilet bucket) closer to the campsite. DF has gone to Tucson and it is just me now. There is no need for privacy. 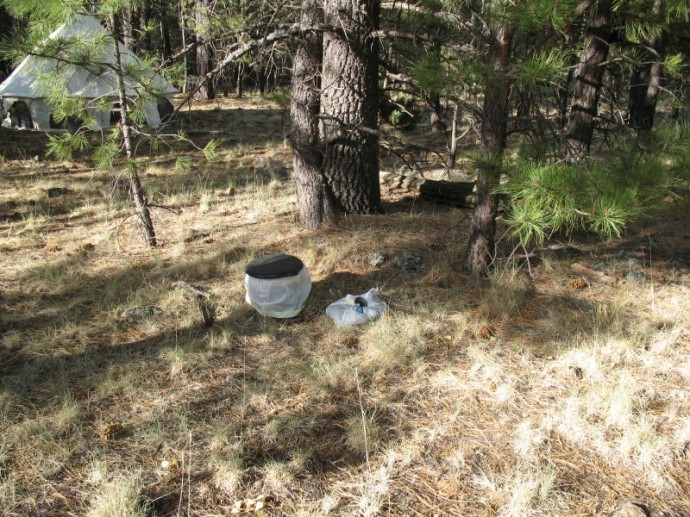 My concern is how animals, particularly canines, might react to the odorific discovery. I want no messes like a frolicking dog might make. Do you deal with wolves like a stray dog? Maybe when I get back to Tucson, I should watch “Dances with Wolves.”

The wind was blowing strong across the plain of the great field most of the evening. The sound of it through the tree tops was constant. There is a calm silence this morning. I think that I might wander to the huge field for some of the sun’s warmth, but for the predators visiting in the neighborhood, I’m feeling reluctant. “Think it out, Jbee. It’s okay” 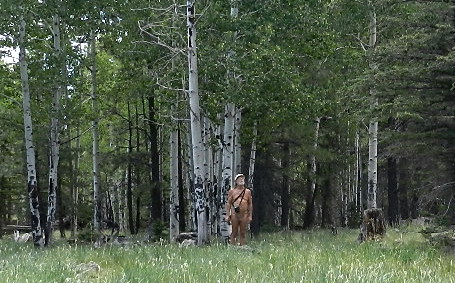 It began last night, as I settled into an article about ancient hiking trails in central Japan. There were three wolves acting out there in the evening. One seemed just down the hillside a count of yards at the intersection of a rocky forest road that I intend to explore in the coming days. Then, there were two more down that same trail to the south.

Each had a different call, like coyotes do, but more robust. These were at a distance to each other, not close like a pack. The wind, strong in the treetops, was all around. What has happened to my serene enclave? It no longer feels like refuge and a retreat fit for a monk, but a wild challenge.

They made their statements and the calls ended. I texted a social call to DF. There is a regional cell phone tower atop a local mountain. I get more bars here in the wilderness than my living room.

Later, as I read in the night, I hear them again. This time, they are all more south near that road that must be explored. The unknown can feel a bit creepy in the deep forest naked and alone.

I ponder what extra sensations I might feel during my next walk. The Mexican Grey wolves are supposed to be safe and nocturnal. They were reintroduced several years ago, to balance out the ecosystem. There have been no attack incidents in the adjustment. Even so, as I leave the tent, I scan with the beam of a flashlight, looking for any pair of glowing eyes amongst the dark thickness of the trees.

Still, I find myself quietly listening, supported by my flashlight held in an armpit, as I stand, making the day officially end in the grass before me.

Breathing in the clear mountain air, I feel more safely at home. There are plenty of glowing eyes above. The moon is gone, leaving only the brightness given by the Milky Way. Directly above, a magnificent luminescent bridge is connecting the towers of trees on each side of me. I’m okay here.

I remember the stroll that I took with DF after sunset the evening before. The light rain had settled much of the pine needle orange dust and obscured the tracks of the quads, ATV’s and our 4×4 out on the Forest Service’s, so called, road. On the new palette of the soil, fresh elk tracks had crossed our path. 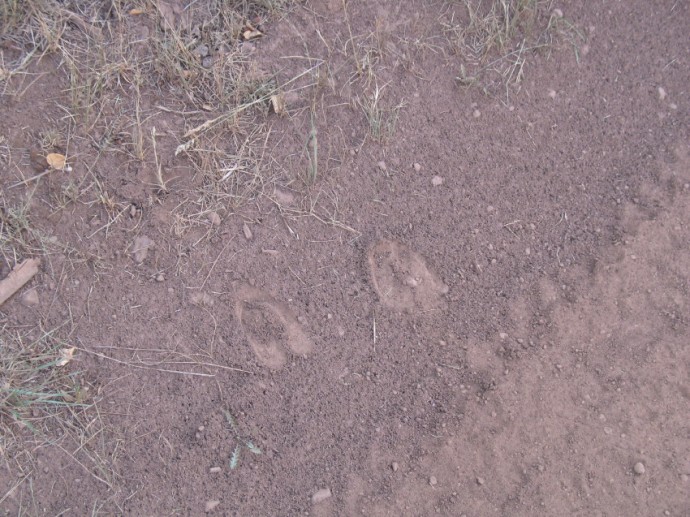 Looking down, I imagined with the clues left, that an elk had come from deep forest, crossed the road and traveled back into the thicker habitat.

Perhaps that is what the wolves are working on, a scent in the black night.

Having been nearly surrounded by wolves’ communications in the evening, I have been considering my relationship with nature. Most predators are smart enough to leave the dangerously odd human beings alone. Wolves have a reputation of hiding unseen to avoid contact. These, reintroduced, have been circulating in-between human activities.

We humans criticize the wild animals, but are they even as primitive in their response as ourselves? They seem to know that the human beast can suddenly turn on them, out of fear, or a misunderstood signal. They are unpredictable in their trepidation. A human can be deadly when in fear.

Thinking back, I have noticed many times and also read of similar experiences that nude humans elicit a different response. Deer, prey, tend to be less alarmed by the strange beast without its colorful furs. Nudes are different. They do not smell of the same strange smells, they don’t look the same, or move the same. They even sound different from the clothed, that is, when they don’t talk. For whatever reason, the naked ape puts many natural creatures off.

I have had little experience with predator reactions on that same nude basis. Might hungry wolves be less fearful, or more dangerous to naked humans? Might they shy away in a wolf’s version of, “Whad da heck!”

I once had a great mountain lion leap across the old jeep trail to escape this naked wanderer. That’s not much data for a poll, or statistic.

My thoughts go to the possibility of carrying a pistol when walking here, like a nude Indiana Jones, a leather pistol belt slung across one hip like a gun fighter. My thoughts watch how fear feels and how it makes people react.

It is Friday afternoon and a seeming war has erupted not far from here. It has become the weekend. Someone is spending hundreds of dollars on ammunitions to kill targets out by Carnero Lake. I considered leaving because of it. I no longer hear the wild howl of the wolves in the night. They seem to have concerns as legitimate as we humans. 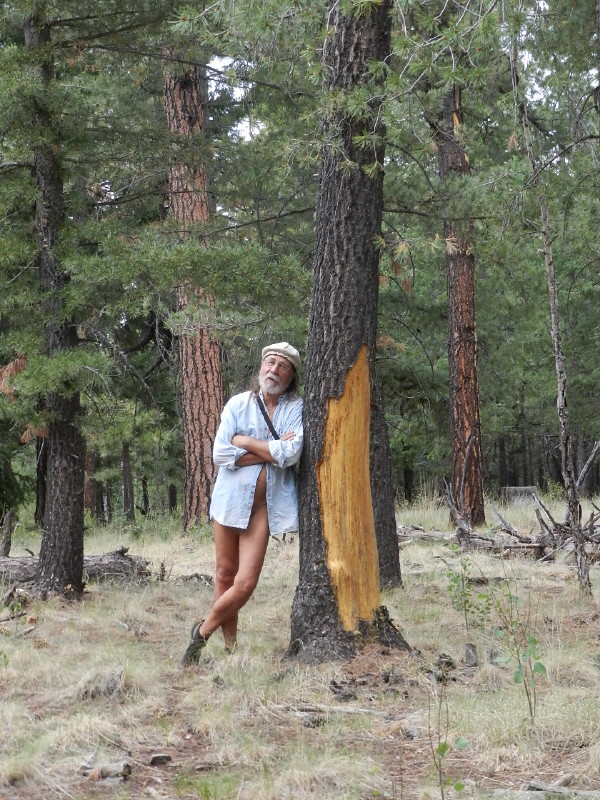 So, which IS the wilder and the more dangerous? Wolf attacks have been rarer than being hit by lightning over the centuries. They attack in defense, or eat the young and small. Our species makes them extinct, and why do we do that?

Be sure to click any image to enlarge it as you desire.

© The owners of TheFreeRangeNaturist.org as of the year 2015 declare. Unauthorized use and/or duplication of this material without express and written permission from this site’s author and/or owner is strictly prohibited. Excerpts and links may be used, provided that full and clear credit is given to TheFreeRangeNaturist.org with appropriate and specific direction to the original content.

One thought on “Dancing with Wolves”