We have mentioned our sweat before. It is a wonderful way to bond with friends and create nude community. We have described it to be as a spiritual exercise, but it is more. It is very healthy.

There is science to sauna and arts. Making something better and better is the science of sauna. Procedures evolve. When sitting around enthusiastic about something, it is difficult to not look for ways to improve the system. Questions come up and experiments are done. One decides where to sit, close to the heater, or higher where the air is more hot, or lower and stay in longer where it isn’t quite so extremely hot. Questions arrive like how much water to put on the stones for steam, when to scrape the toxins that come from the body, to sit, to lay down, to get up and move. These creative concerns can evolve into tools and design. 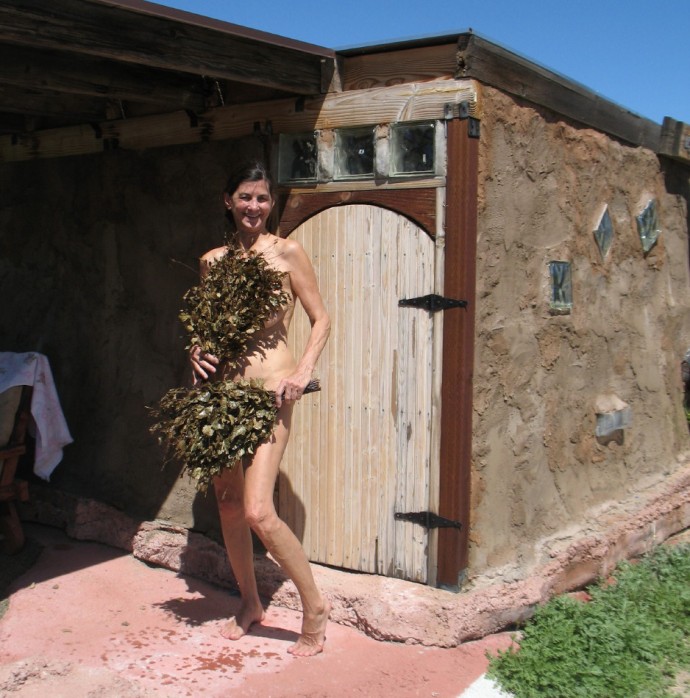 Last Sunday we hosted a sweat. Several friends came and shared. A younger couple arrived, then a much older friend. We got started sweating and sat conversing from, “How ya doin” to Amazonian Anacondas. After a while, another couple arrived and then a late thirties mom showed up with two of her cool kids, which are something like eight and ten. With DF and myself, there were ten of us participating.

Russian people have bathhouses ingrained into their culture. One of us grew up around Russian saunas. He loves to spend time in insane heat. One day, we managed to get the thermometer up to over 212F. When it passed the red bar, we had to take more frequent breaks. I was trying to understand why my body didn’t just boil over, like a kettle on a stove, or a boiled egg. He has described big city Russian public saunas with walls of heat, their customs and how they are used.This day he brought a couple of veniki. Three were in a five gallon bucket soaking when they arrived. These are bundles of birch branches with leaves. The stems would make good whips if singular, but they are a fist full at the base. The veniki as a whole is flexible and porous.

There is a picnic table in our sweat. When we sit on it, we are elevated toward the ceiling, where the greater heat is. We have a plastic covered foam mat on it for comfort. A towel of cloth is stretched out over that.

His girlfriend, eager to enjoy the process, stretched out on her stomach, serving as our model/guinea pig. He began to demonstrate on her. Later she rolled onto her back. The process stimulates the entire body.

Yes, the steam does fog up a lens instantly (DF)

The bundles are waved around two fisted. First they were shaken over the hot rocks, causing steam to rise, as the water rains down from them. The rising steam heats the veniki. This heats up the room even more, and creates a pleasant forest-like aroma with more intense humidity.

The swishing of the branches is done so that they gather the heat from above and coat the body with it. At intervals, the bundles come crashing down as a heavy swat. This sting opens the pores and then subsequently hot air is scooped down into them. It is a very effective way to awaken skin.

Sometimes the veniki branches are left sitting on the body, feeling like a hot wet blanket. It feels heavy and it swishes around. They are used to drag and scrape and stimulate the skin with heat, friction and moister.

Occasionally, the veniki is laying across the shoulders, or another section of body and a hand’s pressure is applied. This gives a massage effect and outgoing breathe cleanses the lungs. This pressure gives a heat pack effect to the hot wet blanket feel. There can be rhythm applied to the beatings, but every motion is a sensual surprise. 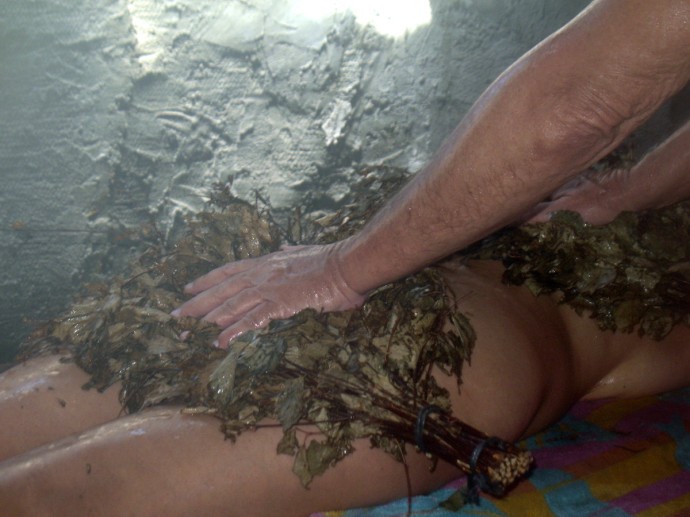 We soon picked up how to do the operation and began taking turns on the table, practicing on each other. I began to laugh at the sounds of the room, “Please, beat me harder” with pleasure filled moans and whipping sounds. Standing outside, one might wonder if what was going on inside was G rated.

Standing in 190F to 200F humid air and in movement, is amazing exercise. It feels good. Swishing the veniki works the upper body and lower back. A couple of us expressed that it would be a good healthy job to have. After working on others for a while, my wrists were giving out as the leverage in the brooms became heavier in time. Still, I could get used to this.

Being short on snow and frozen ponds here, we either just walk out under the stars to listen to quiet minds, or run a spray nozzle from a hose over the body during breaks.

Leaves get Stuck on Pink Bodies

We continued as the sun went down. I lit several candles in a candelabra for light. It was a wonderful experience shared by all.

After hours in the sweat, topped with this veniki massage and the exertion, I felt exhausted. I rolled off of the table, grabbing only what was necessary and dragged my body through the night and into the house.

This report on a Russian spa called the “Sweat Lodge” is very funny:

One thought on “Sweating Russian Style”