This year on World Naked Gardening Day (WNGD) we had no veggie garden. I’m selling my house and I figured that I’d be gone for the harvest.

There is a bumper crop of mustard, nearly waist high in DF’s yard. It had sprung up just as she was preparing to leave for Morocco with her women’s group. It all dried well under the Arizona sun while she was gone. The result was a mess. The thick stems have to be ripped up by the root by hand, or else they leave a yard full of daggers for bare feet. The task looked daunting. 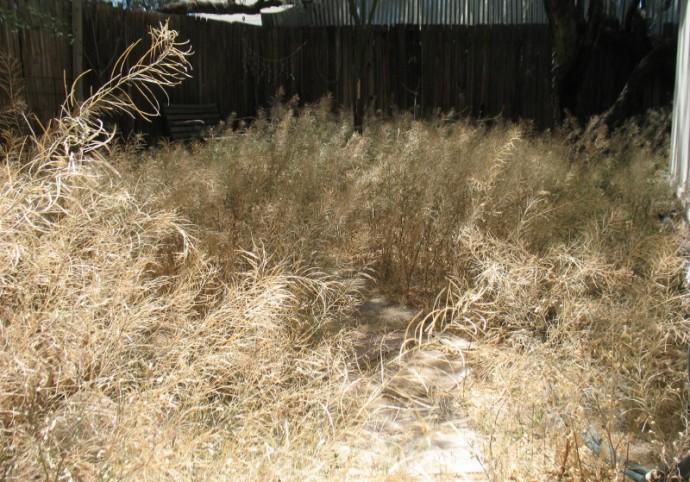 There had been frost damage to her potted plants earlier this year. These had to be replaced. So, we had gardening to do. Not the typical green veggies, but we could celebrate WNGD.

We had to delay our plant shopping while we waited for the airport guy to stop by with her “lost bag blues.” Somehow in Paris, the group had their luggage sent off to Minnesota in route.

In the afternoon, we drove over to Green Things Nursery. They have expanded the place and it is now huge. There are what appear to be fields of flowering plants on massive tables, all spread out on acres. The color’s display is wonderful. We just wandered for an hour and got acquainted with the bounty of diversity.

DF made her choices, we loaded up and went home. I parked the SUV to block the view from the street. That way we could replant the pots on the front porch in nude solitude.

While DF worked in the shade, I made use of the sun on a beautiful day, continuing to pull each mustard plant. I had gotten an earlier start, while we waited for the bag.

I found that my lower back and hernia exercises have come in handy. I used the squat position that those required. In third world countries, people still squat during activity and in rest, during their day. We in the west are stuck in chairs, and if we do squat, we have at least one of our feet bent up on toes. Neglecting this primitive positioning with feet flat on the ground, leaves us with lower back pains and hernia. Today, I got hours of exercise and practice to train my feet in the habit of staying flat when I squat. 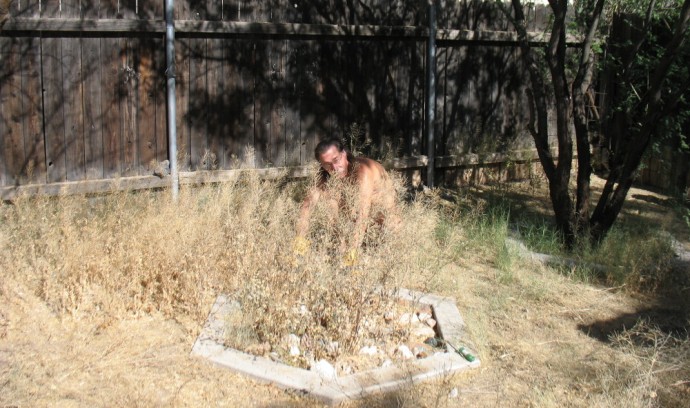 I remembered the women in India that would line up next to each other and squat, pulling weeds in the lawn, talking and laughing all day. When I had both feet placed flat on the ground, the leverage was increased and stress on my back was greatly lessened. As long as I pulled weeds in this position, I was fine and the roots came out better and with less effort. Gardening is good exercise, but up until this revelation, weeds had been a back breaker for me. It is actually very good for a body, if done properly. It is natural and a body needs this rather uncool looking activity. Getting up and down becomes a lifting project for the legs, also. I might of course add, that it is much easier to do without the constrictions of clothing.

I got about half of the yard denuded and accumulated a good pile of debris. I used the weed eater, reluctantly, mostly where grass was coming out of the cracks in the concrete. Barefoot all over is a risky proposition where small rocks can be whipped up to a rocket pace. 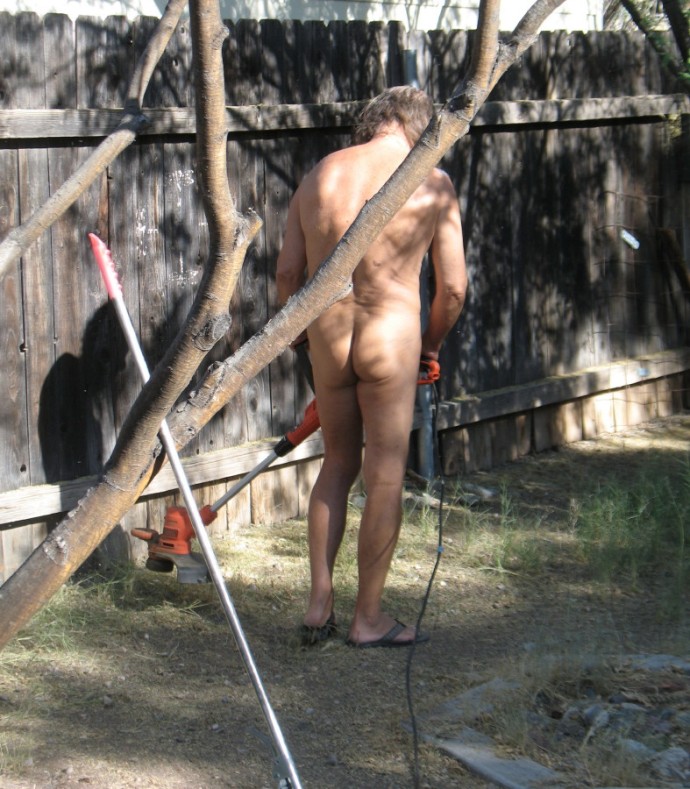 The day was good.

We ended with a sense of accomplishment, a workout, and had a delicious meal.

We talked about the urban nature. There was a very large (I think) cockatoo up in the branches of a tall tamarisk next door. These birds are not indigenous. This was someone’s escaped pet. I felt bad for someone, but good that it is surviving well, judging from its size.

There will be more to finish in this yard tomorrow.

I spent the next day pulling overgrown mustard, raking and burning the debris in a fire pot. 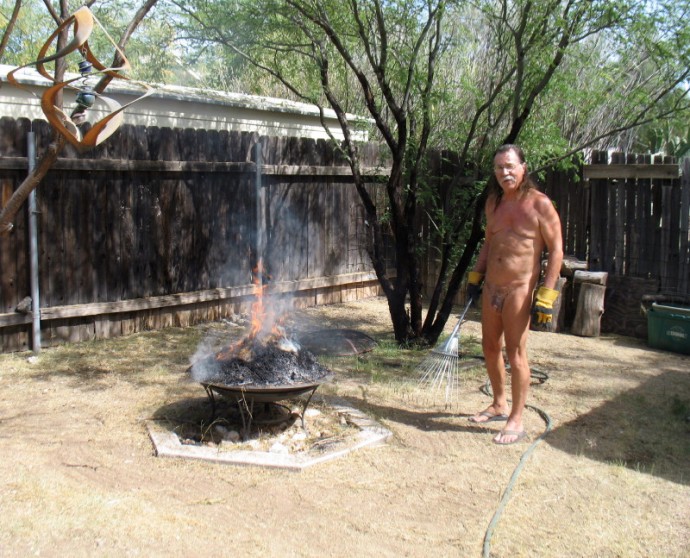 Rock walkways needed to be swept, raking and trimming was done. I got lots more sun.

At one point, as I took a break standing on the back porch, I noticed that the telephone wire birds were scattering around the neighborhood. Suddenly a hawk swooped down just over my car, across the fence and then near my head. Urban raptors like this now have adapted to Tucson.