During winter months, it can be difficult to get out on a warm day nude. Often the outing has to be quite short. These down times can be used to explore potential hikes. I will get on the internet, or dig into literature, or both. I can work with topo maps and Google satellite images. I can plan and dream about what I have to look forward to. I also use these times to explore, cozy and naked in front of the computer. Some places may be bare of leaves, but come spring there will be cover. Visiting, I’ll know where I’ll want to return, on a more pleasant day.

On this Christmas Day, after a child’s presents and in between other festivities, there is a tradition of hiking here in Sunny Arizona. We decided to go to it, as we were already very south of town near the Santa Rita Mountains. I had been out there recently with my son, while exploring, I was scouting for free range naturist potentials and trails. I wanted to show DF what I had found and get away for a few hours.

Remember: You can click on the pictures to enlarge and produce more clarity.

DF and I headed further south from our start, which was south of Tucson on back roads and trails. As there was a dirt road that I figured would continue across the desert, I stopped to set the four wheel drive for stability and decided to undress. The sun was out and bright, the temperature was in the 50F’s, and there was a wind, up to 15 miles per hour with some quick gusts. There was rain expected in the area. Inside the SUV however, it was like a greenhouse, summer-like.

The road didn’t go through, so we doubled back. There would be pavement and the small town of Sahuarita to deal with. The truck still in four wheel drive, lurched and tweaked when cornering on the asphalt , but dressing was more hassle, so I didn’t get out to readjust the lockers. Ten or fifteen minutes later, we were out on the dirt again, looking at wide open spaces. DF joined me, piece by piece her clothing dropped off. She was seeing the pleasure of no clothing on a chilled day. She eventually had to put her shirt by her head to protect it from the sun’s rays through the window, complaining that her ear was being burnt. 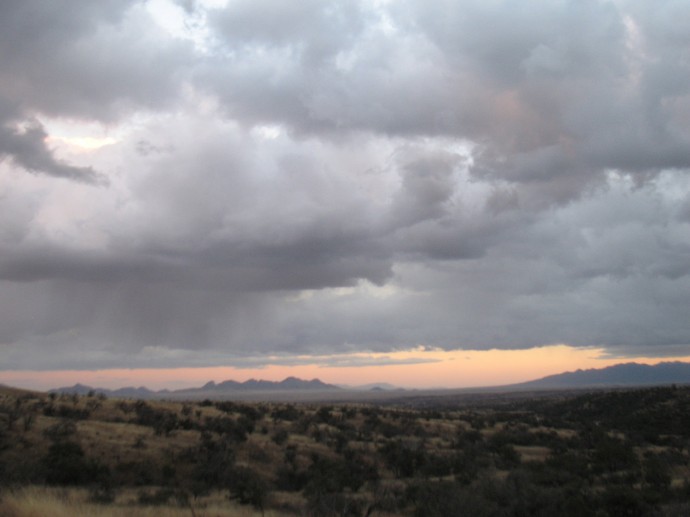 We continued near the small abandoned mining town of Helvetica. I showed her where I’d like to do some 4×4 and camping this summer. 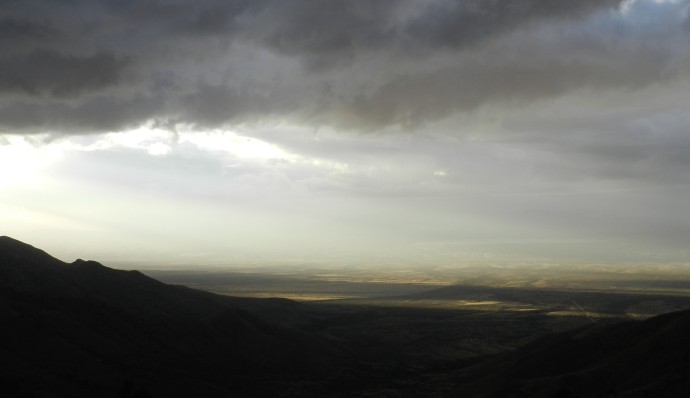 I pointed at the narrow trail of a road that climbs up the hills from the town. It crests next to a large granite mountain top. I’m told that there would be places to camp there.

It gives a 360 degree view, clear across the Tucson Valley with its expanse of sparkling lights, way out west past sacred Tumacacori, south clear down into Mexico and East…it is all spectacular. 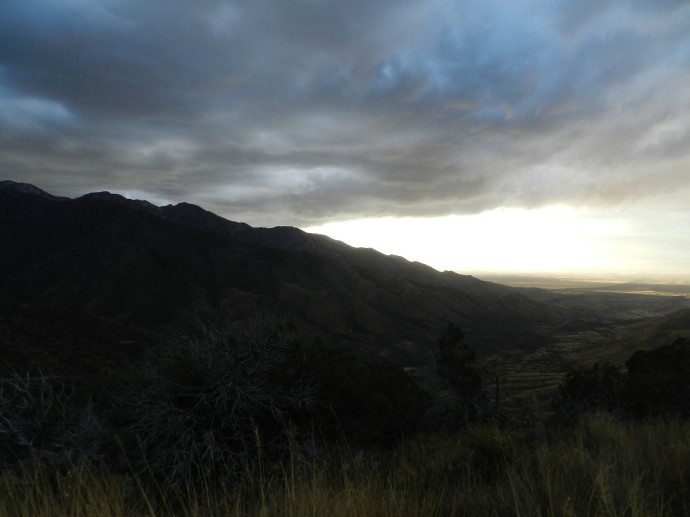 The spot is more than likely to be very private, due to the road. I’m figuring driving up for sunset, fire and stars (there’s a mountain top telescope near, a good spot) and sunrise in the morning.

It is high enough and vast enough to get a sense of the curvature of the Earth.

I wanted to show DF Box Canyon and the trailheads that we had found previously. Here are a few picks from that drive.

As Seen on the Trip Ten Days Before

It is a scenic drive up through the canyon, the road climbs through and then above the wooded area below.

I was hoping to find a spot with trees, scrub oak, and pinion pine. 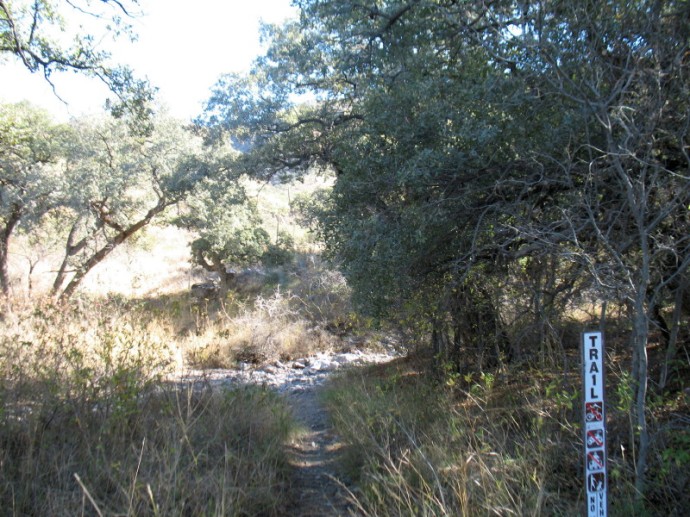 These would provide a wind break, but offer no shade. 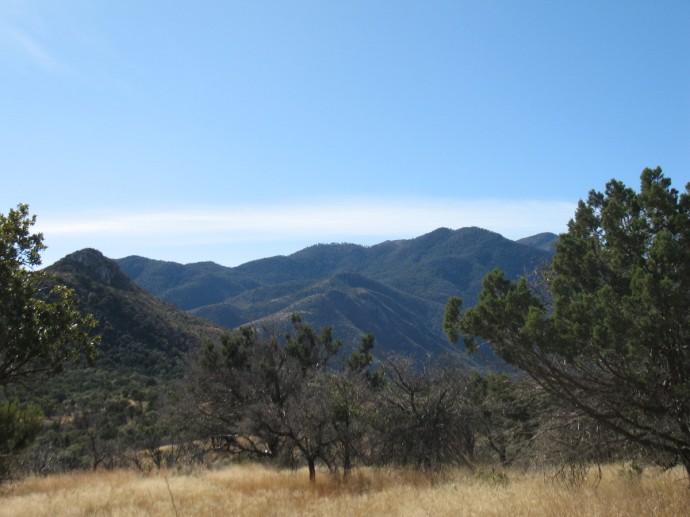 It found us. I parked the truck for more windbreak. The tall grasses were beginning to be whipped around by the air. 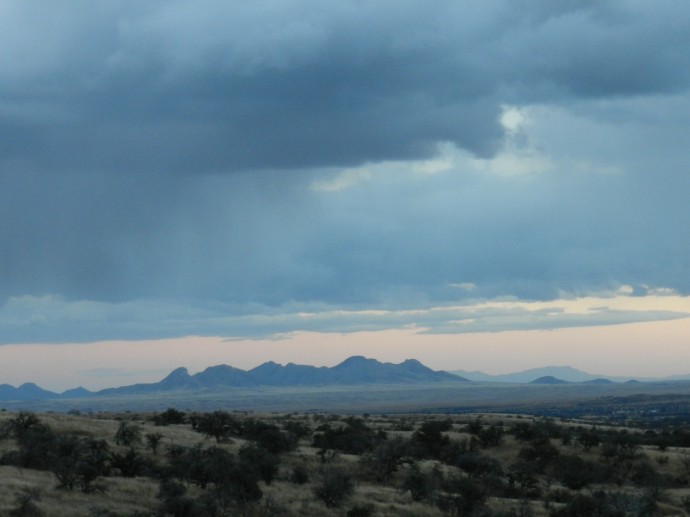 DF decided to spread out a picnic. She donned a couple of layers of warmth on top. I decided to explore over the rise to see if there was a short hike for later. I had to carefully and slowly negotiate through a hole in a barbed wire fence with danger on all sides, in nothing but VFF and a hat. At the top of the hill there was seen a nice meandering sandy wash surrounded by trees and tall grass below. 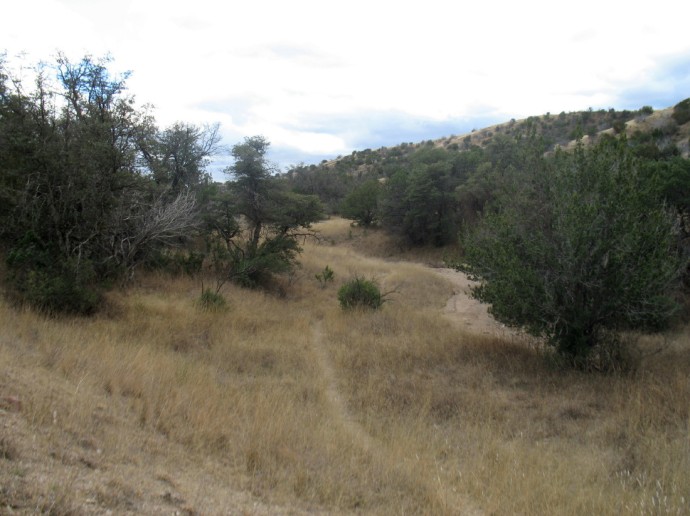 It was a bit chilly, so I took off running to stay warm down the trail and up the wash. There were pockets of still air here and there. It looks as though it wanders back a ways. I’ll be checking it on google and topo later as a nude day hike. In the meantime, I was hungry and had abandoned DF. I had gone further than intended.

I saw darker storm clouds to the north as I returned. 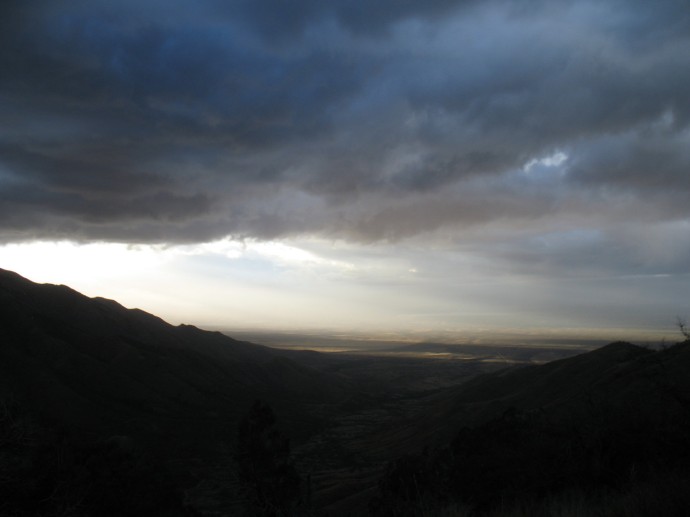 The wind seemed to be picking up. She had a great lunch on the tailgate. We sat in folding chairs and ate. I got up, put on a couple of top layers and wandered, staying warm. It was a pleasant place. DF stared and laughed at me in my thick warm attire, yet still bottomless…bottom-free.

The sun went behind clouds and the chill was truly in. We decided to take a walk up the trail, but nude would now be uncomfortable, so we in fact bundled up. It was quiet and private back in there. There were a few colorful rocks in the wash to observe and collect. We want to return. I wanted her to see the vistas at the pass and the trailheads, so considering the weather and the time, we returned and drove on, heater blasting.

Part of the Arizona Trail

We drove the through lots of beautiful country seeing few others, I think five or six all afternoon, once we had arrived on the dirt.

The pass was very windy and cold. The coming storm was now arriving. We looked out into the valleys at the sunbeams passing through clouds and under threatening rolling gray masses. The frigid winds pierced through our clothing. At one trailhead, we climbed up its poor slippery sand and walked down its side sloping curve around the first mountain, until rain began. Stepping back into the truck, hail immediately began to pelt the window becoming an icy slime. A light rain continued all the way back to Tucson. We have found several new nude hiking and camping spots. 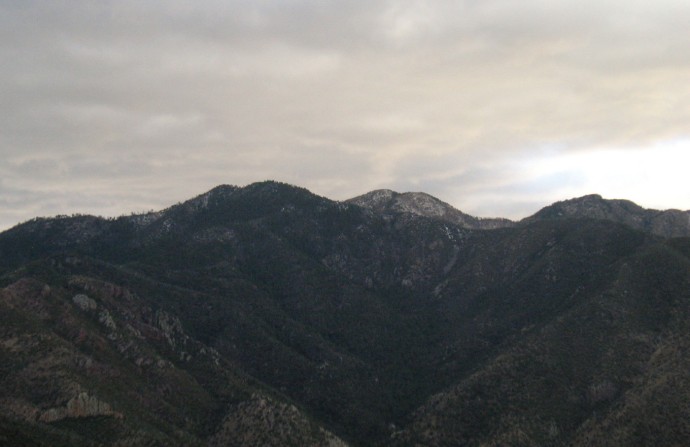 That evening, we greeted friends and played music, singing as a group and feasting. Sun will be shining and the air relatively still tomorrow. There is snow up on the mountains.

2 thoughts on “The Santa Rita Mountains: A preliminary investigation”