We awaken in a pine forest, at the end of a rugged road. We are about eight miles into this forest from the Mongollon Rim.

Continuing in our casual unhurried pace, we break camp. I want to explore the rest of the side road that brought us to this piece of The Arizona Trail. There is a Battle ground Monument near, just a couple of miles further into the forest on the easy road. It is the site of a battle between something like 54 San Carlos Apache and a couple of troops of soldiers with their native accomplices. 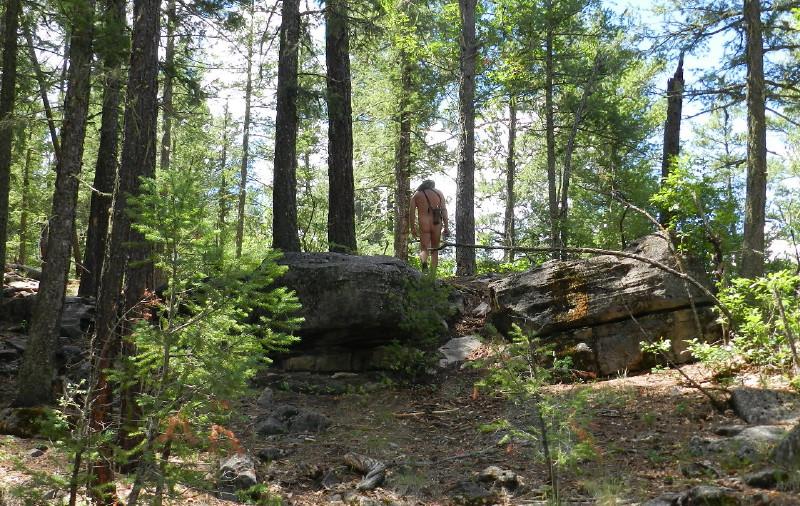 I have read online about the conflict. The Apache had left the reservation. They have been reported to have done such with only the intention of attacking a smaller troop of soldiers. This doesn’t make much sense to me. It sounds like pretext, an excuse to round up some uppity natives that dared to leave the Res and defended themselves from some troops that were in pursuit.  They surely knew by that time that they could no longer sustain a war. They didn’t attack troops who were just minding their own business and happened to be following the Apache up this canyon.

More troops were not far behind. The Apache were up on a ridge and were flanked. Most died. Family was with them.

There were also a couple of dozen assimilating Indian scouts with the troops, to help track them down.

We find the Monument, a bronze plaque placed on stone. It tells the story written by the victors. On the back, listed, are the participants on the “good guy” side.

There is also mention of the nameless, who’s tale would probably be a different one. Were these subjugated people on a reservation, harsh conditions, demoralized, escaping, perhaps desperate and pursued by racist soldiers who are after dangerous savages? The Indian scouts supposedly fought bravely, too. Their identities are listed by the nicknames probably given to them by soldiers, like pets. 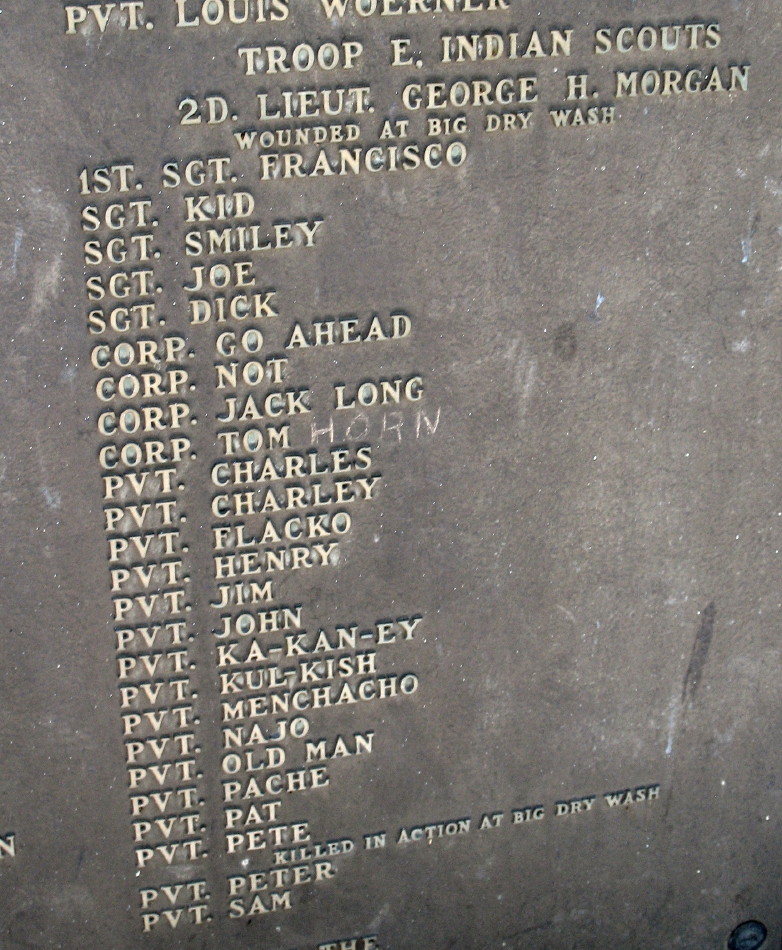 It is down a pleasant trail in the forest, far from most everything. 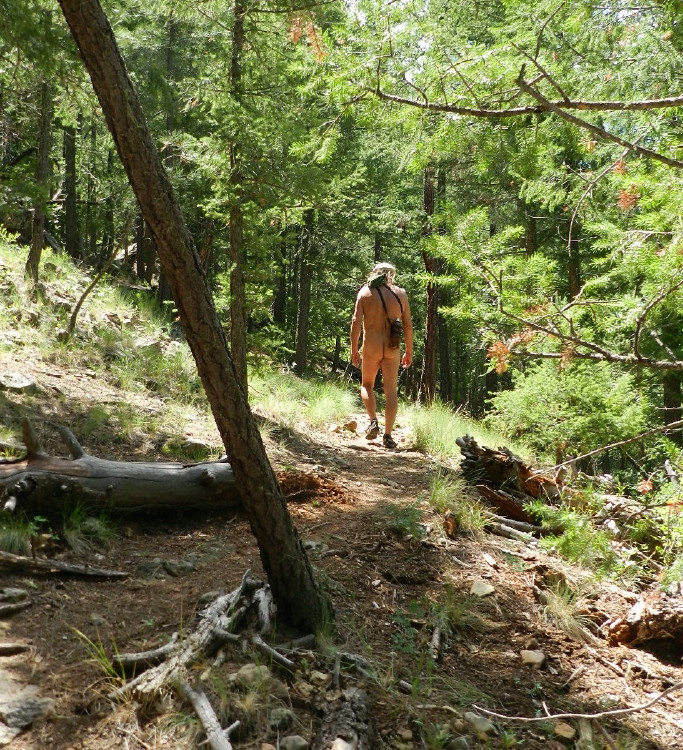 We wander around the small natural fortress, contemplating the escarpment that they used for their refuge.

Backtracking, the other fork in the road leads to the southern part of the lake. I had chosen this area to avoid the crowds of tourist and boaters from Phoenix and other cities. They travel on the north bank on a paved road. Water is a rare treat in Arizona and people flock to it. I am also hoping to find a spot to look down and see a larger portion of the lake and maybe a vista. It is a reservoir, a few miles of channel, a dammed canyon with a wider area around the boat launch.

We travel past a power relay station and the road’s quality decreases. It is not long, when it becomes a steep slope. We stop and get out of the SUV. We have seen no one and still don’t expect to see anyone. This entire forest is our nude park. 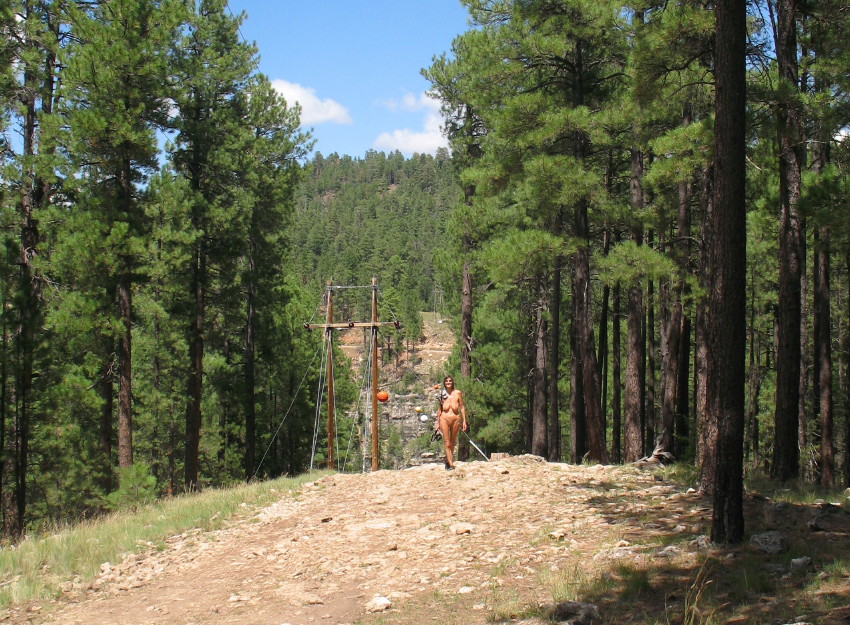 Trees cover the canyon walls. We see only a section of water far below and only because a power line road has carved a streak through the deep forest.

There is no disappointment. The air is clean with fresh scents, the sun is warm on our bodies and we are getting some exercise as a light breeze travels all over us. The quiet here is calming.

Back Out to the Rim:

We decide to have lunch on the Mogollon Rim with its astounding overlook view. Being Monday, perhaps we can find a private spot in the popular area.

We glide on the road back out through the thick forest.

The surface is gravely dirt slowly being overgrown by the short bushy pine trees that line its ditches. 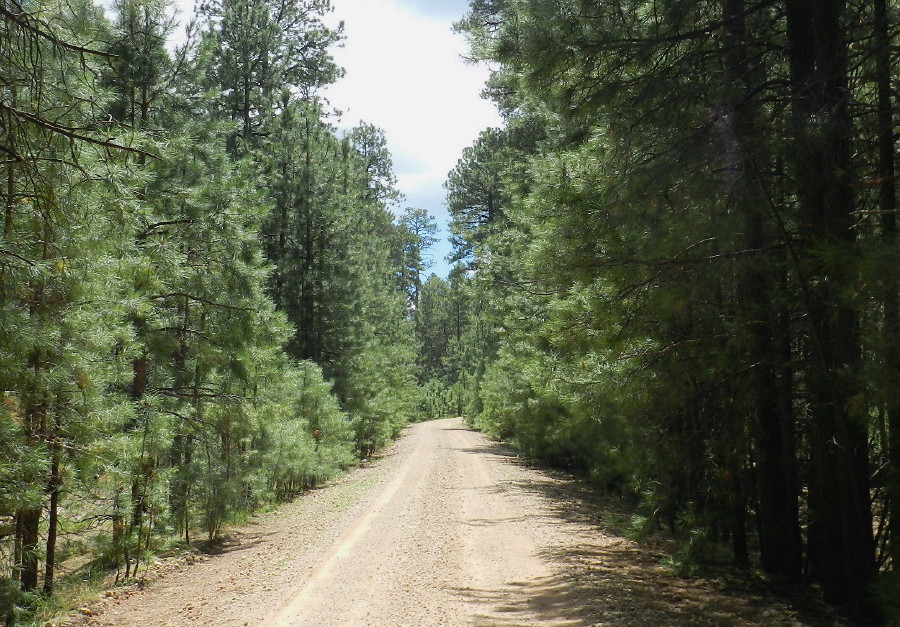 We find the road, which glances across the edge of the rim. 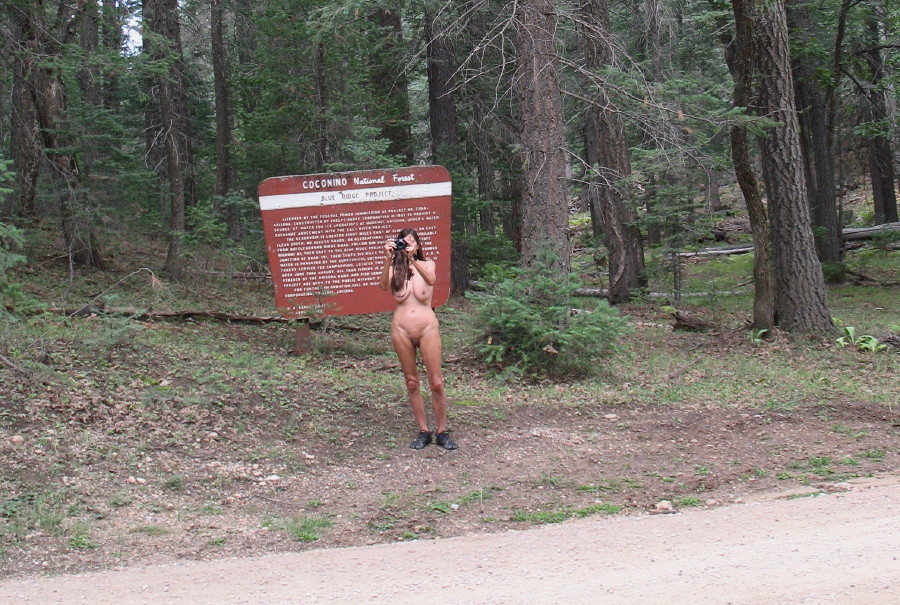 Where the wind shoots up the rim’s walls, we see a few isolated showers traveling along the rim between us and the vistas. Soon, rain is bubbling across the windshield from a cloud burst, which quickly passes. 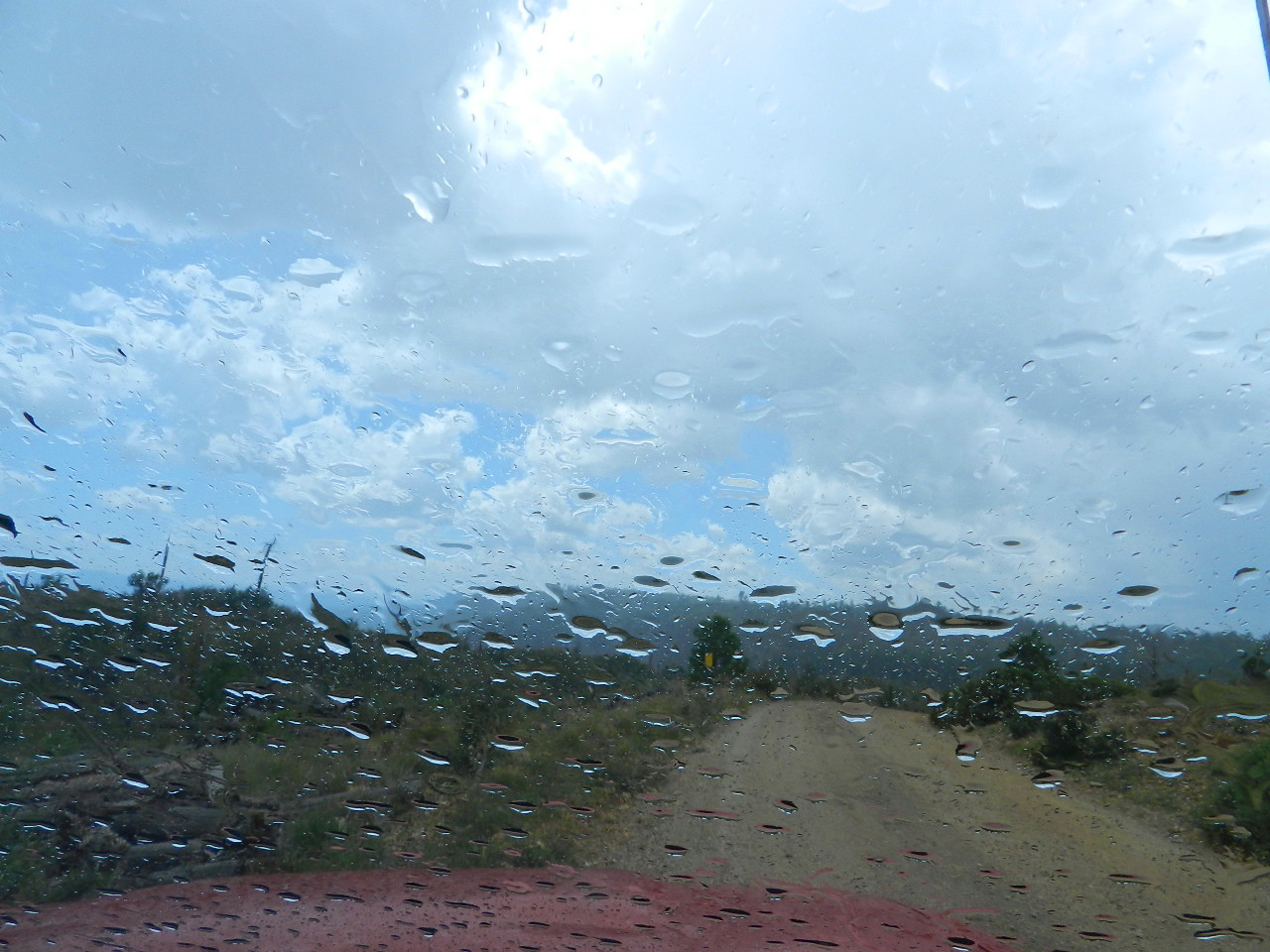 There are places to pull over where the dusty road is wide, but few turnoffs into a campsite. We do find one, but across the way there is another with a trailer parked at the edge of a cliff. I suspect that they are about as happy to see us as we are to see them. Their placement is dramatic. 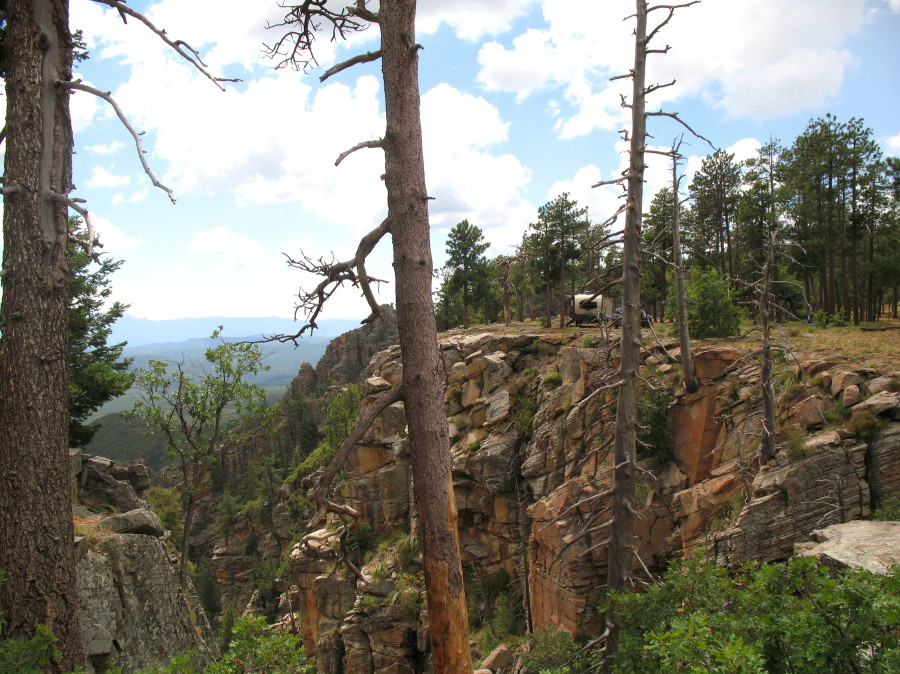 This is a place of wonderment and spectacular. The rim is colorful and rugged.

DF slips a sundress over her head. I get out in the liberated area on the truck side that is opposite the other campers. I casually find my kilt.

The forest ends and drops off like the edge of a plateau. We gaze down hundreds of feet. 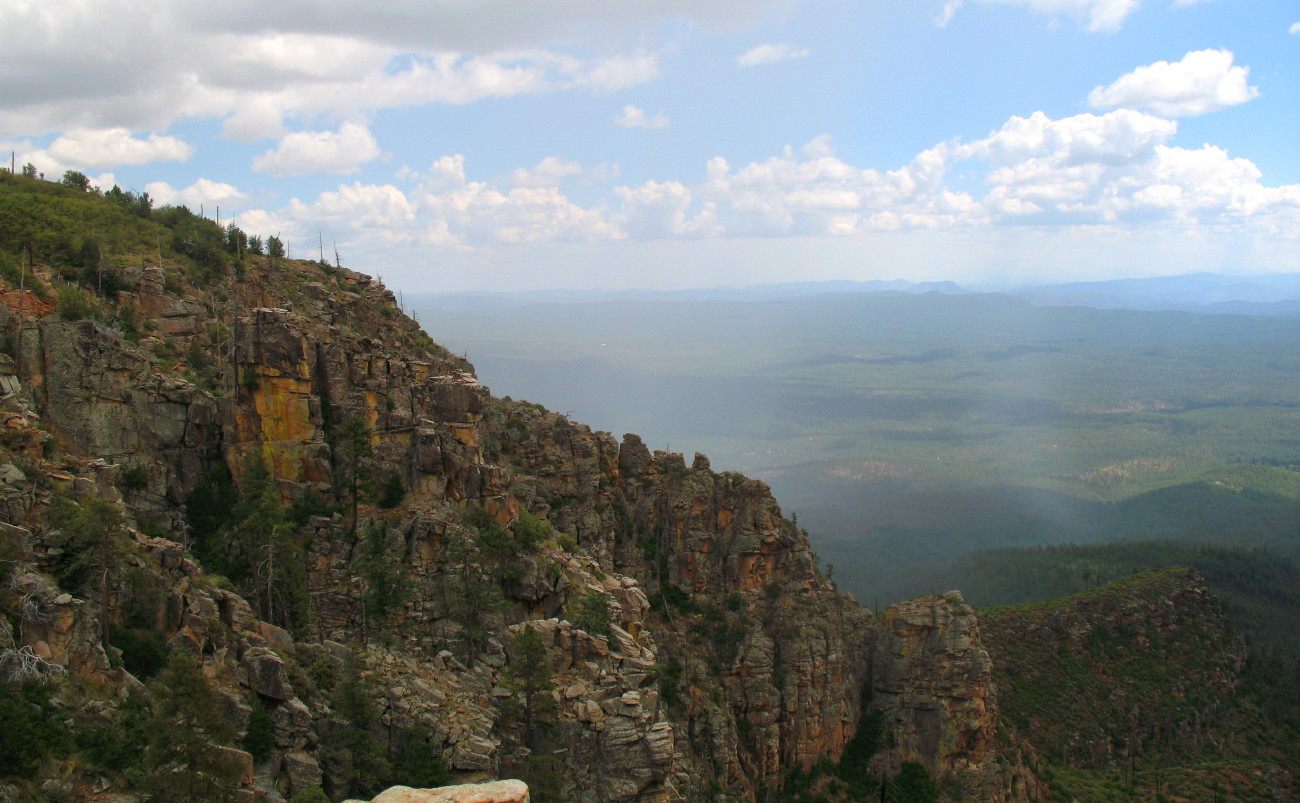 We look out across the rolling hills below. They are green with various pine, covering the square miles into the distance. There is a forest fire out there.  It was just two plumes when we came by a couple of days before. Now they are joined as one. Mountains rise out there, and huge shadows are cast by fluffy clouds.

We have our lunch. There is a short exploration out onto a flat patio of rock at cliff’s edge. It is as if a floating platform.

I find rare phone reception. I go about being sucked into that other world with a pair of necessary phone calls. I get responsibilities set in concern of remodeling the new house and paying bills and then, I hang it up.

The view soon breaks the spell of civilization and we’re back on the winding dirt road, which takes us back to the winding paved road. We pass through the little town noted for its bumper stickers asking, “Where in the Hell is Strawberry, Arizona.”

After an ice cream break in Payson, we are heading downhill toward home. The truck begins to overheat, the thermostat is broken. We spend a night trying to sleep in the parking lot of a convenience store. There is a shade tree mechanic, a tow, expense and twenty hours dressed in public, before our more liberated Interstate highway return, the following afternoon.

Next week, I think I’ll post a story of intimacy with the desert as we climb Cat Mountain.

Be sure to click any image to enlarge it as you desire.

© The owners of TheFreeRangeNaturist.org as of the year 2015 declare. Unauthorized use and/or duplication of this material without express and written permission from this site’s author and/or owner is strictly prohibited. Excerpts and links may be used, provided that full and clear credit is given to TheFreeRangeNaturist.org with appropriate and specific direction to the original content.