We are going upstream from our usual haunts at Redington Pass for an overnighter. Our original plan of three full days on the Verde River backpacking has been decimated by the rain and colder weather that has popped up there. This alternative scaled down event will work out just fine. Saturday, we were in town having diner and celebrating DF’s Birthday. Sunday we are off to a camp-out and Monday we will return in the afternoon to celebrate with dinner for my B-day.

We arrive and park the car. Downhill a piece and through a palo verde tree, stands a guy peaking from behind his SUV. He just keeps staring. It is odd, creepy. A cat and mouse voyeur?  I am not dressed having carnuded from town. I labor to wrap my kilt around my body, while he stares at me getting out of my car. It was obvious that I was driving up undressed and am now getting dressed… As I suspected, he then comes out exposed to me. He isn’t dressed either. He has been hiding, waiting for my next move. He has been waiting to find out if DF and I were textiles. 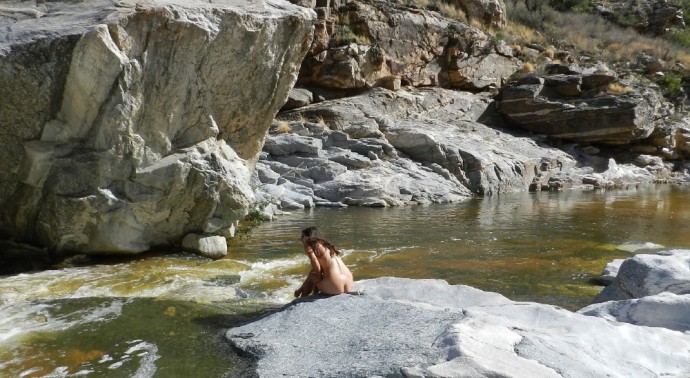 We proceed across the road, me wearing shoes and backpack only. DF is wearing a white men’s dress shirt to cover from the mid-day sun. We may have been noticed by some boisterous textile newly graduated rowdies in the distance, but probably not. Clear out and into the canyon, these rowdies are still heard shouting, both obnoxious and vulgar.

So goes a graduation week. We make our way to the lookout into the canyon. There below us, we see three bikini clad young women on the beach a hundred feet, or so, below.

We have taken the high road as planned, inadvertently avoiding that encounter on the first beach. As we reach the peak of the ridge, the three are seen dancing and shouting “We want to see some booty, we want to see some penis.” We wonder if they are yelling at us, or just yelling. Rude and rowdy and textile, will you please, stay in your own areas.

As we continue, now down in the canyon, we encounter four textile clad men. This is an unofficial nude area, so we don’t care what their reaction to us might be. They have been warned about the nudes. 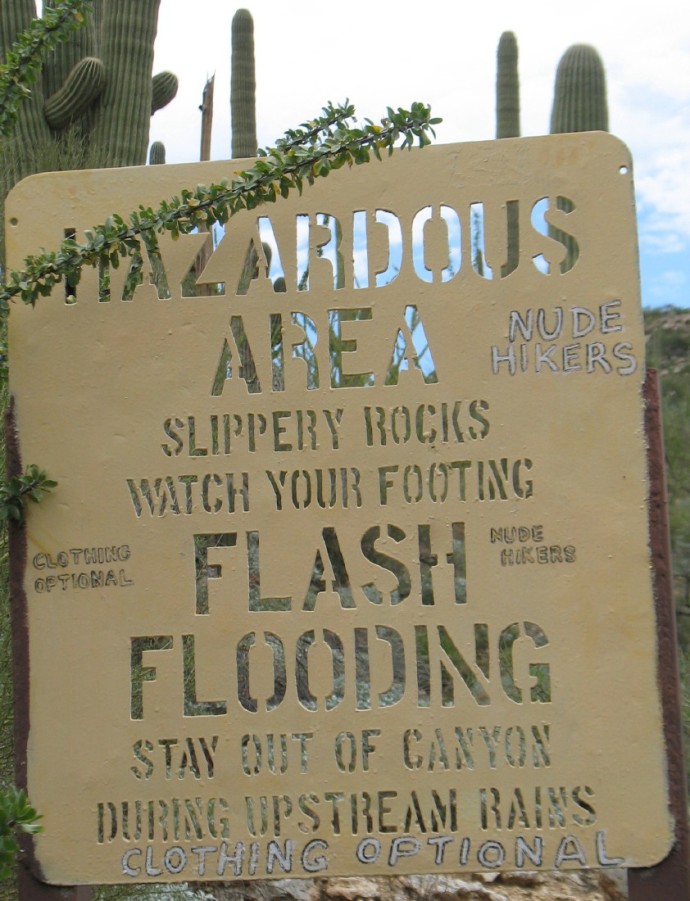 After they find their spot on a rock, we might find that they are nudes themselves. One has crept up on us and passes us as we dawdle by the water. He is staring too hard at DF. He appears to be interested in her nude sight, probably voyeur behavior. We see him ahead a few times as we travel on upstream. Our social and political repression of the sight of other human bodies tends to create things like this. It is important to not let the behavior of these poor products of injustice creep us out. 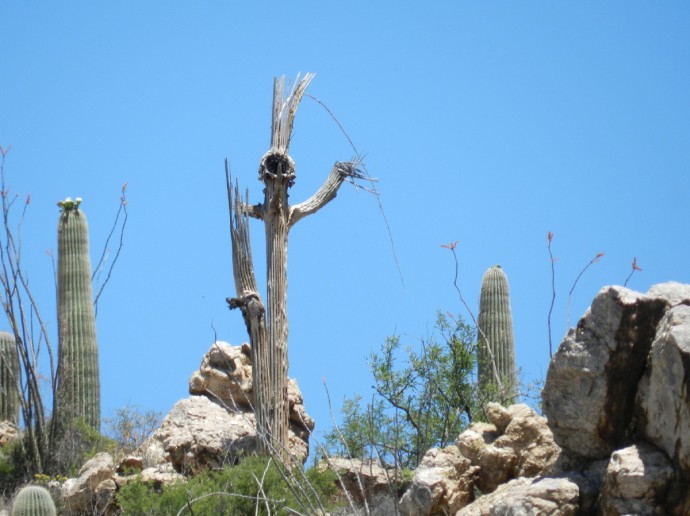 When we eventually arrive at the area where the canyon opens up and the tall cliff walls disappear, we look over two potential campsites. One is in the immediate area, close to the jeep trail that crosses through here. We wouldn’t expect a vehicle visiting, or even hikers. I know that the road getting here requires specialized rock hopping equipment, or foolish risk with nerves of steel.

The other is a place where we had had a picnic sitting on tall lush green grass under a pleasant tree’s shade. This day, it is just dry straw-like remnants. 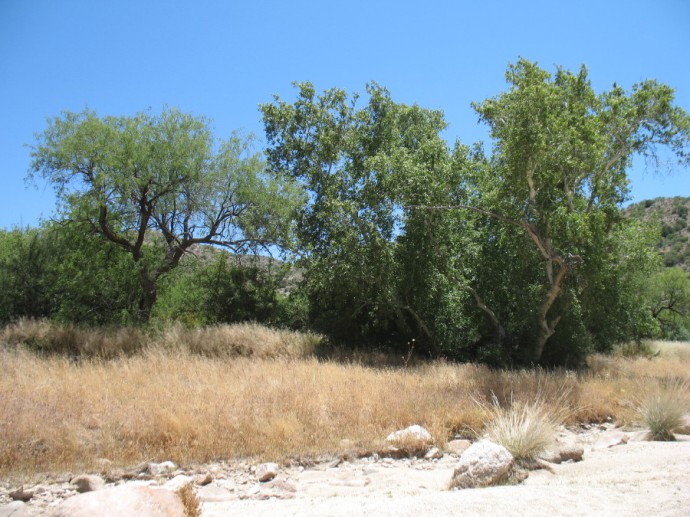 The water isn’t flowing peacefully in the stream either. It is a dry sandy wash, today. 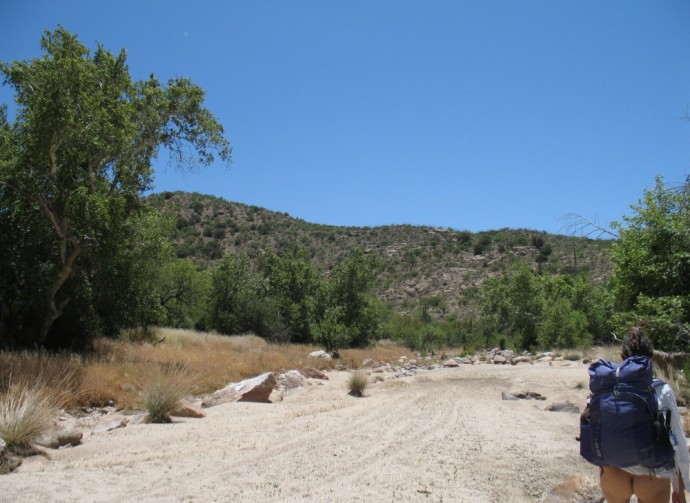 We then continue on toward the Olympic sized swimming pool that we had found when visiting on February 18th. 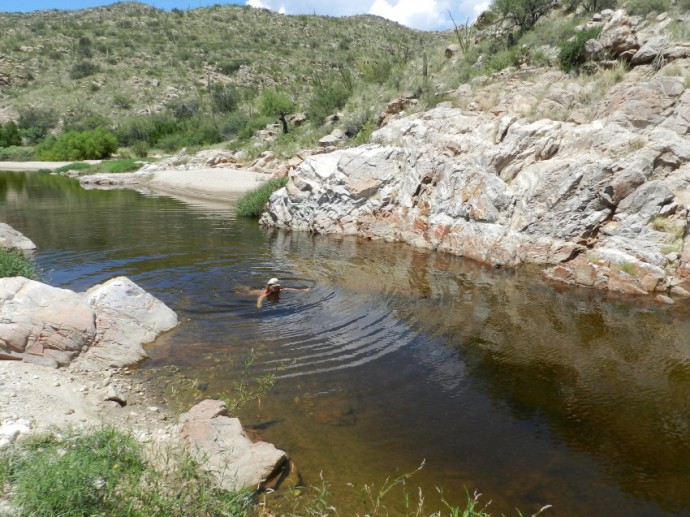 It is missing much of its size, today. I had expected water flowing from the previous two days of rain and snow upstream, but there is only ponding left for us. 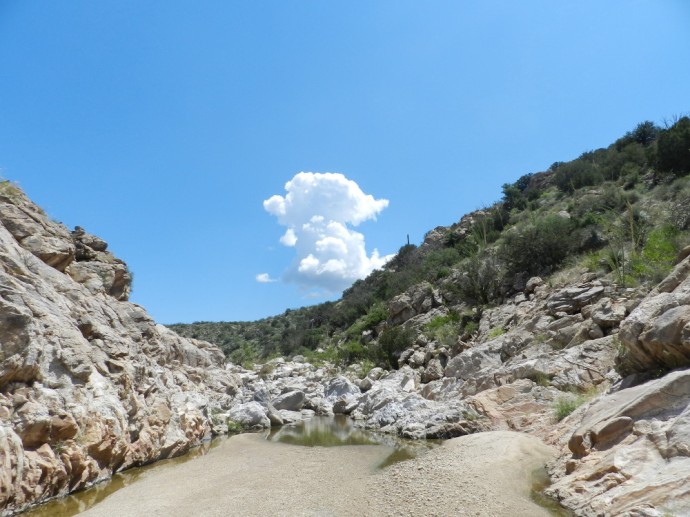 In the ponds, there are many tiny fish swimming in schools and tadpoles. We can hear the fish responding in mass to us, even when we are 50 feet away. We wonder how they are detecting us from such great distances.

We decide to return to the second campsite.  As we return, we have our trail crossed by one of those harmless water cruising gofer snakes.

At the campsite , we leave our stuff to mark territory and go to find clear water to filter, drink and cook with. While we are standing knee deep in a strip of pond cradled in granite, a nude man that we had seen another day comes by with his small dog. We exchange pleasantries and pick his brain about further upstream. He lives near and comes to the canyon often walking his dog.  We mention that we are curious because we will be camping out. He looks at us, our water filter and over at our shoes, which are away from us on the granite, “Wow, you are traveling light,” he exclaims.  We have to explain that we have camping gear upstream. 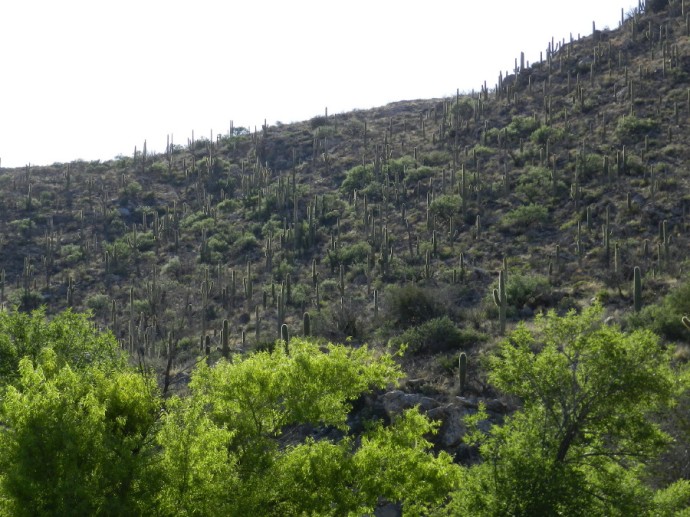 Our chosen spot is under a nice tree, and near a three tiered slope of sand. 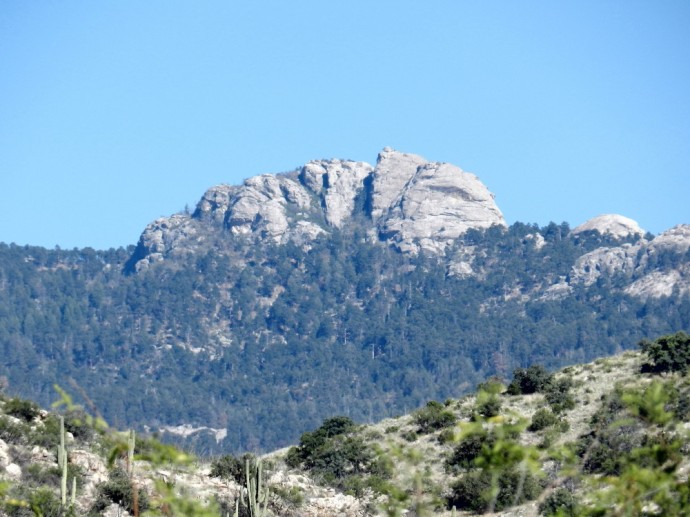 View of Mica Mountain out of the Tent

It is difficult getting even the heavy duty stakes to adhere in the sandy soil. 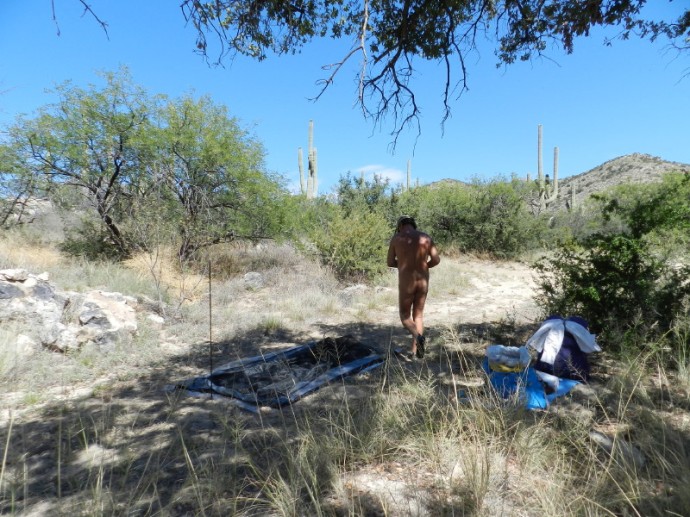 I have to place rocks onto the tent rope and stakes. The poles are tending to sink into the ground, but during setup, that is a helping hand when they stand up by themselves. 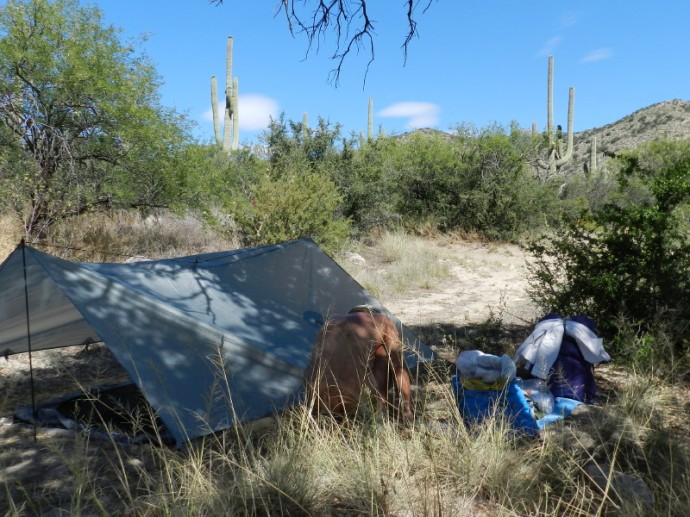 Getting the Tarp Firm

After setting up, I stay and work on the tent, blowing up mattresses and arranging. 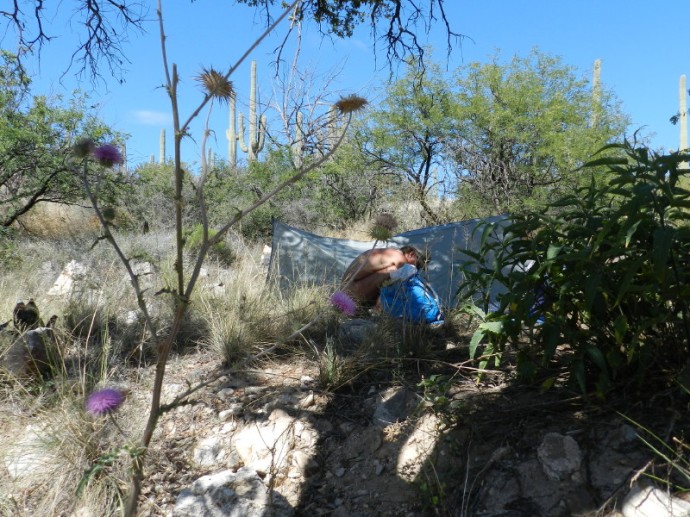 Down the hill, DF has found a perfect boulder to cook on. 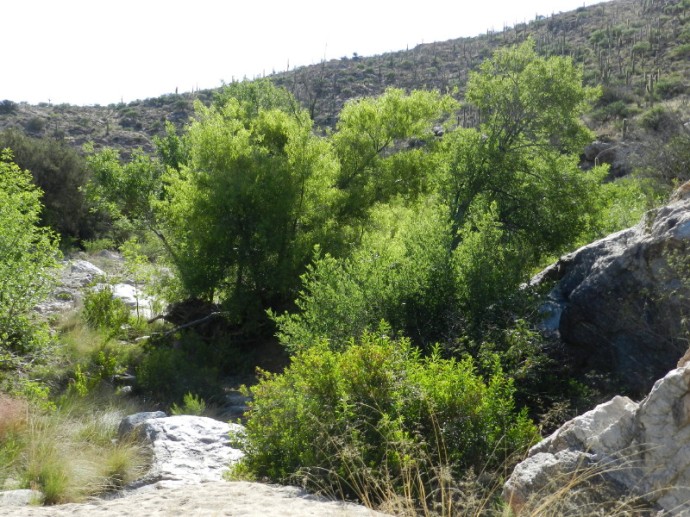 It is a colorful red and comfortably smooth. 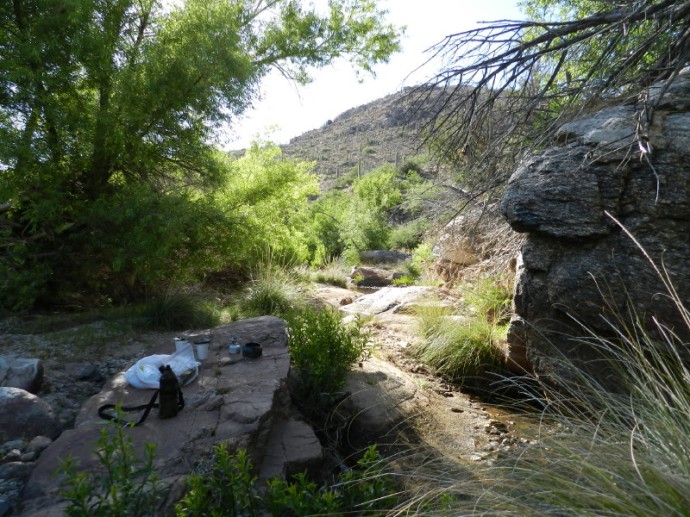 It is surrounded on three sides by water in a small moat. There are pleasant views. A large tree is providing shade. 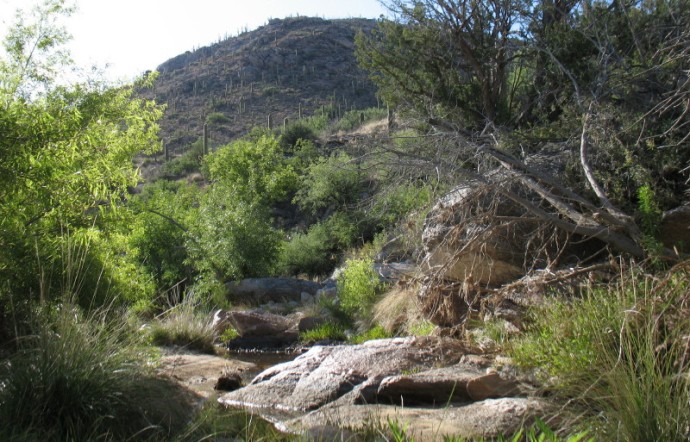 When DF gets back from the kitchen, we lay down in the net tent trying out our new ultralight Klymat sleeping mats. She sees a man pass by on the nearby jeep road, and then a woman. We have to wonder where they came from. They would need a vehicle to come from that direction.

The woman looks up from watching her footing on the rocks and voices a surprise, startled to see us.  It occurs to me that she might have interpreted us, a nude couple lying in bed, as a couple making love. We’ll never know. 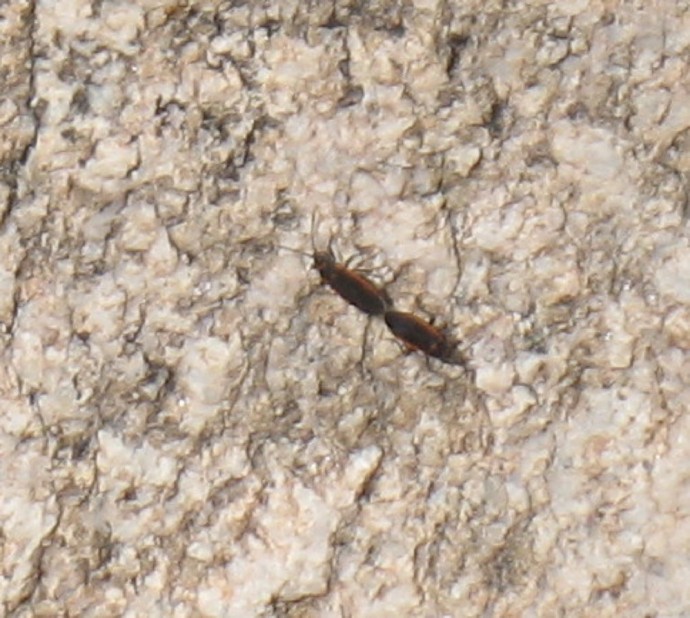 Eventually, we go down to the nice big red rock to have a tasty re-hydrated spaghetti dinner, eating where DF has prepared it. 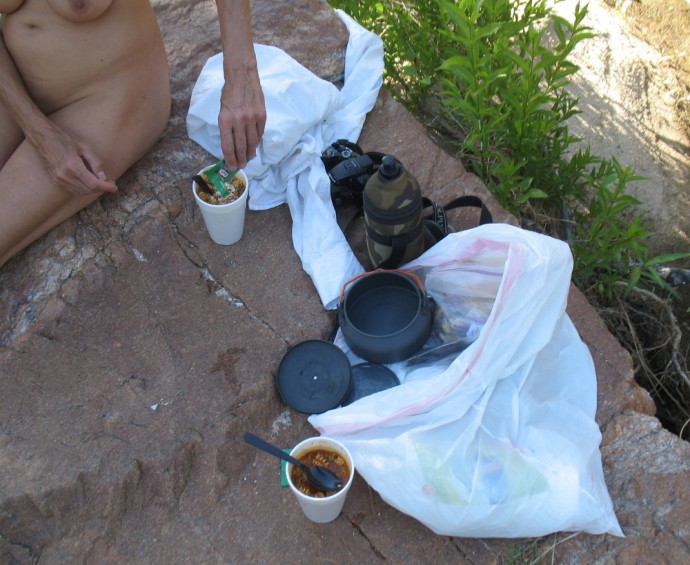 As we sit there, DF mentions a snake behind me, only about four feet away. I twist to behind me and I’m startled to discover a very fat, very large rattle snake. Grandpa is moving slowly.  It is over over eleven years old, by the number of rattles that I am able to count. 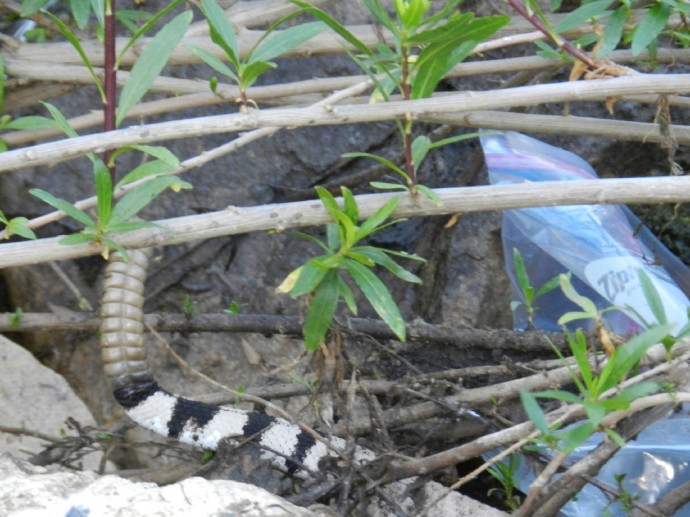 Close Enough to Count the Rattles is Too Close

It disrupts our dinner to say the least. It even starts to climb up onto the rock with us, two barefoot naked all over people. We have water on three sides and I’m trying to keep my cool while being alarmed. I wonder if it is blind in its old age.

I throw a small rock to warn it off. The rock bounces over the snake, but lands close to its head. I have my concerns that I might just piss it off, but it takes heed, slowly slithering off into the bushes. You might imagine that it wasn’t an ideal dinner guest. My mind wonders if it might return and how many grandchildren it may have been blessed with. 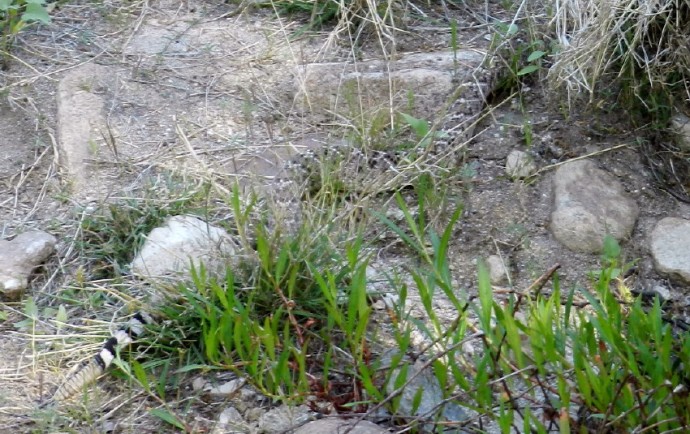 Off to the Bushes

As I wait for the adrenaline to subside, the sun is sinking to the southwest, above the hillside. Each of the multitudes of saguaros have their needles lighting up like a silver aura as the sun shines through them.

I prepare a fire and light it as the stars come out. We watch the fire from a log that we had placed as a bench. 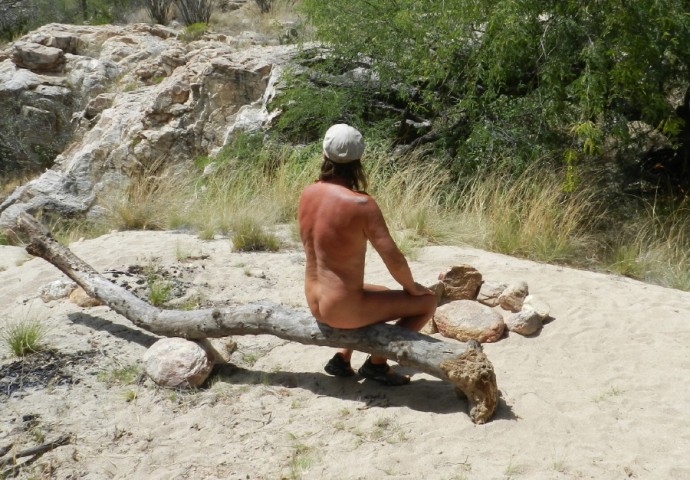 We smell the yummy mesquite wood burning. Occasionally, we stand up to watch the stars. An empty Big Dipper pours its contents upside down and planets ask for their names as a game. Things in the sky shift, rising up out of the surrounding mountains to the east and disappearing into the canyon walls to the west of us. The night air has no chill. We remain naked, in touch with the elements of our natural surroundings. 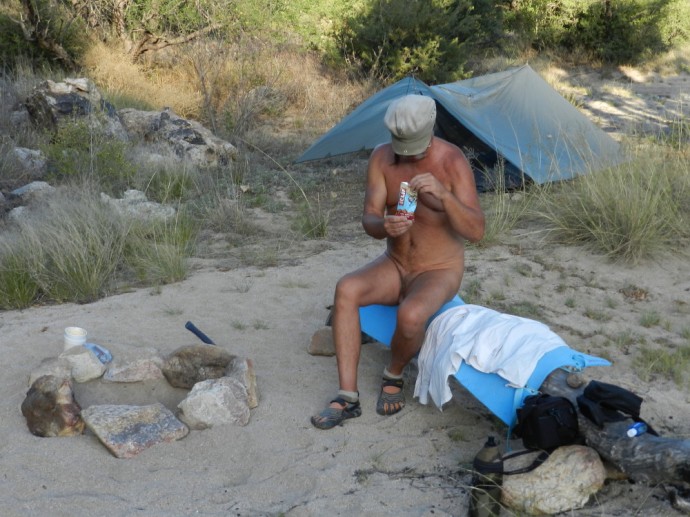 The next day, my Birthday, the wind is picking up. We go for water and in a very relaxed pace. We hang out, brake camp and begin to mosey downstream to leave the canyon and then head home. 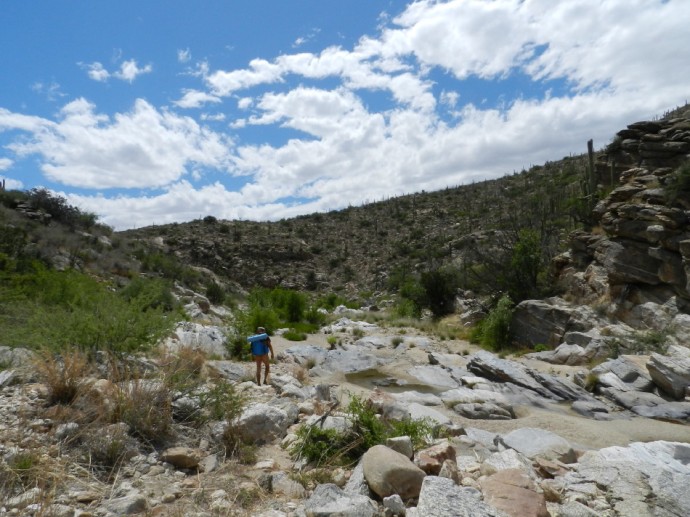 Around a familiar bend, the canyon develops straight high walls. It is here where it gets narrow. This makes an effective Bernoulli’s tube, giving us what are probably gale force winds.  They sometimes are powerful enough to push us around. This high wind area is also the best place to get more water. One pond is just ridiculously windy, but the next is tolerable. We shed our packs and shoes to stand in the water completely lusciously naked. 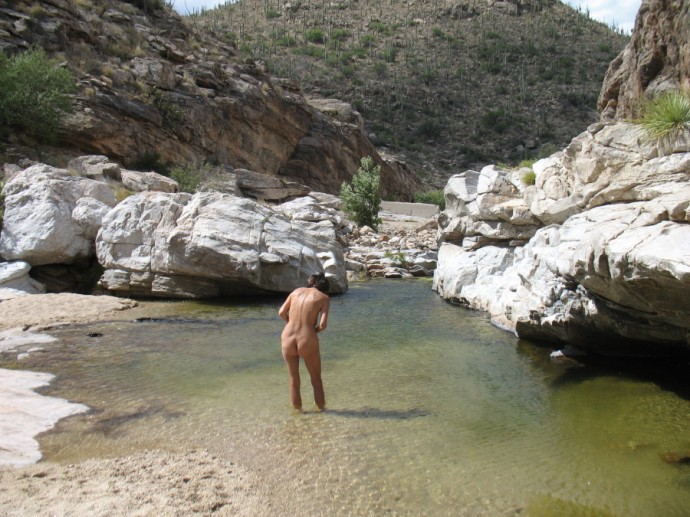 This pond is only maybe forty feet long, but none the less, it has small white caps on it. Imagine a small swimming pool with white caps. 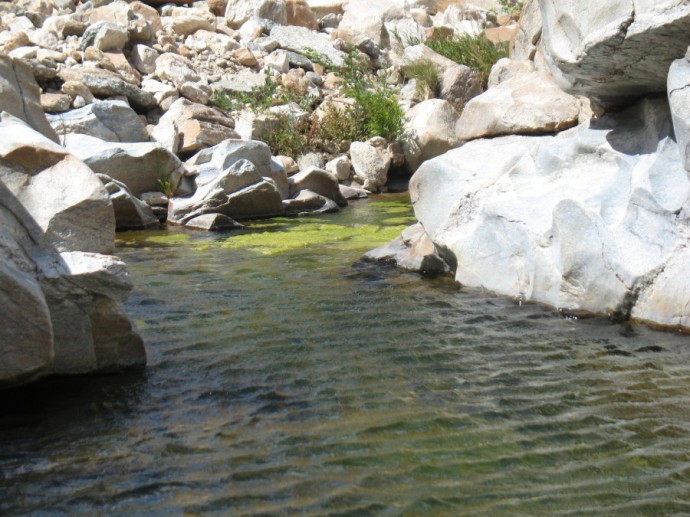 We have to shout at each other to hear. I can no longer wear my hat and place it in my backpack! 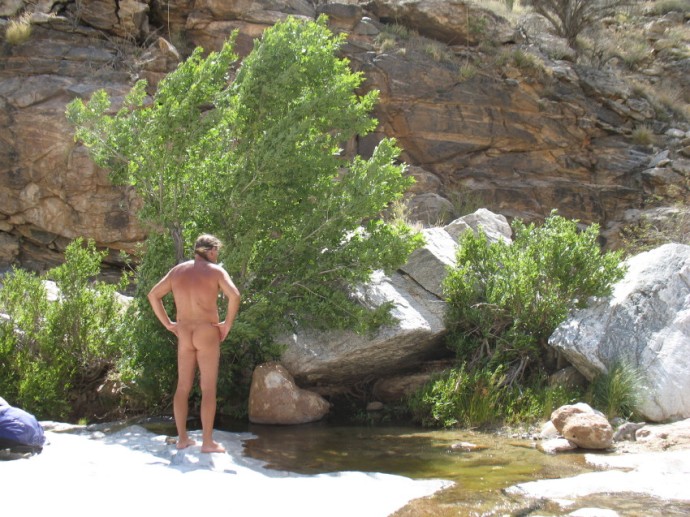 We find some shade to take a break and eat. 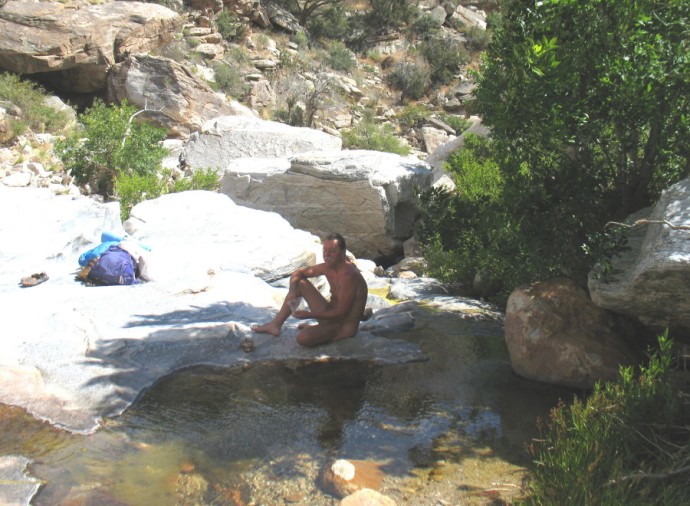 As we sit there on the smooth granite, occasionally a gust makes our skin feel like we are being sand blasted. There is a sting from the tiny particles.

We leave in our relaxed time. A little further, we find a small rock message in the sand made of pebbles. It reads, “Are you naked?” There is a pile of rocks marked yes and a spot to place your “no” vote rocks. The “yes” pile has ten small rocks. The “no” pile has only one larger rock. Ten to one, nudes have it. 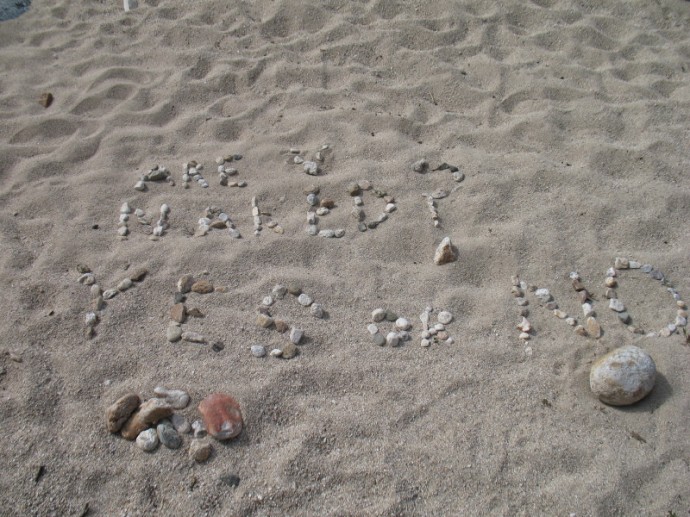 As I climb the hill’s trail, sometimes literally climbing on all fours, I stumble onto a small red rattlesnake under a shading rock in the trail. Alarmed, I quickly jump over it, as I pass. I make some sort of indescribable spontaneous sounds that warn DF, who is coming up behind me. At first, it is so reddish pink that she mistakenly thinks that it is some old Indian pottery. It is difficult, but she gets around the danger, too. It really doesn’t want to be bothered. It brings its head back into its curled mass after we pass.

At the top of the ridge a wind gust grabs our backpacks, twisting us around. Tough wind! We watch the view from on high, windswept all over. 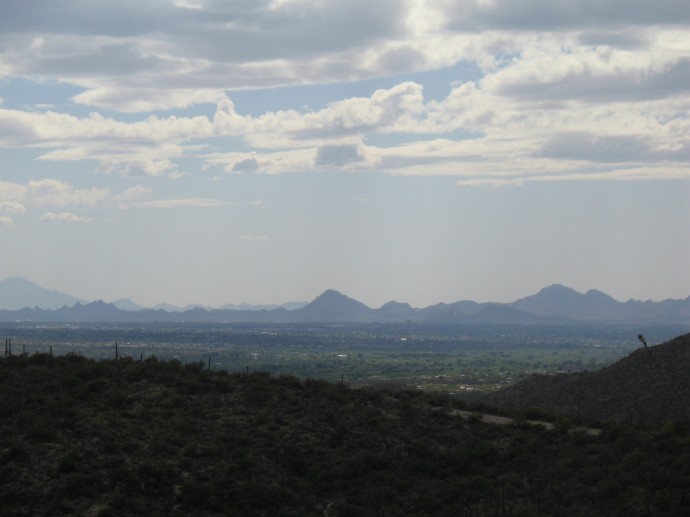 Tucson in the Distance

Arriving at the nudity warning sign next to the road, we have to cover up. We have had a very liberated brazen nude outing. This is disgruntling. There are two cars right next to ours and two guys in them. We can’t be sure why they are there.

We get in and disrobe enough to call it carnuding and drive in comfort all the way to DF’s place. We clean up and go out to a fine sushi dinner. We enjoy a transpersonal energy circle, then relax with ice cream and our shared affection.