La Paloma is a wonderful resort perched up in the Catalina Foothills, an upscale part of Tucson. There are all of the amenities and plenty of golf.

I’ve lifted several photos from their website to illustrate our story. It is actually as nice as the pictures. Their Website: http://www.westinlapalomaresort.com/#2

We met friends at the Westin La Paloma Resort to celebrate DF’s Birthday. We populated the happy hour with several tables of friends after work. We lavished ourselves on cocktails and horduerves as the party conversed. DF opened presents, as well wishes and affection washed over her. 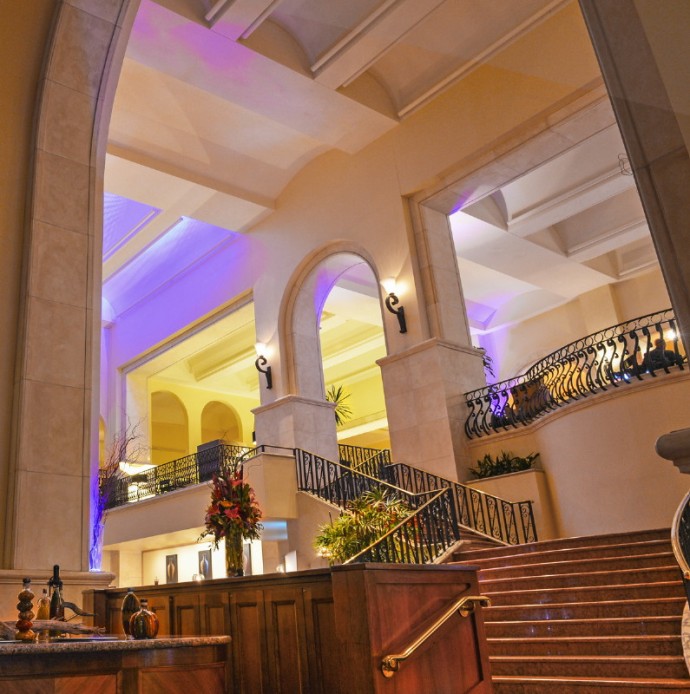 Inside there is Opulence

As things were winding down, about 7:30, DF decided that she would like to take a walk around the grounds. This is a very elegant resort, multilevel with staircases and large windows looking up at the Catalina Mountains north from their foothills. To the south, as the sunlight disappeared, the famous lights of Tucson twinkled below in the valley. We meandered about and then out the doors with their brass bars. We strolled through the outdoor dining and fire pits and into the pool areas.

In the calm of the evening, there were scattered guests in swimming attire. There was a woman in a short cover-up, which gave me an idea, for later. As we sat on two lounges, we commented that there was all of this great water and we couldn’t use it. DF had had a couple of potent drinks, she is a lightweight drinker and was having an attitude of adventurous fun, perhaps a little wild. It IS a birthday celebration. 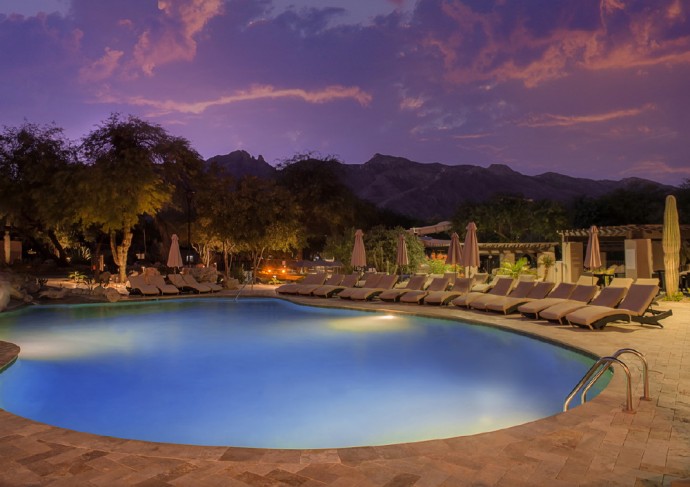 We found an area with fake rocks and pools where a huge water slide empties people out. We wandered about, looking for the entrance to the slide. As I followed DF in her exuberance; I scoped the grounds, getting acquainted with them. We walked around this section, finding the slide closed without the attendant on duty. We then proceeded around through the fake rocks again and back to that pool where the slide empties. 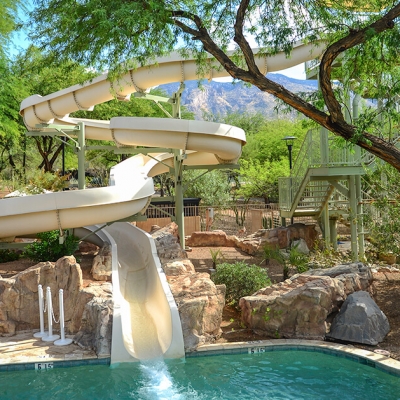 DF says, “I want to go skinny-dipping. I haven’t been in the water yet this year.” Her lead found us down a set of steps leading to the pool with walls of rock on each side. There around the corner, flowing into the pool was a waterfall. DF pulled her pant legs up and stepped down the steps, stopped and sat. Alas, she thought that the water was way too cold for her.

I followed her lead and found the water tolerable, if I let myself get used to it. I gave the situation some thought. My underwear could pass for a speedo in this dim light. I cautiously stripped and wadded in, stashing my clothing up in the fake rocks. Checking the surroundings from the pool, around the corner, I could see people and they could see me. It was darker where I was, I was in the shadows of night. The angles from where the others were and the lip of the edge of the pool hid my lower body. The dark rippled water obscured me as well. I figured that I was good. It would even be difficult to make out my nudity, even if they were closer and looking down. Anyone would have difficulty seeing what I was up to, but it was not impossible. They would need to stare to be sure, if they were to walk over to where I was. If anyone came to use this pool, I would be stuck without the jockeys until they left. I figured that would be just bad luck and most likely there would be no one joining me.

The jockeys would need to come off anyway to put my pants on, I figured. I slipped them off immediately feeling the superior sensations. I waded over and dumped them next to DF. I was really enjoying myself.

Steps Where We Entered and Sat the Pool

At that waterfall the water was warm and cascading down. I became more adventurous and calm. It was a pleasure to be swimming nude in plain sight on a relaxed evening. It seemed as if it was almost alright to skinny-dip. It was as though no one cared.

Eventually, I climbed out and sat next to DF. I sat on a complimentary towel and used it to coverup some. Otherwise, now without the cover of water, I was exposed to anyone using the distant path. I had to wait to stand as a woman walked by there. I grabbed my black long sleeved t-shirt with the long tail on it. It just about covers my crotch. I remembered the woman in the swim coverup earlier and realized that I could get away with moving around in just that T-shirt. Pants could be put on with none the wiser, if I kept myself at a side angle to them, or bent over facing them. The pants came back on easily in a rather public setting.

DF got creative and the underwear was wadded up wet and wrapped around the stems of the flowers that I had given her, at the bottom of the clear plastic carrying vase, in plain view, like it was a part of the decoration of the thing. We meandered down to the car and drove back home, enjoying ourselves. We stopped for a foothills vista view of the city lights, here and there.

If you are ever in Tucson, La Paloma is a wonderful destination, even without the discrete activities.