This is a continuation of Pt. I, which is here:

Remember, when you click the pictures the quantity improves.

When we left off last time, we had had a walkabout out in the direction of Ol’ Ragged Top, a lunch and a siesta.

As far as we can tell, we have this vast monument to ourselves. The road isn’t that far from us, we can’t always hear other vehicles for the noise of the generator powering the air-conditioner. We see only one red pickup truck, which is one that I had encountered a month or more ago, when we had been enjoying the spring flower masses. It is a couple of locals, privileged to live grandfathered into the middle of this grand preserve.

As 5:30pm approaches, we all climb into my 4×4 to explore a trail that I had seen from the satellite map. It appeared to go up the southwestern side of Ragged Top, a good place to catch a sunset.

DF and I climb in nude, but our host isn’t used to traveling so light. His new girlfriend, although taking things like a duck to water, is still relatively new to free range naturism. We soon find what appears to be the walking trail, and discover it to be a jeep trail as well. We began to lumber through the desert forest.

We stop to get some pictures and for me to twist my front lockers, which then transfer into 4×4. I have turned off the motor. I then, I hear a quad coming down the trail. DF and I climb in the truck for cover. Those approaching can’t see us. They are coming too rapidly. The two helmeted young men don’t respond to us and fly past, off the jeep road and then back on.

We continue on an increasingly rugged trail, as the sun drops. 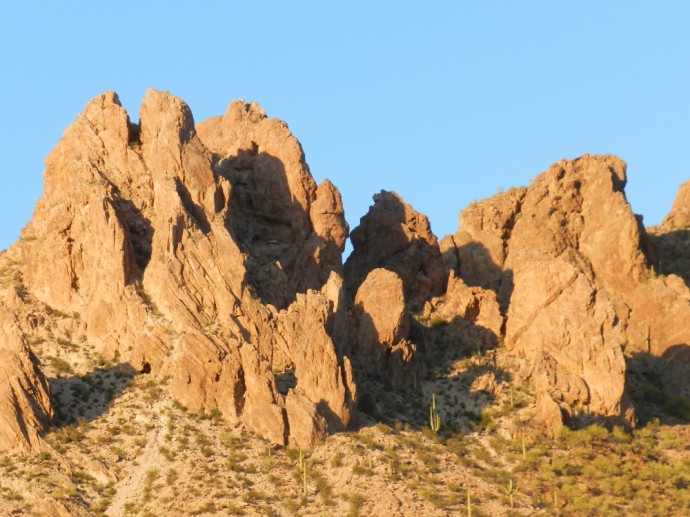 The road has led us to the opposite end of Ragged Top, as we expected.  After a climb, a steel fence and sign forbid us to drive any further.

We continue uphill on foot, as the mountain takes on a rich orange hue and the shadows increase in length. 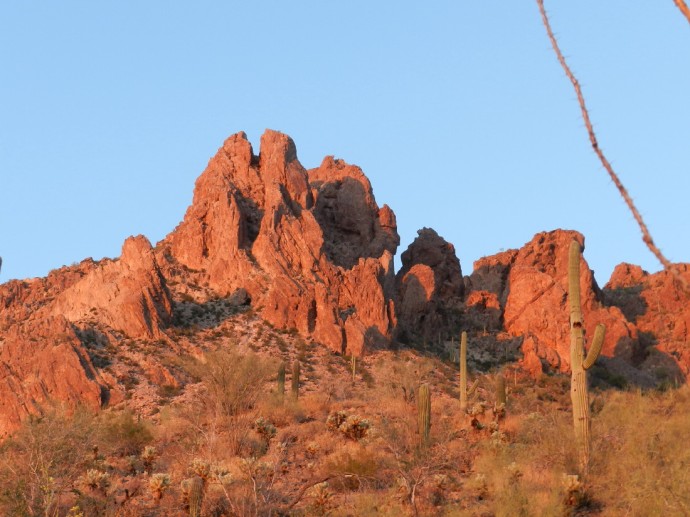 The vista here is tremendous. There are hundreds of square miles of Sonoran desert in the distant west, untouched by “progress” all the way into the Tohono O’odham Nation. 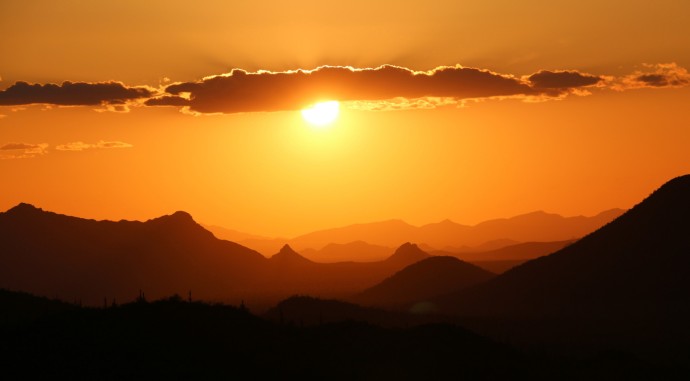 Where the road ends, we venture up to a couple of abandoned mine shafts. 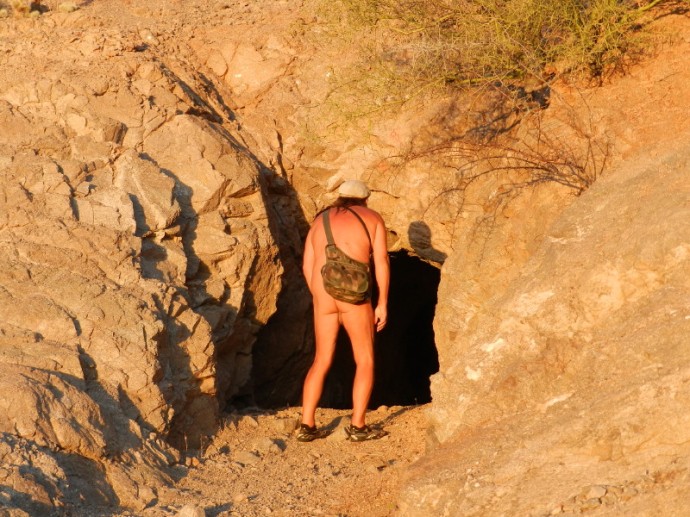 The entire mountain has transformed through a bright orange hue and into a deeper red orange.

The miners dream of gold riches is only golden light, free and in abundance.

As we look around, our bodies have also absorbed the sunset’s tint. We stay as long as we can. We arrive at the truck, just as it gets too dark for comfort without a flashlight. 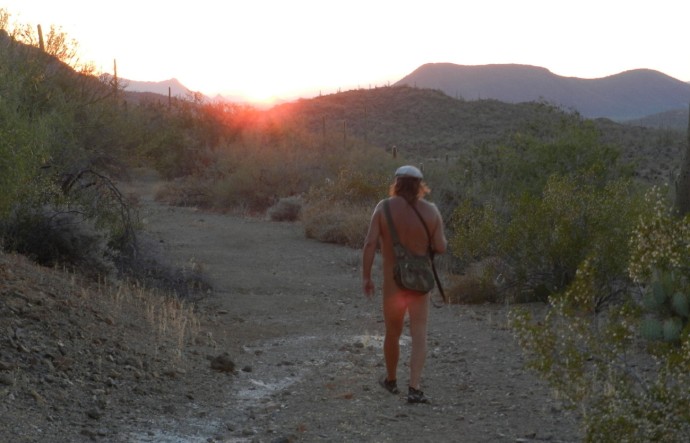 We cruise back to base to enjoy another evening under the stars by a fire’s warmth and enchantment.

Deciding to get an earlier start, beating the increasing heat, we take off again in the general direction of Ragged Top.

One of us had used a telephoto lens and stumbled upon the tank system used to water the big horn sheep.

We have thought that we might get a closer look at that. We go further, following another fork in the wash and returning through a new route, randomly. 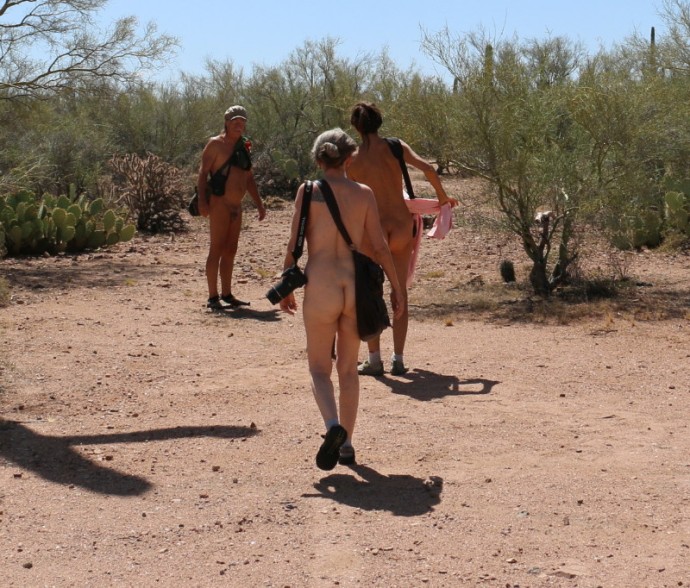 I find a couple of wonderful energy spots, one happens to be an interesting rock outcrop that we all wanted to check out.

The other, I am just led to. You know, there is sometimes a sense that guides. You don’t know why, but it just seems to be the right thing to do at a particular moment. It has a red rock floor with contrasting green vegetation. It just feels really good there. Two others arrive soon after and concur that they also feel it. We all share that the nudity and natural meander gives various extra awareness’s that “you just can’t get with clothes on.”

Jack and the Saguaro Stalk

I picked up on the energy spots about twenty years ago, when a friend taught me how to dowse for them. He showed me how to use a rod fashioned from a coat hanger. Each time that I walked down the jeep trail on my property with the rod, it would swing back at the same spot. I then put this to the test and had five others, who had not dowsed, or had any belief, do the same. The rod behaved exactly the same for each. It was fascinating. Since then, I have noticed these spots from time to time. They seem to be vortexes, circular, or oval. They are a place where I just feel a peaceful goodness. It feels like home. They are apparently some kind of electromagnetic. They are often formed by water, usually artesian, or a buried meteor, or crystalline structures below the surface. It is the earth’s energies, both positive and negative. They are associated with ley lines. We both do energy work with our hands, etc., so I’m more sensitive to it than I used to be and certainly more open to it, especially when I’m just in the moment, wandering naturally. 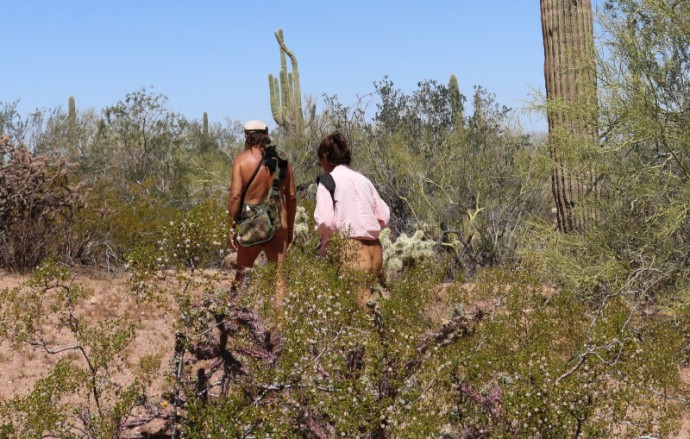 In India, there is a special place where it is said the spirits of the great masters and deities accumulate and hang out. There have been an unusual number of these holy people in the region. All visited this place. When I arrived, after crossing a stream, my consciousness suddenly changed for the duration of my visit. While just walking around, I began to find crystals lying about. Some were a foot diameter just lying on the ground, some were like broken glass. Crystal’s energy has been known to be associated with this stuff. 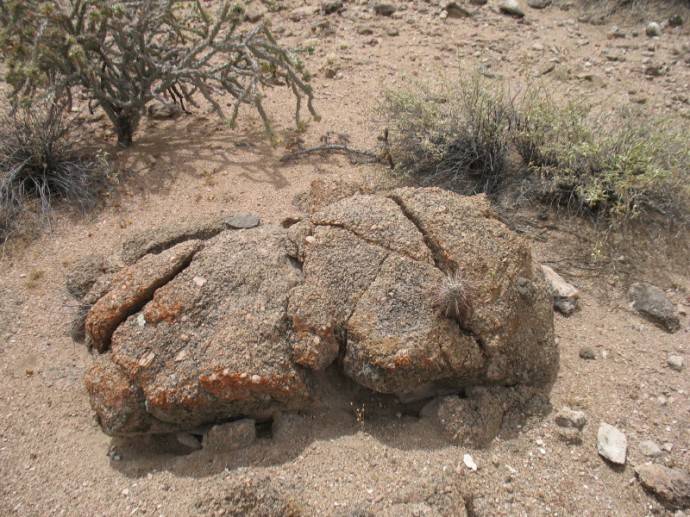 There is an open pit mine behind Ragged Top. 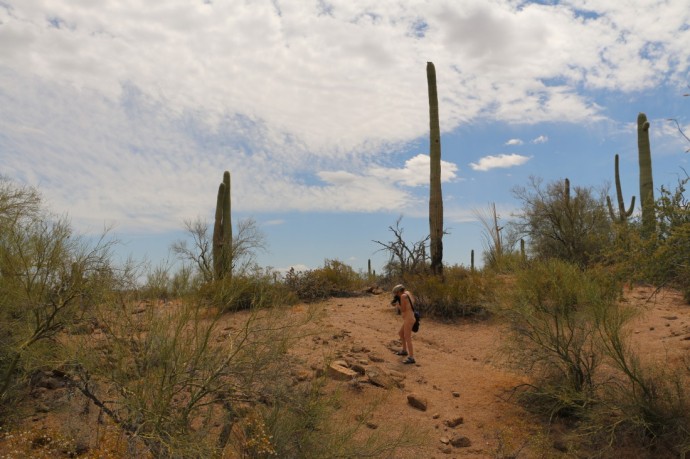 There has been a variety of mineral wealth extracted from it. There are many variations to the rocks in the monument area. There are spots of completely different qualities.

A Curiously Different Form of Granite and Quartz

The last trip out there, we found a place with crystals littered on the ground about a mile and a half away here, so there can be crystal formations in the area. This “spot” was on a small hill. When I arrived and felt it, I then noticed that the rock was reddish, different from most of the area. It is dome like, so it could be that artesian water, or a crystalline cavern lies below, but all I do know is that I felt like I didn’t want to leave. I wanted to stay and sit, be there and be grateful. I am led intuitively and then these things pop up when I’m not looking. Energy varies through the earth, but some spots are not as subtle. Again, the Monument has a magical quality, very beautiful.

I have mentioned, this wonderful place has a magic to it.

A quarter mile from the camp, we find a pile of rocks with a white wooden cross in it. The cross reads simply, “Ron, 1938 to 2006.” If one’s ashes would rest eternally peacefully anywhere, this would be one of those places. This is a good place, a protected place, a spiritual place to have ashes spread. We suspect that this is what has happened to Ron and he has been given a simple monument in love. We give respects.

As the sun ascends higher, we pull shoulder protection over. The difference in tolerating the heat, while draped in cloth, is soon commented on. It is definitely more comfortable to go about completely bare, no compromises, simply be bare. 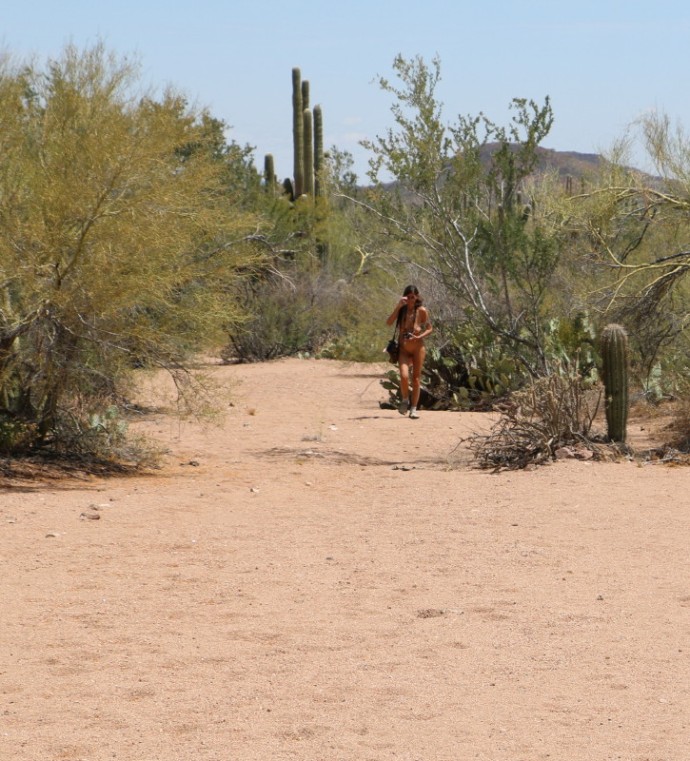 Outside, we sit for a while soaking it all in. I have brought my new didgeridoo. It is played by essentially blowing raspberries into the tube. I’m new to this. The tone often sounds like someone blowing raspberries into a tube, or a growling stomach amplified. Other times one can distinctly hear the cry of a lonely water buffalo. It is a humorous entertainment and then quickly becomes an irritant. I will practice more…alone. 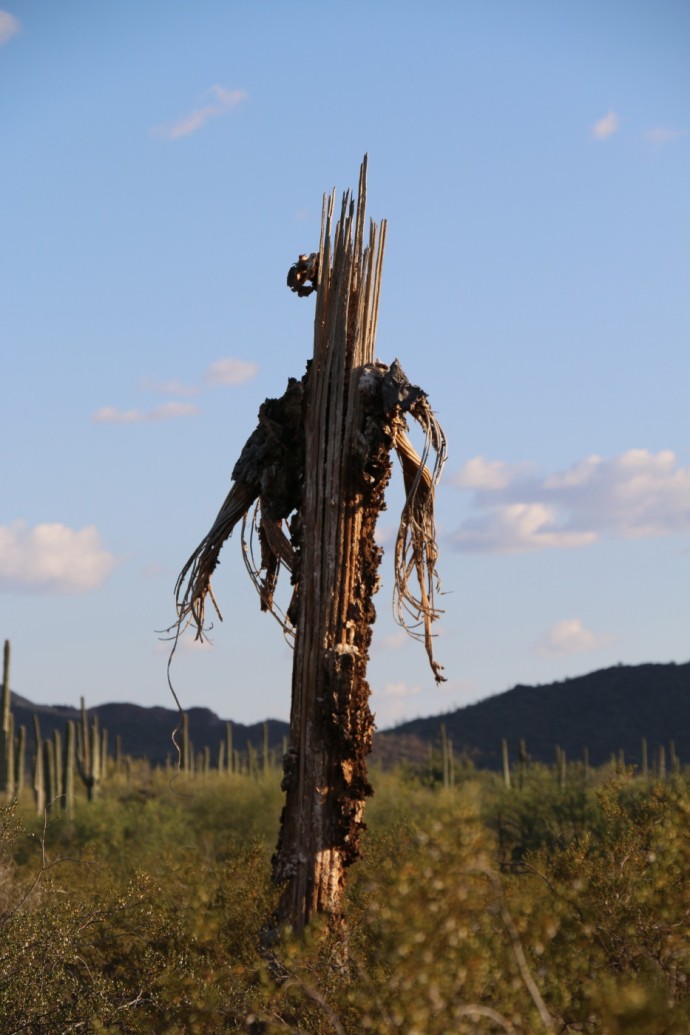 Dead Saguaro or Being

We feast on tamales, chips and salsa. The temperature is in the 90F’s in the afternoon. The RV has air-conditioning, which feels pretty darn good. We have been in the sun hours. There are some gnats about at that time of day that we quip might give us spotted tanlines. We are tired, wanting to relax. A movie is offered. There it is, I hadn’t seen this one somehow and it had been decades since I’d seen any Marx’s Bros film, “Animal Crackers.” I am amazed how talented they were. I just go with the flow. 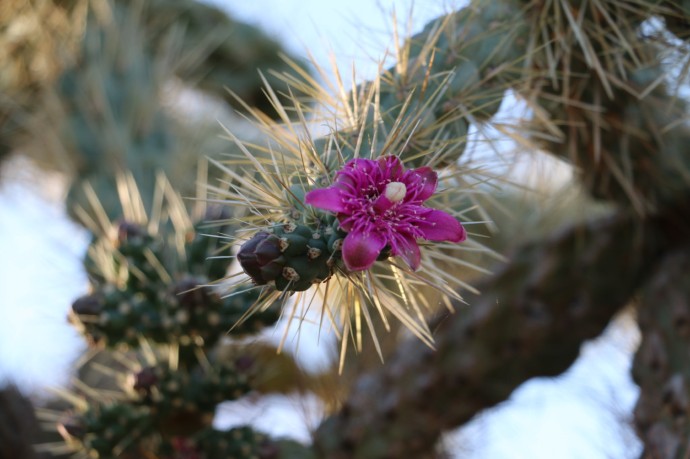 We have to close the shutters, blocking the view to reduce the glare, which shut us in the cozy “boat.” There is that disconnect in an RV. This was new to me to try. It is nice at times, especially when extremes happen. I do prefer a tent when camping, a fire, the temperature changes when nude, but the luxury does also feel good. The wind doesn’t blow messing with the table’s bounty, flies or ants are not around, you don’t have to keep moving out of the sun, or keep an eye on the dog. The sink and water is available, even a shower in the desert.

I didn’t mention the little Bichon Frise that accompanied us. A quiet little fellow, who kept his collar on, curiously staying dressed more than we completely nudes.

We begin to pack out a little at a time. There is an occasional vehicle on the nearby main road, but no one has entered into our domain. The trail leading to us from the road heads in with two cleared spots, and then there is a loop to return. As I get out of the motorhome, I hear a noise behind me.  I am surprised to see anybody, so here I am covered only by a bagged folding chair as a Polaris with two guys in front and a girl in the back pass. They pay no attention in my direction as they pass. Either they don’t have any curiosity for the vehicle, or are respecting privacy. 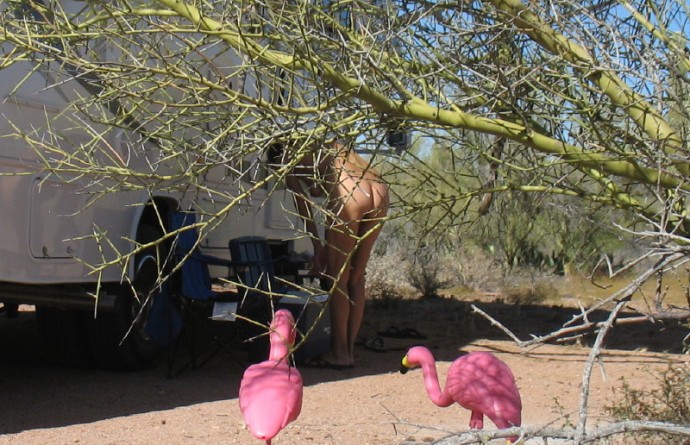 Then, as I am loading up still more, just after having an outdoor shower in the open, a dirt bike blows past, as I climb out of the same door, the only door for miles, while not looking. It is hard to hear these things with the generator running. I wonder how many others might have gone by exploring this little cul-de-sac that were not heard. 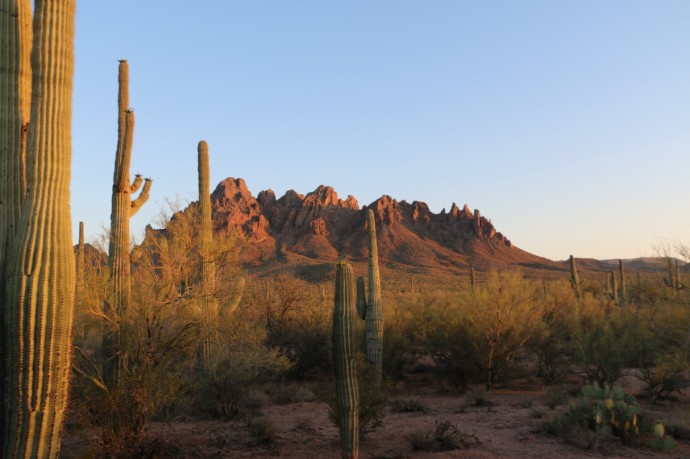 Feeling quite lazy, we pack out, heading home…naked.

Ironwood National Monument was created by President Clinton’s signature at the end of his term. It was a long process of ranchers, mines, naturalist, several government entities, the University of Arizona and all of the various parties with a stake in the area coming to a satisfactory solution. It was created to preserve a treasure. There are just two intact ironwood forest ecosystems left on our planet. We want to share with you the beauty, the awe and the grace of this natural monument. Its status of being protected is in jeopardy. The current federal administration has been ordered by the president to review it and potentially place it on the chopping block. We hope to inspire you to write your congressman, and appropriate administrators, talk and network among those that you know. Your letters and comments do have influence.