Redington Pass During Monsoon: Part I

There have been monsoon floods at Redington Pass the last week. Seventeen people were stranded and had to be airlifted out. A tall wall of water can appear with nothing but the sound like thunder, a roar for a warning. The rains, miles away in the mountains, accumulate as they channel down the mountains. I’ve seen it happen with blue skies overhead.

When it happens, the crevasses either wash out or fill with sand. Huge trees may disappear with all the soil to bedrock in one event. The place changes. One can never know what to expect after rains.

After this, DF and I decided head up to the pass and down into the canyon to see what change there might be. After the floods, after a few days there is a guaranteed flow of water for swimming, or diving and to be fascinated with. 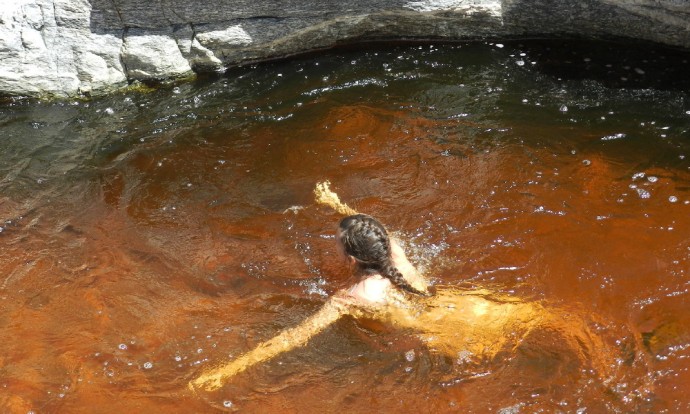 Here are a few photos that we have attempted, to display what a wonderful naturist resource that canyon is, taken during the summer Monsoon season.

Down There is a Canyon

The trail down into the canyon was more foliage thick than I have ever seen it.

This was the second wettest July in history and in only three weeks of time. The first week was still in a very long drought, causing a late monsoon. 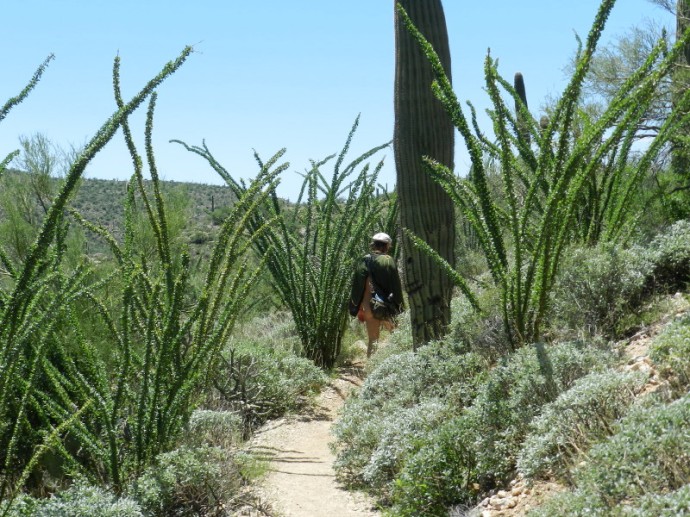 A puffed out saguaro, thick leaves on ocotillos, the brittle bush has recovered from drought.

A green path was held in by numerous varieties of plant species. This verdant channel was peppered with various flowers.

We took so much pleasure in the deep bouquet of scents. As our breathing deepened climbing the hill out of the canyon it was a constant unavoidable pleasure. 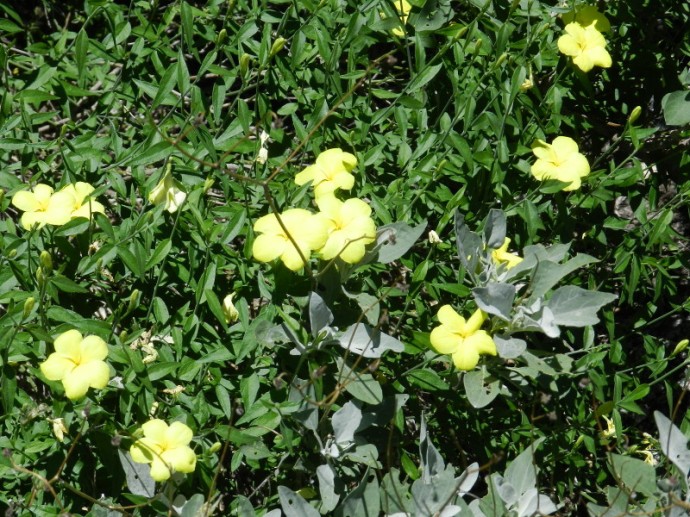 The color of the water was particularly dark. It was more like a dark beer tint, compared to a more usual light beer tint. This tannin from the mountains is safe and harmless. 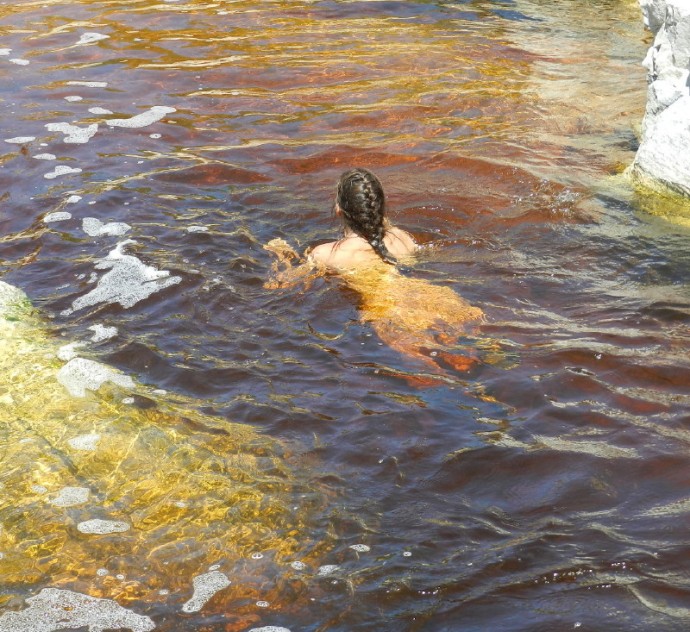 There was more of a fluorescent green algae on the rocks than usual. I’m used to seeing it in the still pools as the flow stops, but this was curiously coating the fast flowing waters on rock faces. I would have thought that the raging brown river would have sandblasted any purchase that algae could make use of. 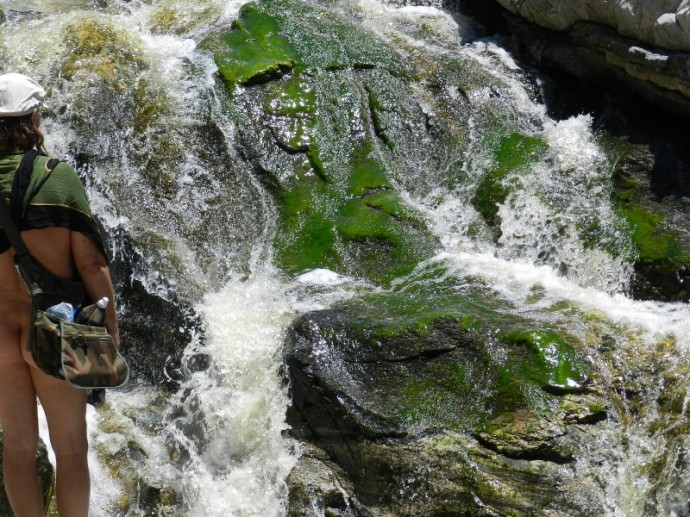 Being summer runoff, the waters were a wonderful temperature. 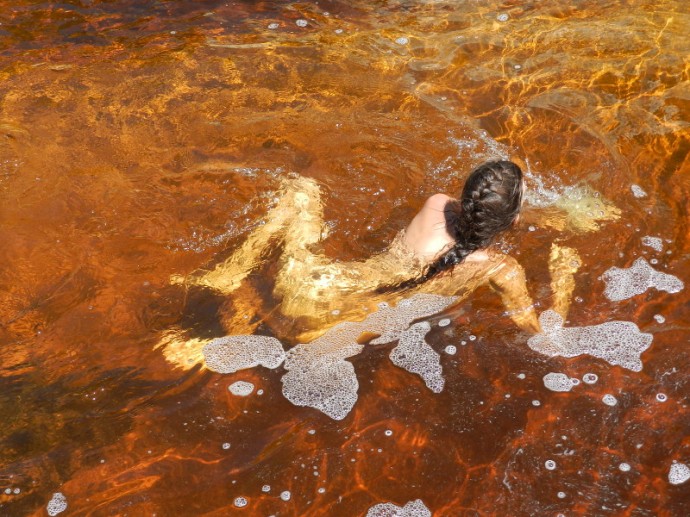 We could slip in and out without any chill, only refreshment.

The term perfect was often repeated, sighs and “ahhh” were heard of ourselves and others.

We have a favorite spot. There is a crevasse that shoots into a waterfall, which has created a bowl big enough to stand in. It is a jaccuzzi. The water swirls, the foam is everywhere, momentary bubbles the size of my head appear and pop. 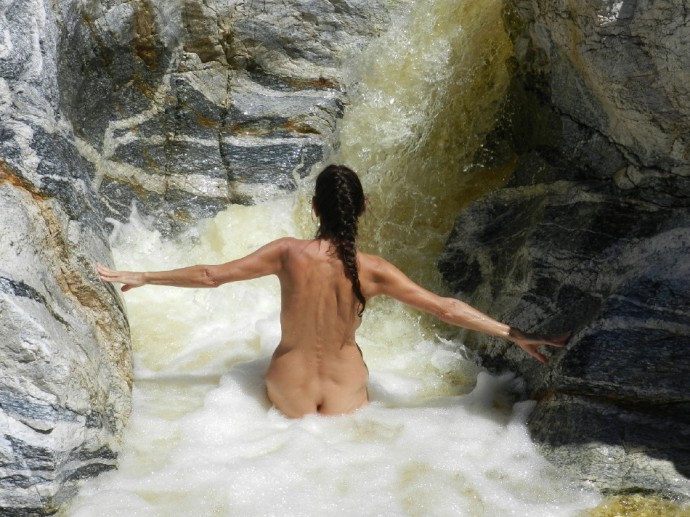 The water always feels warm as it beats down on a back in jet action. The first day, it is just a bit too much water. I manage to slide in and reach behind.

The second day, we can take the pressure and I am able to slide around behind the flow. The water level is changing fast. I notice a difference from the beginning to the end of the second day. Soon it will be perfect, and then gone, until the next rains.

It’s so good, why stop now?

We had to leave early, for granddaughter’s eighth birthday party, but it was so good, that I went back the next day with a friend of ours and spent 8 hours frolicking bare in the paradise.

We sampled each pool of water along the way.

Some are filled with sand this time. Where we once could swim in seven or more feet of water, it is now shallow. 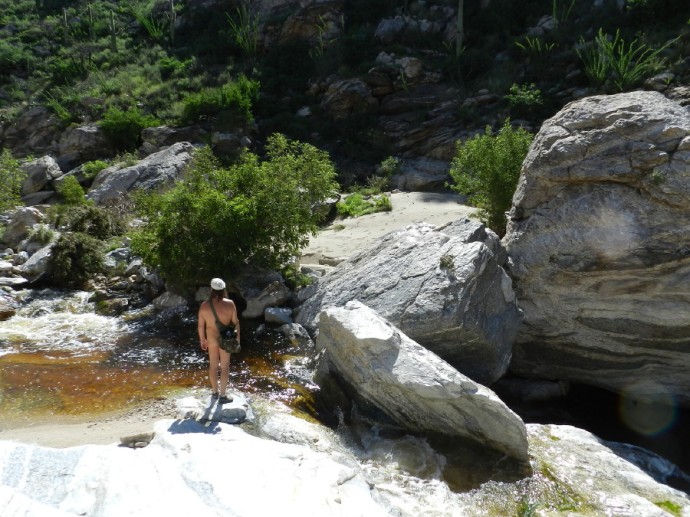 This tree was buried under wild water just days before.

We had to climb, on the generally smooth rocks. The surfaces are uneven. There are chunks of granite in piles, recently washed and many dislodged by the powerful current. Care had to be taken.

Very Slippery with the Current

Eventually, I was relearning how to bend my legs and prepare for possible movement under my feet, adjusting to the circumstance and with the next step already I motion to catch me. It is good for balance. Still, there was constant looking down and deciding which rock looked the most stable. I have found in the past, that a tumble can be very nasty.

The result of this is a difficult, but a fun hike, is different from a path or trail. This mostly barren area makes for many decisions to best traverse and go around the sometimes impossible obstacles.

Through 40 years, I have learned much of the best ways to go, as what has been constant, triggers memory.

Occasionally, a toad is seen. They are camouflaged very well. They hop thirty times their body before us, from rock to rock. Sometimes they don’t. I felt slimmed under my hand. I lift it and a startled critter jumps in flight. 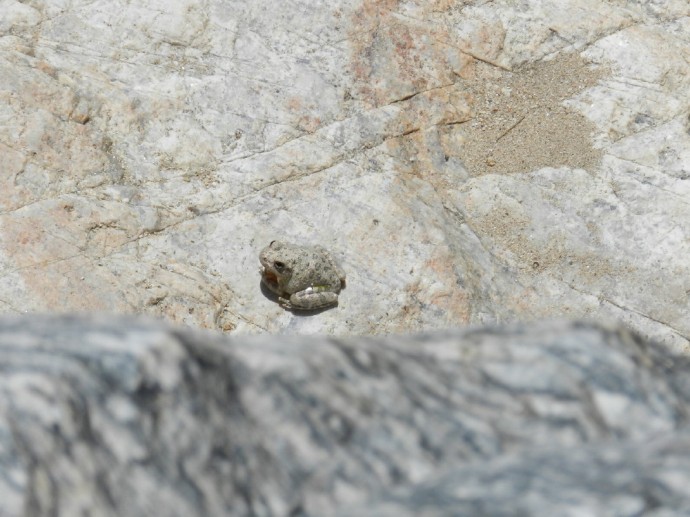 There are many muscles that are not used in a walking trail. The feet are given a true treat. I am constantly reminded in a mindful state, just how intricate and adaptable my collection of bones, muscle, fascia, and flex from my toes to my neck cooperate. The result is a different workout, and a slow progress of distance, as we savor the moment, watching how a body automatically behaves. I had a whole different set of muscles becoming sore. Stopping at each idyllic ponding, we swim and tread water as we savor the visual surroundings.

This swimming, sometimes against potent currents as waterfalls cascade can be used as a workout for others sets of body parts.

We go much further upstream, through a more calm and quieter area.

I want to see the Olympic sized swimming hole. I was curious how the rains change it. Part of the downstream dam of sand is washed away, so there is currently less depth across the pool. There are plenty of deep pockets to swim, however. 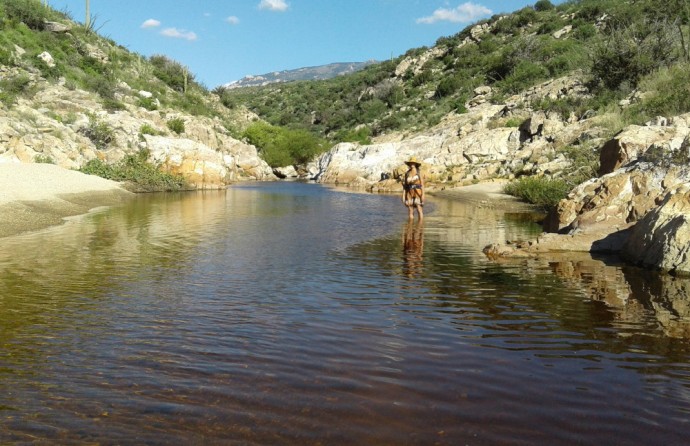 As I approach a large rock to stand on ankle deep in the water as I climb up on it, a turtle scurries away and does a poor job of hiding. There are small harmless snakes in these waters. We see their tracks as we gaze down into the golden depths. On the way back one is in a shallow pool. 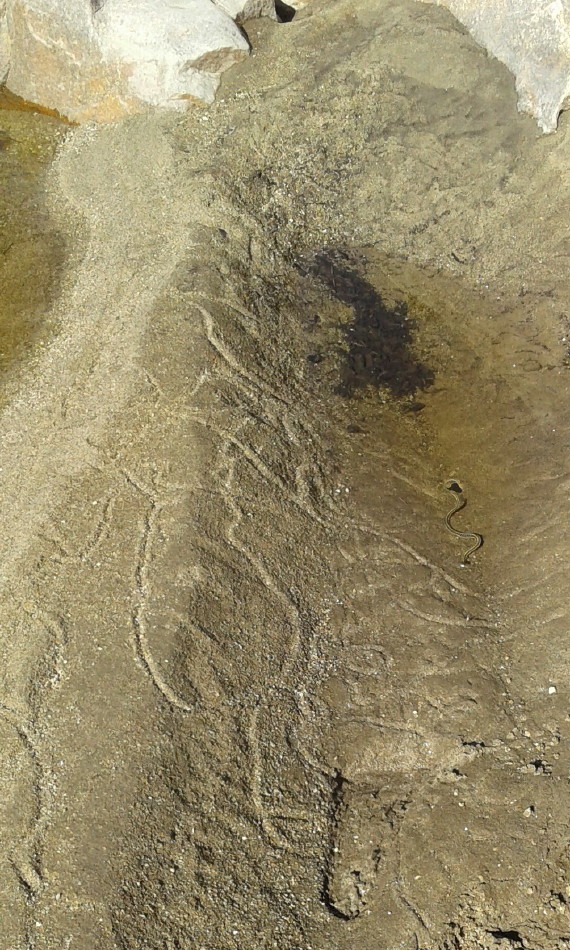 It poses for me.

My friend has taken to soaking her entirety occasionally, chilled in the hot sun by her sundress.

We naturists are under siege from the board members of the “Friends of Redington Pass”, which wish to take away nude use. They arbitrarily have made a decision without any input from the actual users of the nude area. I am organizing to discredit them and work with the Forest Service to preserve nude use. We wish to put up a sign. The Forest Service maps already list the place as “Clothing optional. Any support is needed, financially, letters, and what you may. You can contact me, or the Forest Service. We will have a website up with more information in the future and announce it here. This place is important. It has a tradition of more than fifty years of nude use, not to mention the thousands of years of Native American users before us.

2 thoughts on “Redington Pass During Monsoon: Part I”