With both of us not working on a Tuesday and the weather particularly excellent, I began to look for a new free range naturist adventure in the wilds. I had looked into Cochise Stronghold in the Dragoon Mountains, but then realized that it is at a higher elevation and colder. What is the sense in having excellent weather for naked and then going someplace cold? I had read about a mountainous area near Florence Arizona on a 4×4 club website. When a friend told me that it is some of his favorite 4×4 places, I decided to research. Its elevation is close to that of Tucson and the temperatures are similar. I inquired with another friend, a rock hound, and was told enthusiastically about the delights there. We could get back in there and probably find some good hiking.

It was another beautiful day again. We were still a bit tired from the weekend and then the day before on Patagonia Lake. I had to stay dressed to get gas and drinking water, but could barely wait to get my pants off and move comfortably down the scenic road to Florence, Arizona. This highway gives me memories through the years, triggered by the familiar sights.

We came to the turn off, discovering that much of it was now paved. It did eventually turn to dirt and I found a place where I could safely get out naked and turn the locking hubs to get into four wheel drive. 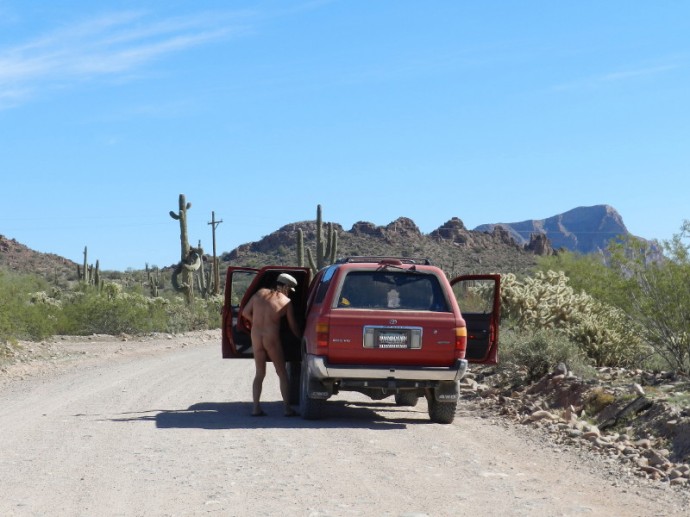 The road went out about ten miles, when we saw a sign for Box Canyon LLC. Thinking that that was it, we turned in to find no trespassing signs and a large gravel pit. I couldn’t imagine someone closing off the entrance to an entire mountain range.

We continued further and I was relieved to see that the road lead to a BLM managed gateway, complete with a good off road map of the area. 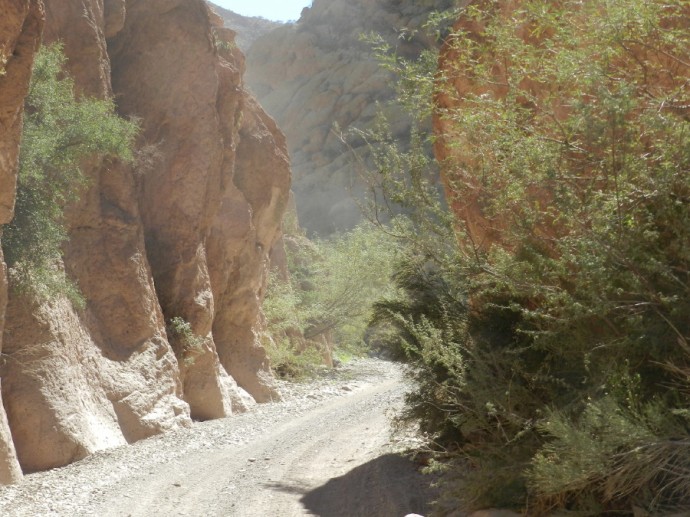 The place was just beautiful. 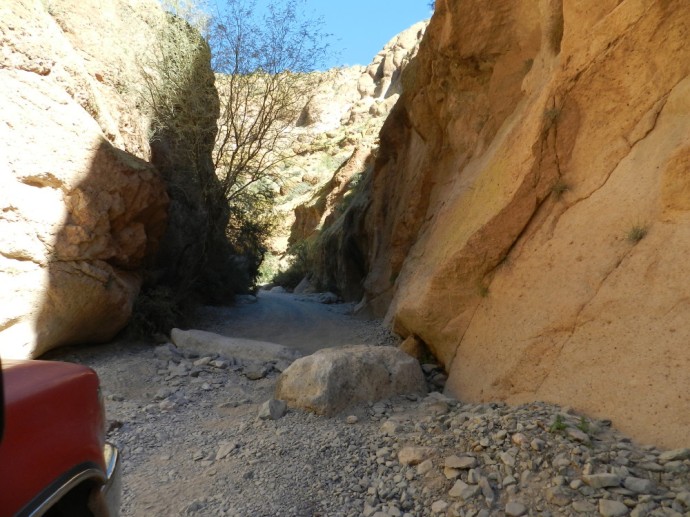 The vegetation was ironwood diverse desert, my favorite kind. 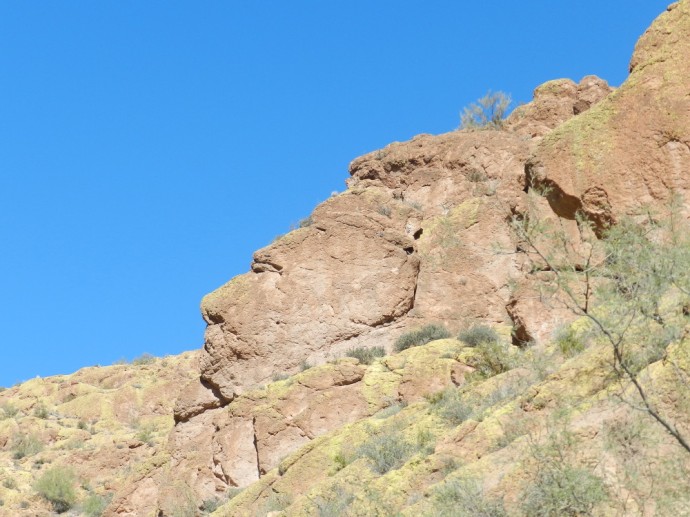 Native American Features in the Face

The vistas were rugged with many colors in the rocks. 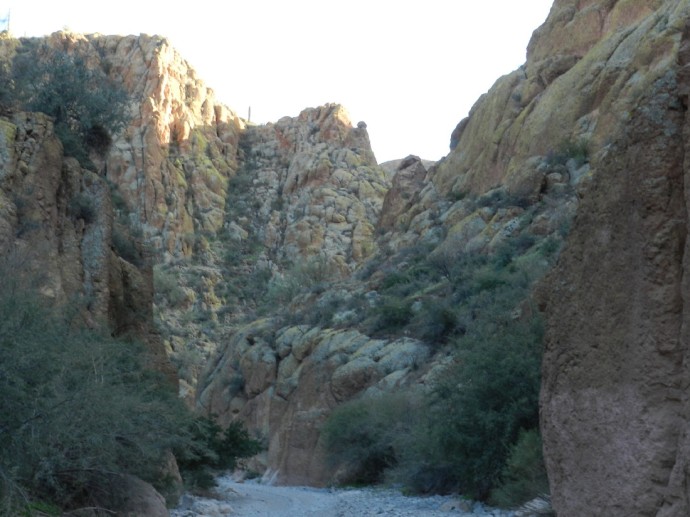 At the beginning we discovered a group of retirement aged men on quads looking up to the side of a nearby cliff. We found out later that they were looking at three bighorn sheep, looking down on them. We didn’t want get close to them while undressed and wanted to make as much distance as we could from them, so we could have our privacy, nude. 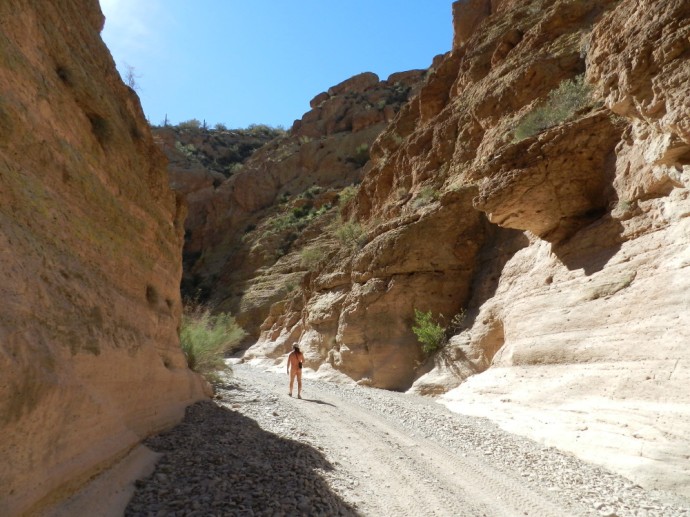 This was one time that being nude and avoidance cost us a special treat. Spotting Bighorn Sheep is rare.

This Canyon runs along about 2 miles with steep walls 100 and then more feet high. 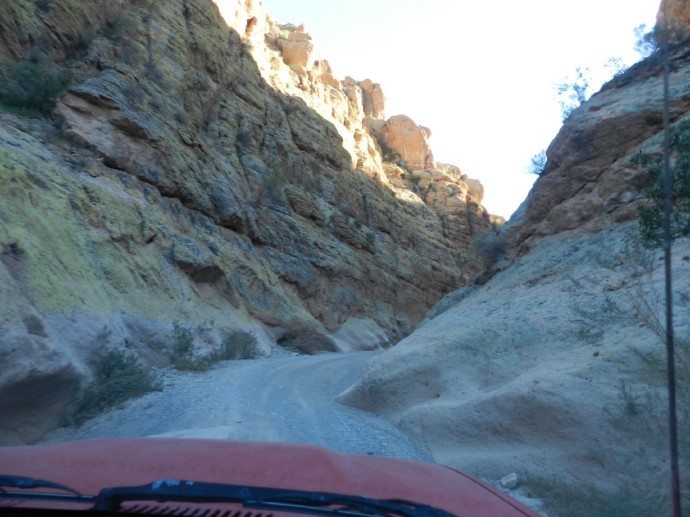 The gorge is just enough for a full sized truck to get through, in many places with just inches on each side. 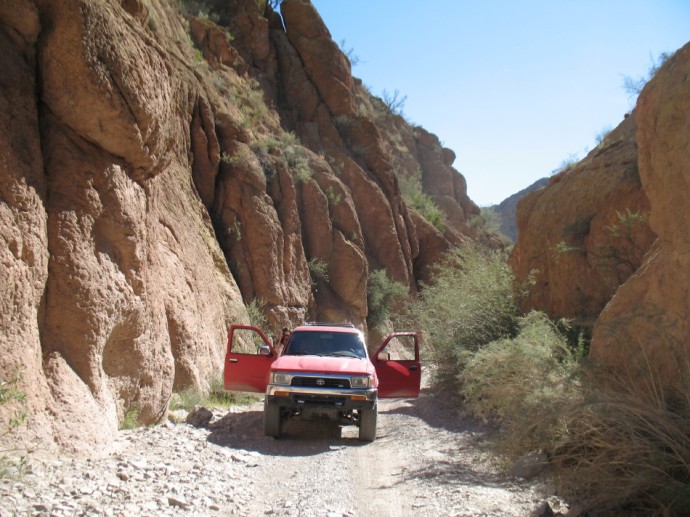 It felt tight in my 4runner. We came to a rough spot. 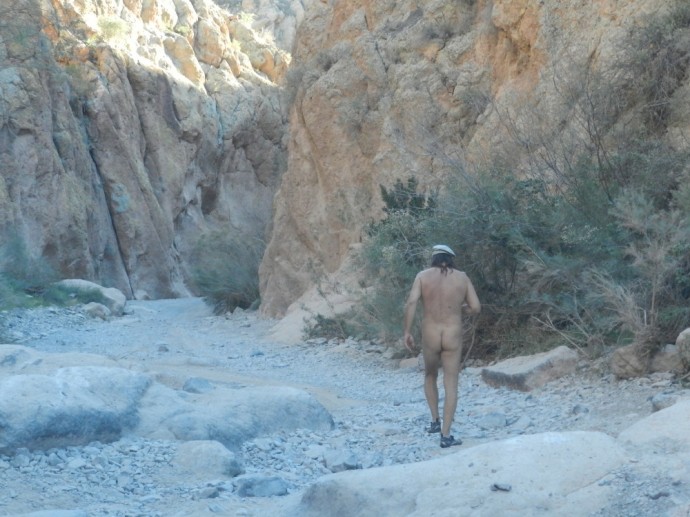 Out Inspecting a Rough Spot

I got out to inspect and to plan the route over these rocks. 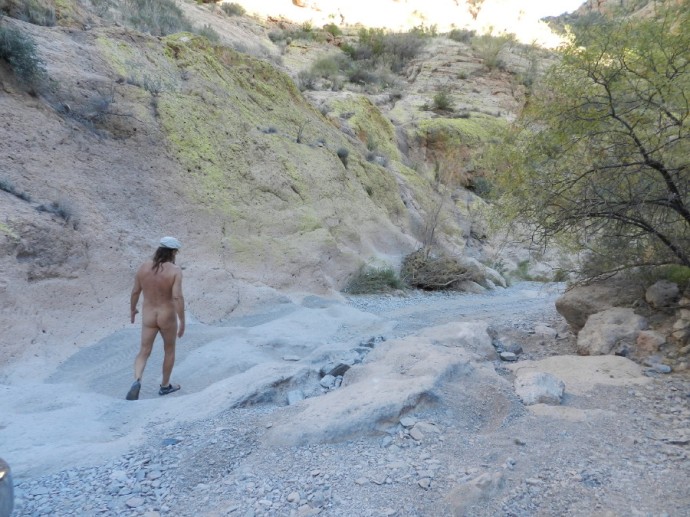 Caution is needed so as to not to wreck the truck and I needed to take some air out of the tires. 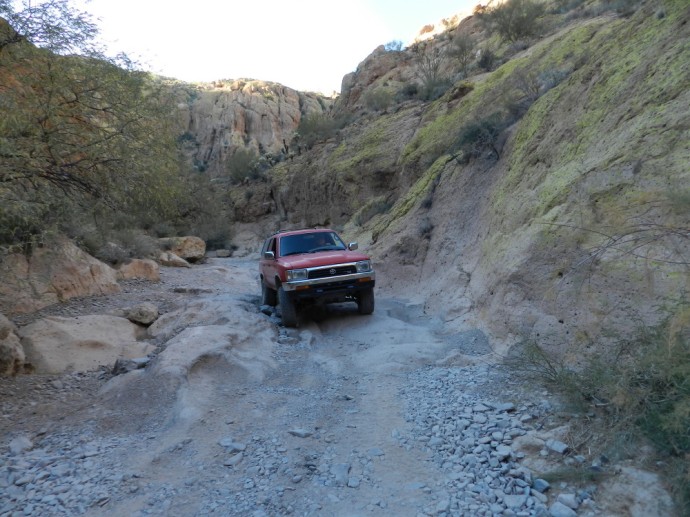 I heard motor vehicle noise and decided to put on a pair of shorts for the inevitable encounter. We asked about conditions further ahead as these travelers passed. They said that there would be a couple of rough spots more. I felt at no great risk continuing alone without a backup truck. 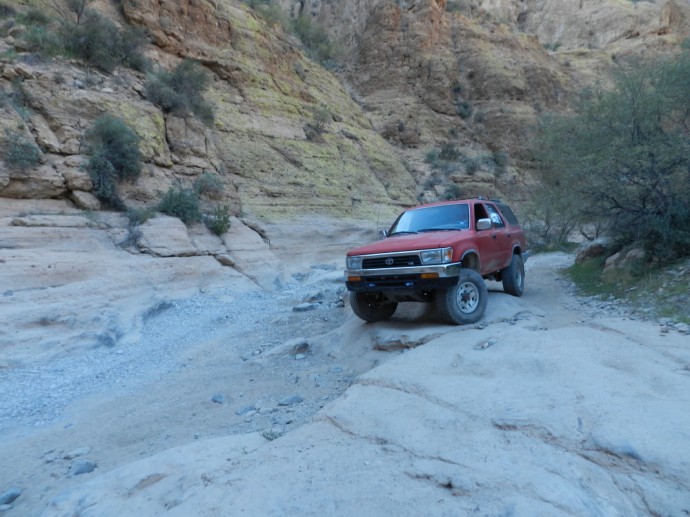 Another drop off to Negotiate

Besides there seemed to be a lot of traffic here even on a Tuesday. The boxed-in canyon would spread out in a half mile into numerous side trails, I was told.

We took a lesser tributary route off of the main drag for a while, then found a place to park. I suspected that if we climbed a steep hill on foot that we would be able to see the local terrain that was hidden from view and find a place to hike. After climbing we found another trail on the top of the ridge. 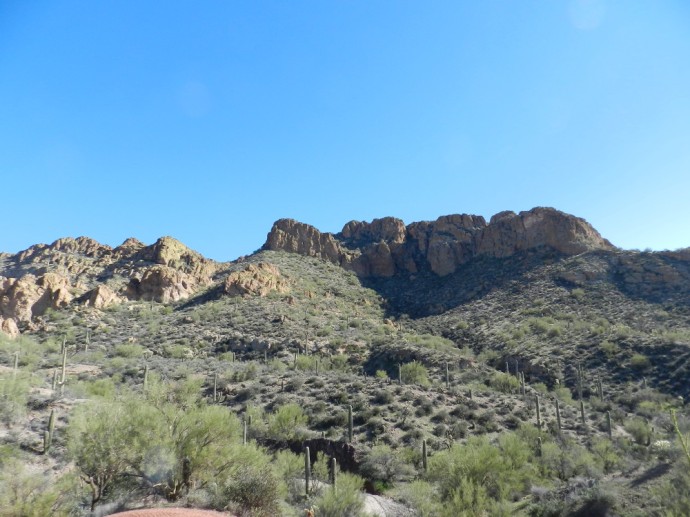 View at Top of the Ridge

It lead to a site where people race up a steep grade in their vehicles and motorbikes. There was a cross placed at the base where someone had wiped-out and died. 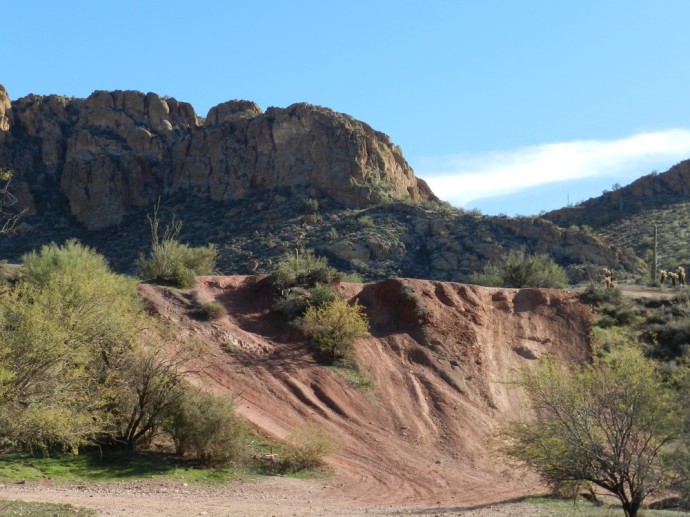 We found a wash and decided to explore it and look for rocks. There are numerous mines in these mountains, one is called Mineral Mountain. 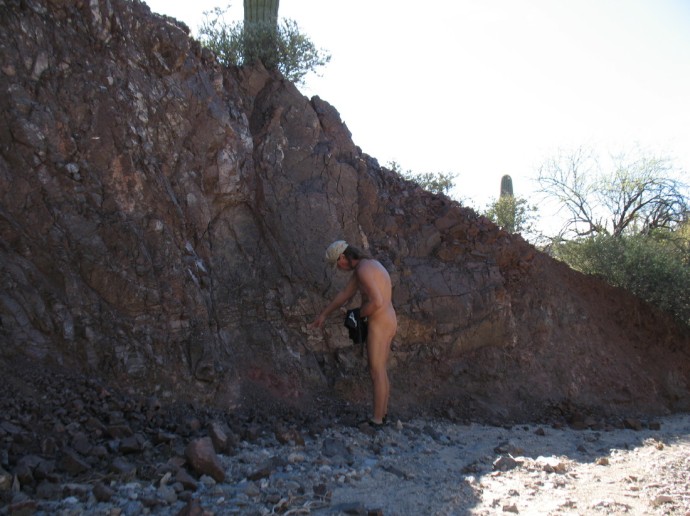 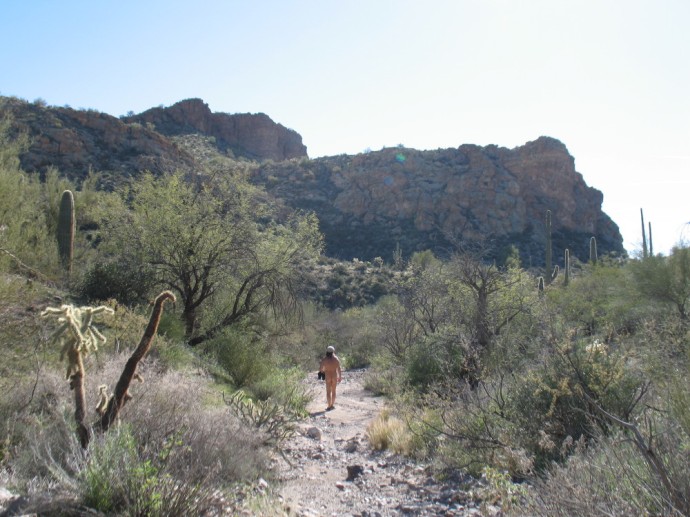 Rather than climb back down that slippery slope, we found a way to get back, by way of the route that we had been driving on. We had seen only two Polaris vehicles. DF told me that if someone came, she had no clothes with her. She said that I had that pair of shorts in hand and that I should put them in front of me and she would then stand in back of me. We walked back to the truck and then drove it to a place that we had passed for lunch.

Upon parking, so as to block some view of passersby in amongst some mesquite trees, by a wash, we set up two chairs with our backs to the road and made a fine lunch. 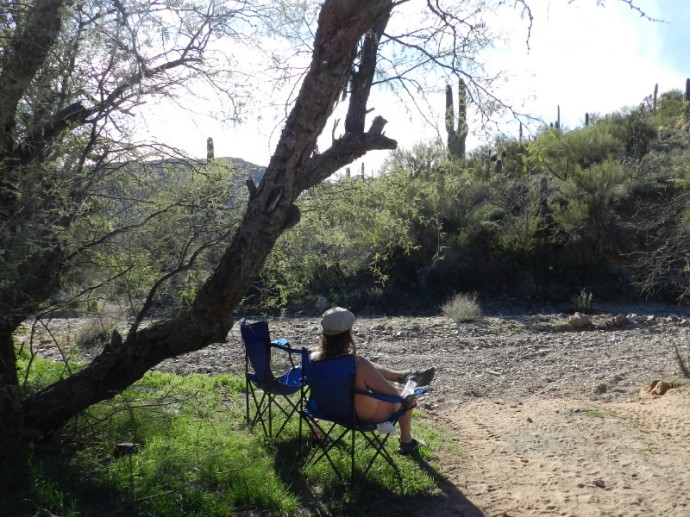 There was always a chance of someone coming down the wash in front of us and we did turn the chairs the other way for the superior view for a while. 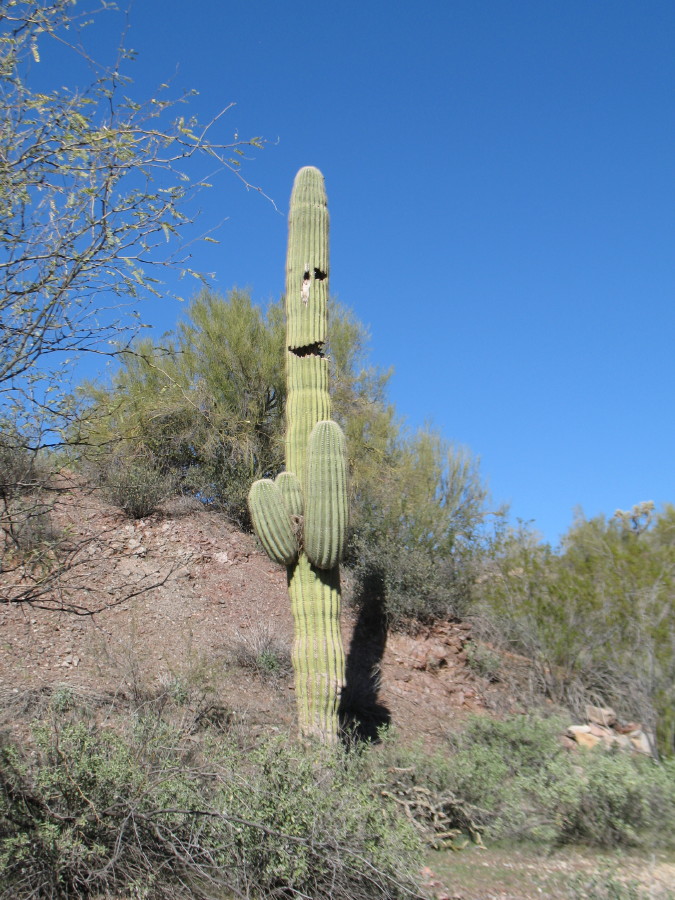 We listened and watched two ravens glide high above around the canyon walls. We listened to the silence. Only three other rides came by in the hour or more that we were there. 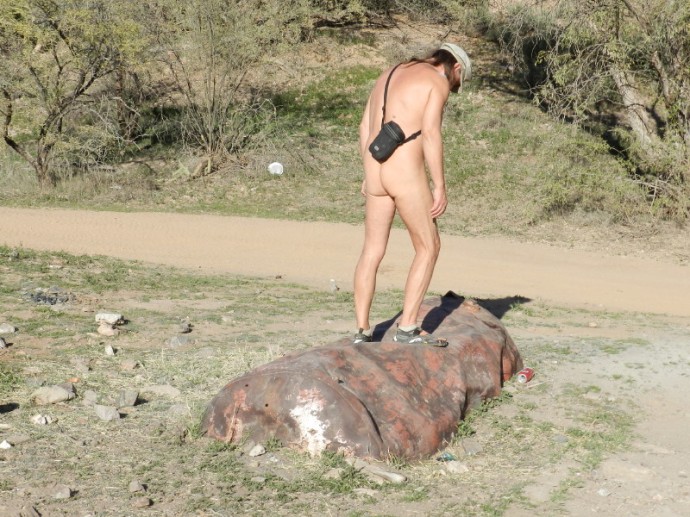 We wandered around unfettered because we found that we could hear all of the vehicles coming in plenty of time.

We decided to walk up the wash and explore a smaller wash coming down the hillside. 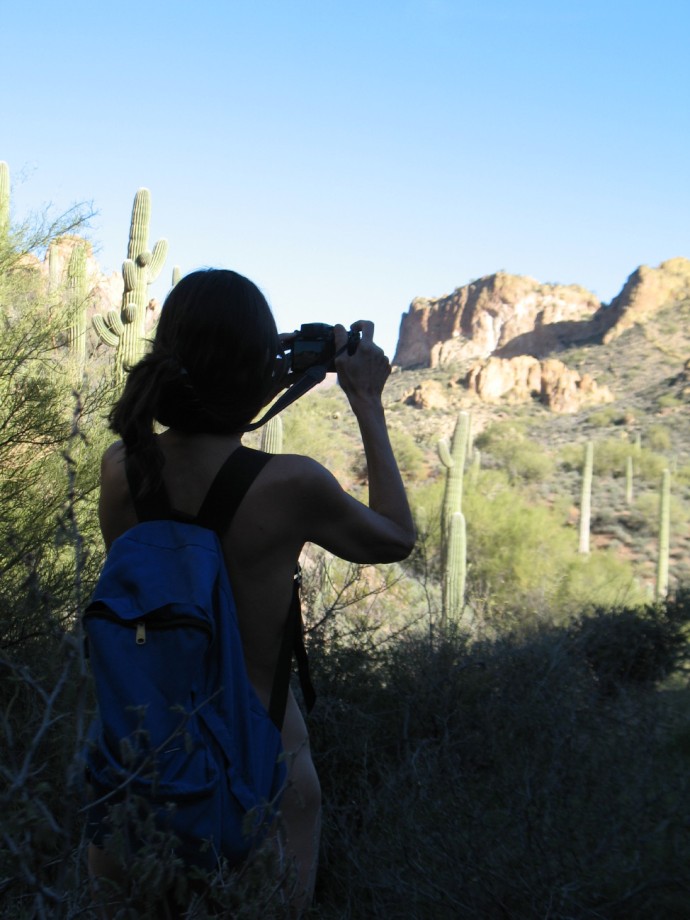 There was a carpet of grass and it looked inviting enough. It was pristine. We found our voices dropping to a whisper for some reason, as we carefully placed each footprint around the vegetation. 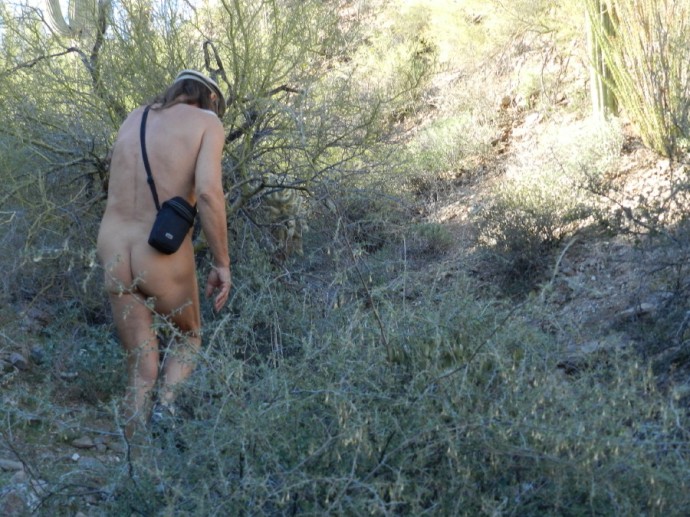 Dang if I didn’t find a couple of mineral rock specimens. 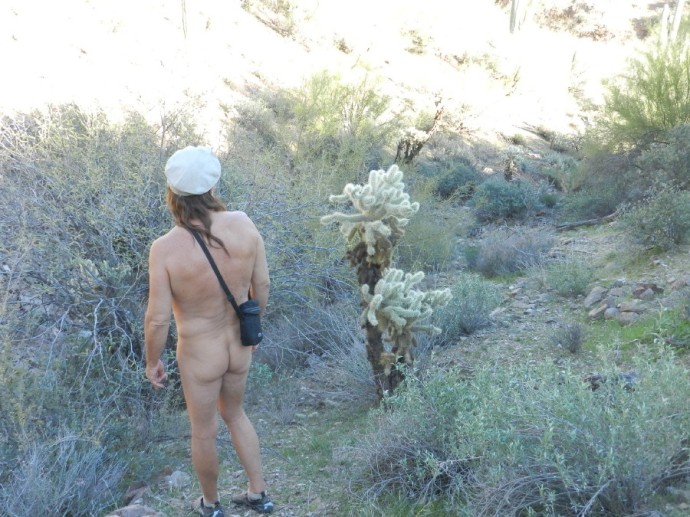 I have seen these for sale at the Tucson Gem and Mineral d show. I’m going to figure out what it is again. I’ve forgotten. The place was peaceful and wondrous. 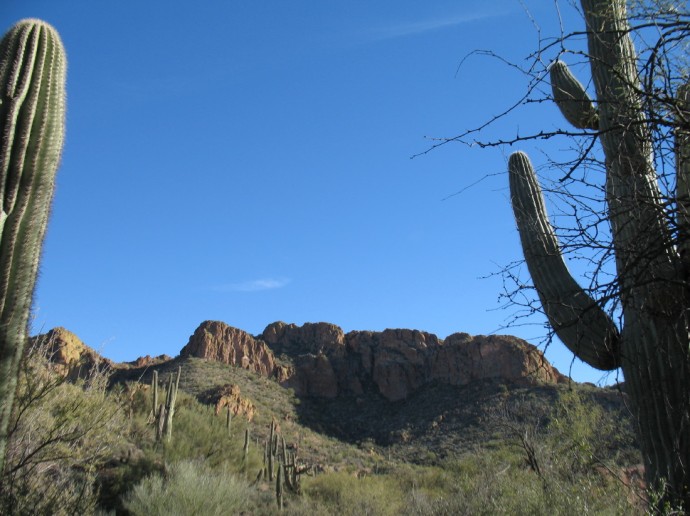 We needed to get out before sunset. We took all the time we could, stopping to take pictures and go through the same driving obstacles as before. This time, it was backwards and downhill. We figured that most people had left and we needed few precautions to remain nude, other than listening. It took us 40 minutes to drive two miles. Its quality, not quantity, right? 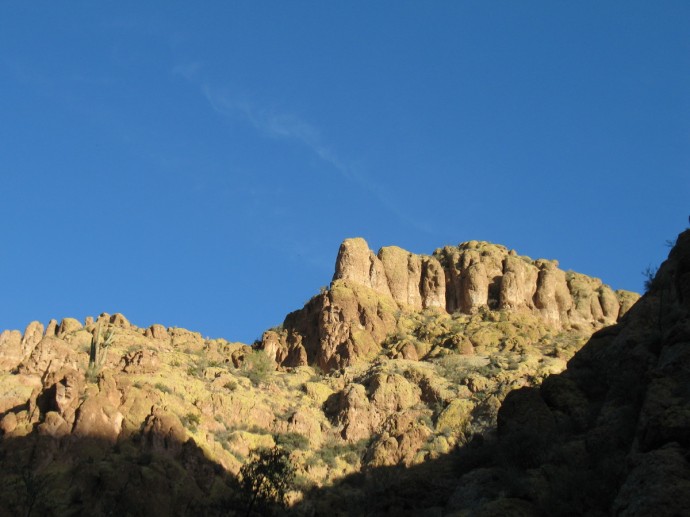 We stopped and walked free-range, no backup, as the sun began to set. There is much to see and explore in those mountains and we will be back, but most likely not on a weekend. We didn’t find a long hike in solitude for exercise, but had a fascinating time well spent. 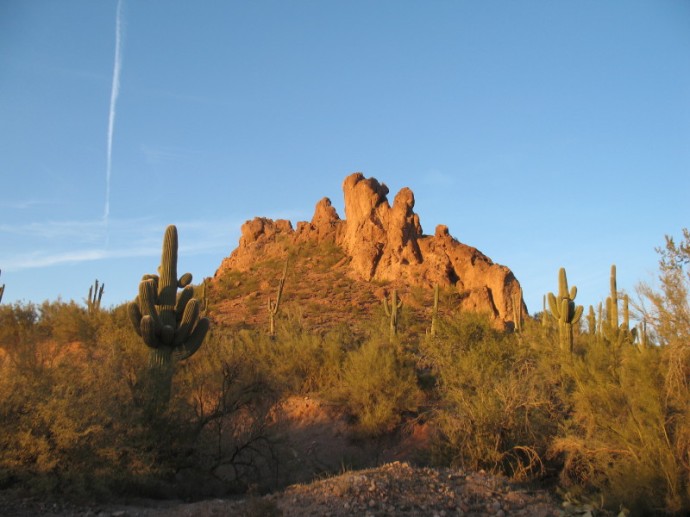 We took soo many photos. 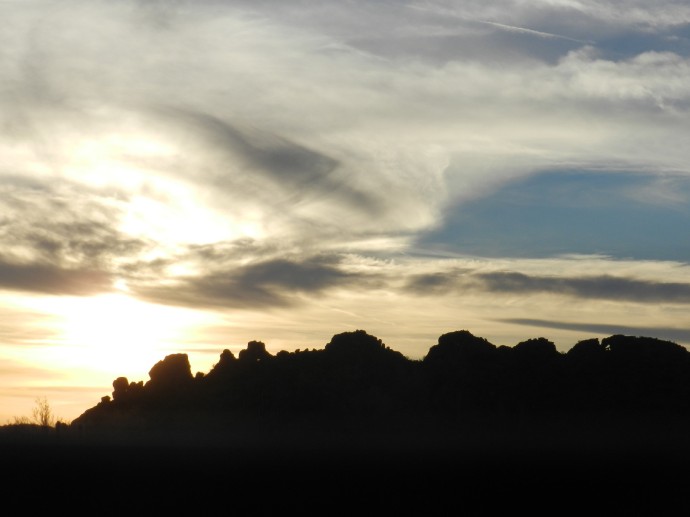