Monday, we are beginning a weeklong tour in Arizona. We have reservations to stay in a Buddhist retreat building at the hot mineral baths of the Casa Blanca Hotsprings, in Tonopah. We carnude up the back way, missing most of the Phoenix sprawl. This is west of Phoenix. There is a truck stop, the Little Feet song “Willin’” mentions this place. The sound of the heavy diesel trucks and the Interstate Highway 10 is heard much of the time. There is a restaurant on the corner, and not much else, unless you have a flat tire. But down the street is a mass of reeds and bamboo, in a little oasis, and it feels like an oasis. This is actually camel country from days gone by.

Tonopah actually is a native word meaning hot water under a bush. There is a hot spring with accommodations next door. The current owners of this place had just sold that. That is still in operation, today in 2017.

The room has a handy kitchenette and toilet. It is decorated with Tibetan Tonkas, a futon and has an alter for whatever purpose that we might need it. We have imported with us hand-drums, a guitar, a Jack Kornfield Buddhist psychology book, and our personal alter paraphernalia for a spiritual retreat.

The grounds are fully clothing optional. After we drive up carnuding from Tucson, we get out naked and are greeted by our host, who also sports an allover tan. Soon after, his wife arrives back from shopping in town. We begin unpacking while she gets suitably undressed to meet us and show us around. We feel very welcome. There are some nice things done with rocks among the mesquite, including a labyrinth.

There are two stand up clawfoot tubs placed together and a private tub for us to soak in that is close to the retreat cabin.

After settling in, we go straight to our private soaking tub. It is a heart shaped thing that looks out through a western barbed wire cattle fence into a creosote field to the west. There are shady mesquite trees to the south and east and a wooden privacy fence to the north. IMMEDIATELY, the water begins to have its effect.  It is just a great temperature and before we know it, we are both wiped out by it in complete relaxation. It has a wonderful effect on the skin, too. 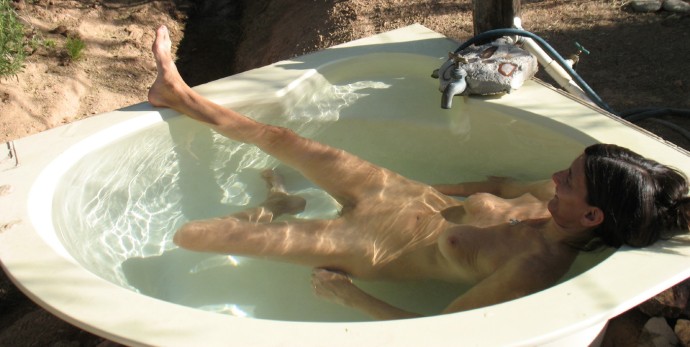 After soaking awhile, we decide to get out, eat, then get back in for the sunset. Next that thing that we know, we are laughing and watching the sky darken. We just couldn’t get it together to do more than add more hot water. We have spent hours in here. We crawl out just in time to watch the full moon rise huge and orange.

We do eat, finally. Then, we get back in the tub to sit and enjoy the full moon’s light show for hours, more. Eventually, we crawl out and lay down to sleep for eleven straight hours. Dang! That water is magic.

Tuesday, we get a late start, but discover nearly record low temperatures and wind. It is in the seventies instead of the usual 90F to over 100F. We are lucking out.

We drive about 25 miles to find some petroglyphs and a short hike. No clothes, but we do leave a stash in the back seat in case we find something public, like an intriguing restaurant. There is no restaurant. It is a two lane back road through a few irrigation farms and rather stark desert. It passes next to the creepy Verde Nuclear power plant complex. Does that thing leak? Is there residue along here. Probably not, but we just don’t have it in us to trust it, or feel good about it. “The China Syndrome” movie just won’t go away.

We have a rough map, a hand drawn set of directions really, which are to lead us to ancient petroglyphs. We arrive in a very secluded spot that looks up to a butte-like ridge, which is not far in the distance. The car won’t go any further, as the road, or jeep trail, gets rougher from here. There is also some mud. We are in a flood plain near the river.

We begin up a trail, when suddenly, we are surprised to see some workers in a field doing something, here in the middle of nowhere! We have to turn back, being that we are naked, but soon realize that we have been going the wrong way, anyhow. 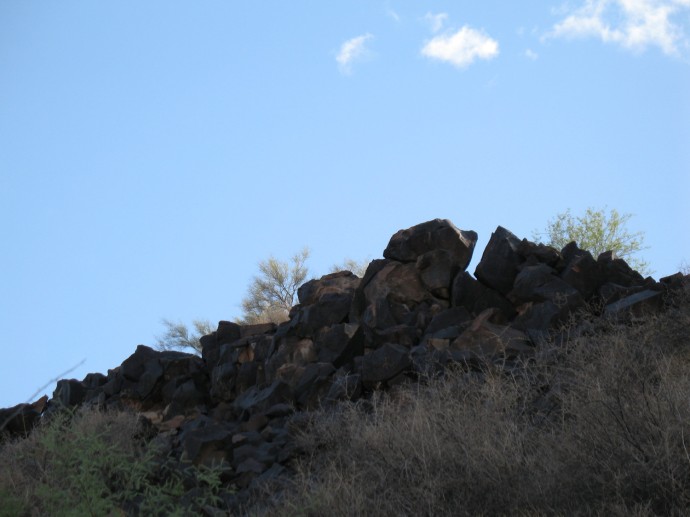 We again continue up to the top of the mesa. We then climb back down, because of poor access to the carvings.

Back at the bottom, we head to the top of the falling rock cliff, climbing over the boulder sized pile of rocks that make up the slope.

Before us, we discover a multitude of prehistoric rock carvings.

They are like graffiti, etched into the black covered stones. We are impressed that there are so many! 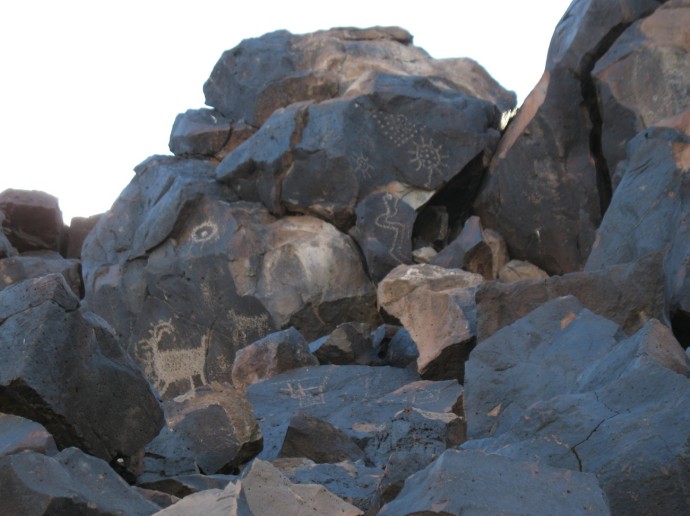 There is a bridge off in the distance, which is to be our the next stop. We would like to visit the dam on the other side, too. 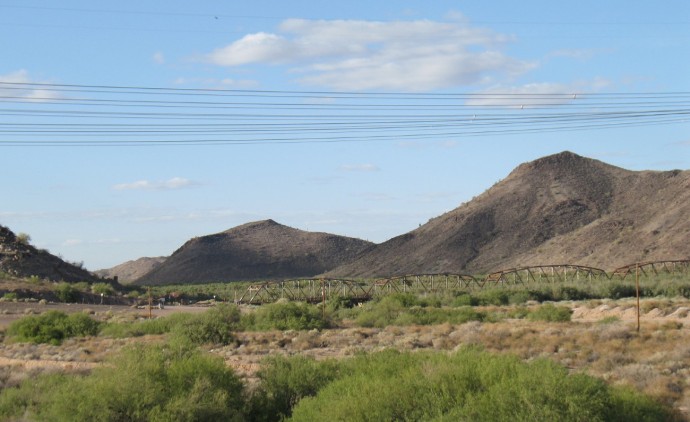 The bridge is a long and unusually narrow one. It has considerable rusting, even in our “Arid-zona.” It was a part of the infrastructure projects from the Great Depression era. There is no money being put into it these days. It does have its character. 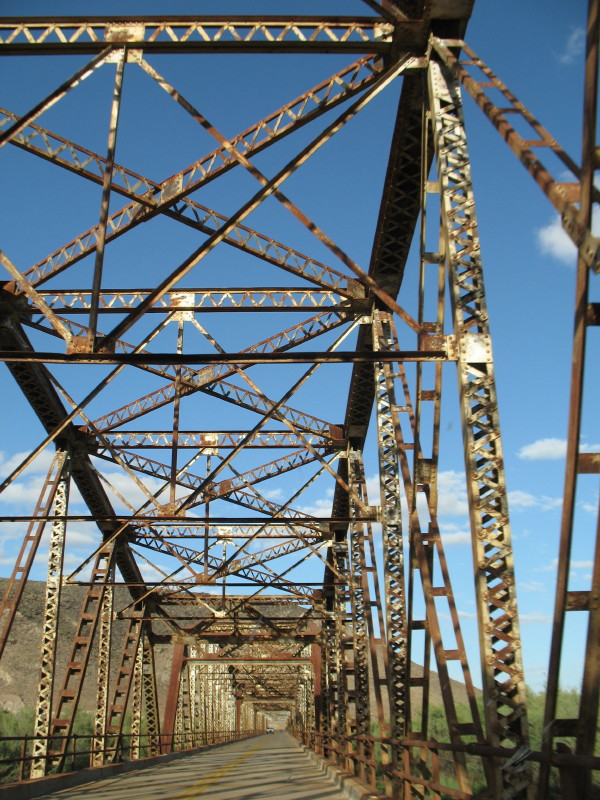 I get out to give it a look and take a picture with one of us in it. The sign reads, “No Loitering on the Bridge.” I don’t intend to stick around for very long. Well, I’m naked, there’s a hill behind me to the west where a car could pop out at any time. It is unlikely here. This is not a busy place. This is quiet and little used.

I approach the bridge, a wrap in hand. Sure enough Murphy’s Law, a pickup truck pops over the hill as I scramble to cover up.

It passes but loitering on the skinny bridge would be a bad idea anyway, even with clothes on.

We continue, driving across that bridge to experience it and to see what is on the other side. To the north, there are remains of an old concrete dam. There is a good amount of water. A family is fishing. We stop, get out using the car and some bushes for cover and snap some shots. 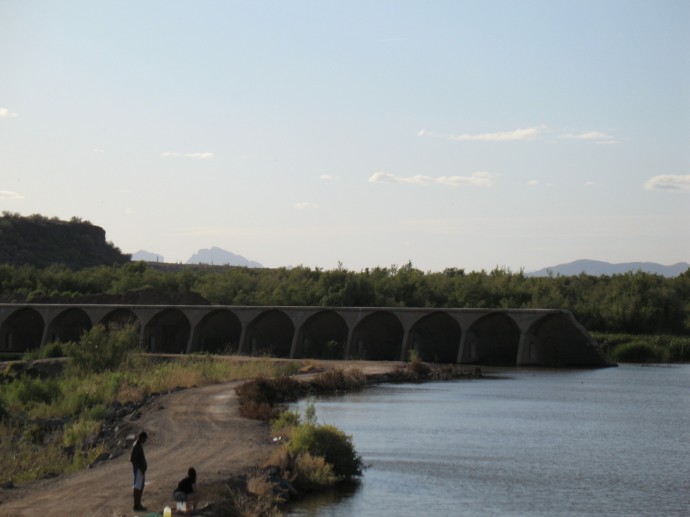 The shadows are getting longer. We drive back through the countryside, which is littered with power generating plants and tall wires going to distant communities, including that creepy nuclear power plant. The Ironwoods are blooming and once again, with that, it seems that our timing is perfect, with a full moon around sundown, and totally unusual cooler more pleasant temperatures to boot.

Getting back, we melt into the hot tub and I DO mean melt. We are faded into an altered state for an extended time, once again.

Next week: The rest of the trip

Into the bloomin’ IronWoods and on to Prescott

One thought on “Tonopah: A Trip Report”