DF had taken Wednesday off to celebrate Fat Tuesday later. We want another beautiful day hiking. I had been curious to see what was on upstream past our more usual Redington Pass haunts for quite a while. I had checked the trail and topo maps. I had studied the google satellite images. I had been on my way there when I fell and messed up my leg months ago. This was going to be a fine mid-70’s F day with a little breeze.

We arrived about 9:30am, so the air was warming up well. I decided to go with no back up clothing. I wanted to feel the just liberation. I enjoy the lack of something to carry. I wanted to feel like I had thrown myself into nature shedding the unnatural impositions of man’s law. This was mid-week and there was only one more car parked there. I took off the shirt that I was wearing and placed it in the 4runner. DF wore her standard short sundress to disrobe just down the trail, She was not feeling interested in my plan to lighten the cumbersome clothing requirement. 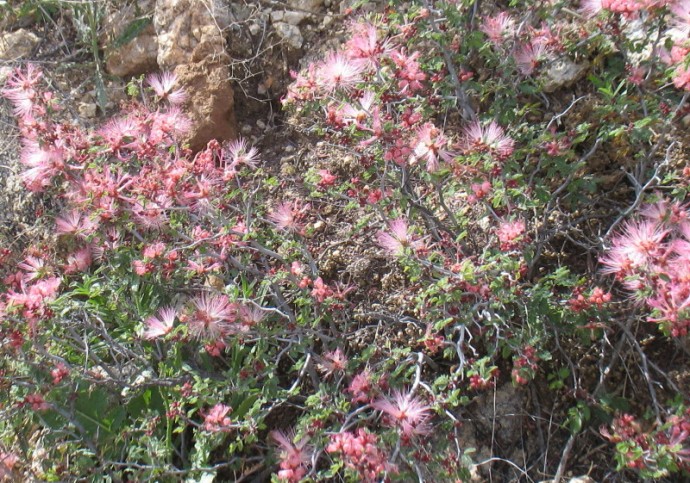 We started off across the road and down the trail, looking back across the valley to the Tucson Mountains in the west. 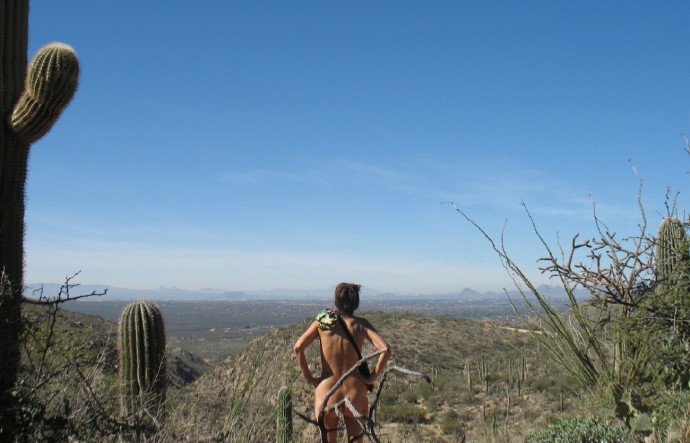 It was soon that we began to hear the roar of the waterfalls down below. From above, we assessed the amount of flow and it appeared nearly perfect for our passage. We then took a high trail over a hill to bypass our usual climb through the canyon boulders. There would be plenty of that later. The mission was to go where we had not been in years and then even beyond that to explore.

We continued through the delightful granite formations of the canyon floor. The water was from winter rain and snowmelt and as that promises, cold. Because of this, we were careful not to step in and get our feet wet.

We came across a well-tanned older man sitting on a rock, waved and left him to his peace. Not much further upstream, we found a flat surface partially still in shade and partially gathering sun. DF wanted a break. She had been ill the week before and was weak. The moment that I sat down on the rock, I regretted my decision to leave all my clothing behind. DF did generously share a piece of her dress to sit upon. I held her from behind, my head on her shoulder as we sat and gazed up the canyon at the rock formations and walls. The stream passed us by. I told her about a dream that I had had as I awoke that morning, which was about us. We were feeling magic.

Continuing on around the bend things had changed. The dam that I had laid on and sunned, years before, was missing a long section. This was a thick concrete dam that had been there for decades. The last big flash flood had washed it away without an apparent trace. Further observation showed us that the large old cottonwood tree that had debris ten feet high at its trunk from another flood was also gone. The sandy area was now a large pile of boulders and bedrock. Everything was washed away. Instead of a beach, there was a wonderful deep swimming hole with a rock bottom. 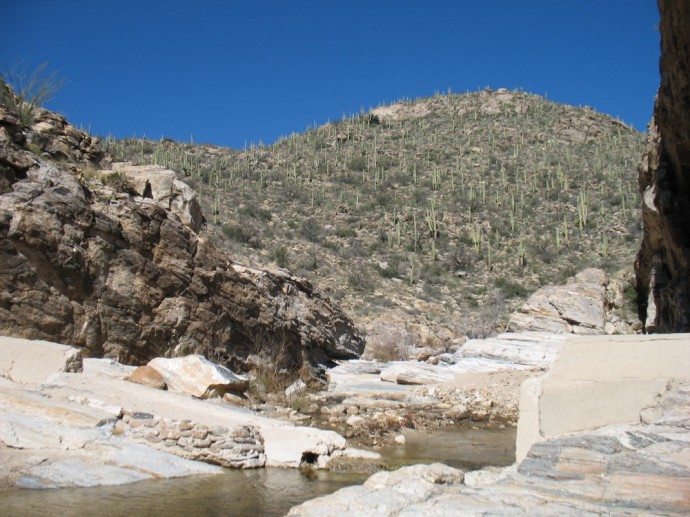 Remnants of the Dam and Where Once Stood a Tree

About this time, we encountered a friendly nude man with a walking stick coming downstream. He told us that he had come down another poorly marked trail from the road that he called the blue rock trail. He told us of landmarks to explain where it was and where it came out. I was curious about this, a quicker way to get back there. Again, I questioned my decision to leave my wrap and going with no backup. Even if we wanted to explore this option, I would have ended uphill from where we were parked and would have to walk nude down the road. This left me with one option less and less flexibility.

Passing many fine swimming holes, we finally came to where the canyon walls disappeared, the creek got wide and flowed slower.

This was where the road was supposed to be. The goal had been that from this point, we could go either way. We found jeep tire tracks through the waters and where someone had parked, but no road. We decided to go upstream more, thinking that the road would be there, and that this was probably just an offshoot. 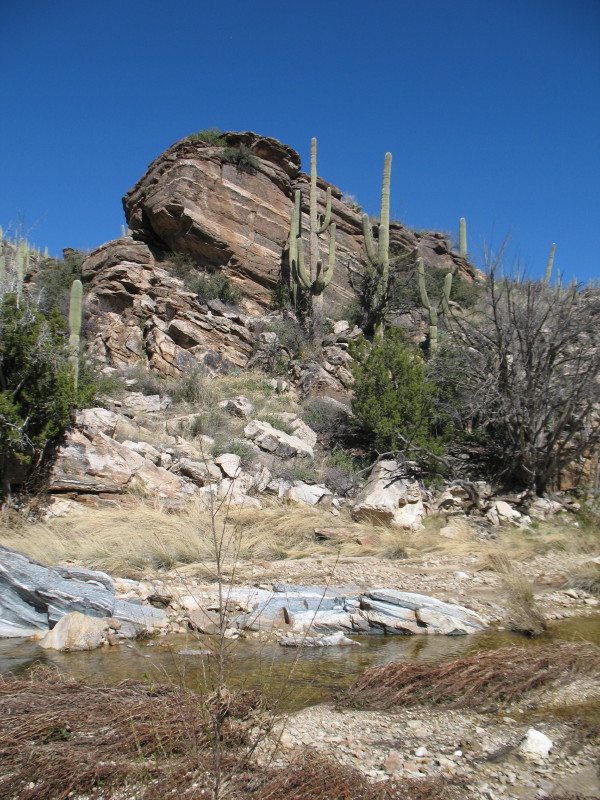 We boulder hopped until we found a spot to get across dry. From there we discovered a very good surprise, not the road, but a beautiful spot of grass and white bark cottonwoods, a great destination.

We were drawn to a nice green spot with some shade and sat down to have lunch. Again I had to share a piece of DF’s small dress and knew that my wrap around would have been comfortable to have. I sat down, but the short piece left me open and had my balls startled by poking weeds in the grass where I wasn’t on the material. I readjusted.

Sitting Down to Lunch

We sat and enjoyed the view as we tried my latest experiment in dehydrated backpacking food. Refried beans and apple slices. It was good. It rehydrated instantly. We had good soft organic almonds and fresh baby carrots, and a cliff bar desert. All very pleasant.

We were surprised that we had taken over two hours to arrive here, only but a mile and a half distance, I very roughly figure. We had been at a causal pace, but this does testify to the slow going on an unfamiliar trail-less terrain, climbing, meandering, backtracking, considering options, and being careful, stepping from one new boulder to another.

There is a tendency for a body in motion to do multiply steps in series before one has given thought to them. Rather than just trust that a rock will be stable, or momentum will bring one to a safe step instead of on a cactus or sharp something, there needs to be intervention of the trust. Sometimes a spontaneous series of steps will save a fall. Just sayin’, that it all had to be very mindful and aware. 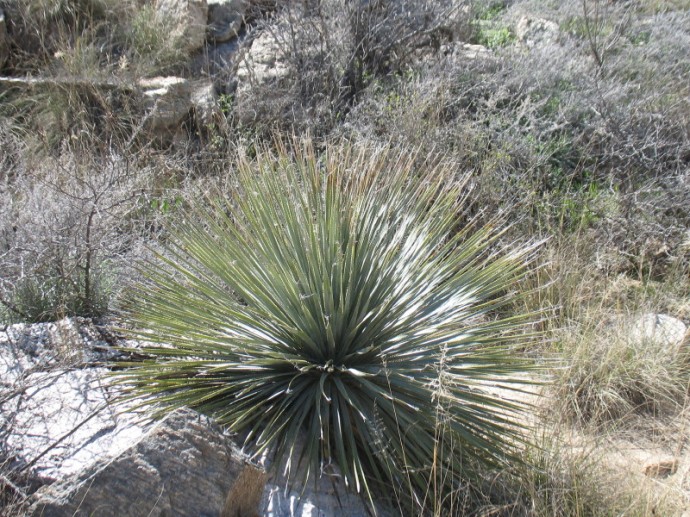 There was more to discover and I was perplexed as to where the jeep trail road was, wondering if we hadn’t gone far enough. We picked up on more jeep tracks which had gone in and out of the stream several times. Then, we found bicycle tracks and watched them continue across a wide area of the stream and up a hill. It was now 1:00pm and the sun was more intense. The strap of my bag with two kilos of water was digging into my shoulder a bit. I knew that I wouldn’t have a problem if I had had the wrap under it as usual. The sun getting warmer, I wondered if I might get a burn on my shoulders, but there was no sense worrying about this because I didn’t have the wrap to protect them and there was nothing that I could do. I surmised that this may be the last no back up covering hike that I do. I had been presented with just too many positive reasons to have a sarong or shirt, at least stuffed in my bag.

Following the stream, I climbed up on a jutting rock. There before me was a fine pond, longer than an Olympic size pool, deep enough to swim and relatively wide. At its head was a cute waterfall. This area would be a great place to backpack in, spend a night and another day just hanging out skinny dipping when the waters get warmer.

Discovery of the Olympic Pool

We managed to find a jeep trail attached to the meandering through the stream tracks, but the trail didn’t seem to continue up the hill to the south like the satellite pictures and maps foretold. Just as we were heading up the jeep trail and looking for a blue rock and other landmarks, we had another encounter with a nude man. This one with a happy dog. This man showed us where the blue rock trail was and asked us if we would mind some company on the way back. We didn’t mind. As we arrived at the creek again, going down the trail, we found the lost jeep road going up the hill. Somehow we had missed it earlier. We made our way with our two new companions. Eventually, we bumped into someone else, nude with a dog just arriving. He knew our companions. All were regulars frequenting the Canyon.

After having split up with our new friends, DF and I decided to sit for a while at creek side and just enjoy a waterfall, as it split over rock formations. 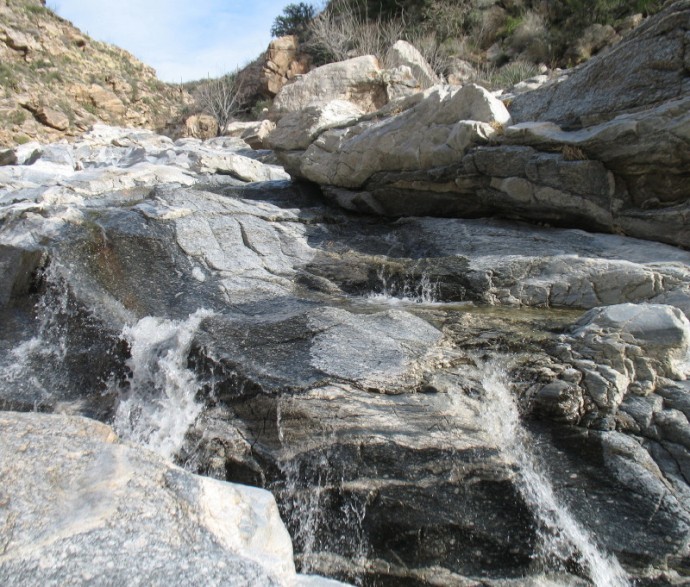 It had been quite a sensual day. There was chilling breeze where the canyon thins to a Bernoulli’s tube, warm, cold, sharp, smooth, slippery, sandy rocks. The sun’s warmth. Soft and smooth surfaces. Sights of generous beauty, and exhibits of the wonder and power of nature. There were examples of the grand lack of static in the universe. There was the joy of a newly discovered and wonderful nude habitat to visit.

We climbed out of the canyon. The rocky climb was surrounded often with these wonderful pink blooms. 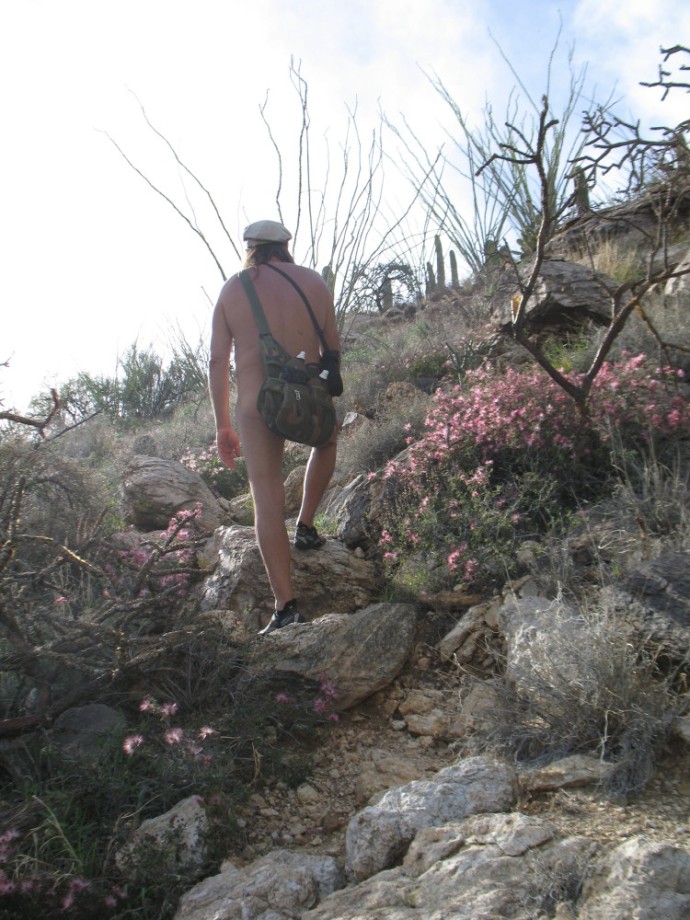 When we arrived in the parking area, there was a sedan next to our truck. I just walked across the road nude ignoring it. DF gave me warning that there was a man in the driver’s seat and we changed into some shopping clothes on the opposite side from him. When I walked around, I found him pleasuring himself. Guys like that give nice places a bad name AND I realized that I didn’t have to get dressed for him.

We bought some diner and took it to DF’s place to watch a movie snuggled next to each other naked under a blanket on her couch.