My Private Place for Naturism #1

It is good to have a special place that is near. A spot to enjoy nature, to roam naked and naturally, to meditate and just be. This is the first installment of a series, which takes you with me, as things progress. I’ll explain how this works. Perhaps you will create such a place. 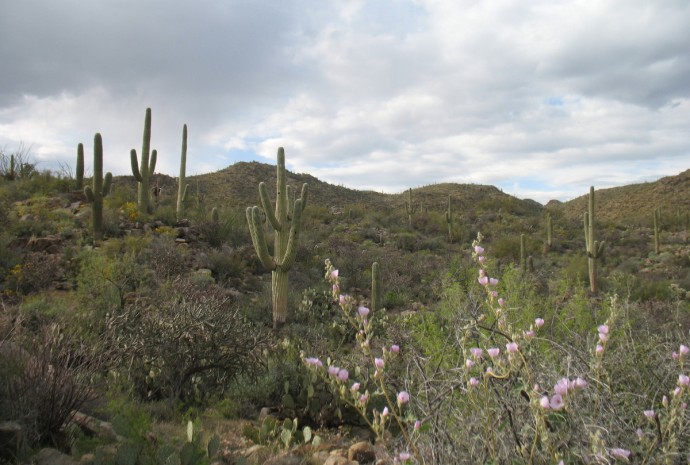 The Planning of the Plan

Spring begins here around Groundhog Day. It gets to the low 70’s around now. BUT, this morning, I’m out there and it is mid to high 70F’s, as if it is March or April! I’m naked the air feels wonderful. I’m here to testify that spring is coming to a venue near you and it’s gonna feel Grrrayte! I walked out the jeep trail and then up the hill. Today I just wanted to head cross country in raw desert. Most of the year the rattlers could be hanging under any bush or behind any rock that I might need to step over. Today, they are hibernating giving me free range and it is a good time to visit these areas off trail.

There is a fine rock out there for laying on. It’s big enough for two and very comfortable. It is a tad hidden, being in a gully. I decided that that would be a good start. I maneuvered my nude body through and around the sharp everything. There were quite a few cholla buds and branches on the ground. The packrats have been busy distributing them. As I came around the side of a hill, a handsome buck startled me and I watched him bounce, as deer do, away toward my house. Man, he had such a rack. It happened fast but there were five, maybe six points on each side of that set.

There have been rains lately, a record rain the last week. I have been finding the tracks of a doe all over my property and it looked like another larger deer. As I taught a class in my living room last weekend, one of the students spotted the doe up on the ridge about sixty feet out the window. Someone mentioned the front tracks appeared to dig in the soft sand more, indicating a buck with a heavy rack. He was so correct. Night before last, as I sat here on the couch, there had been a loud jostling outside the window on the patio. Large animals were hustling out of the area, spooked by the friggin’ dog from next door. This deer was large. Everything came together in a moment of grace. I was privileged to watch that guy. There were deer tracks in the soft sand everywhere I went, today.

I proceeded and found water still trickling through this desert gully. DF had stopped to listen to it flow through, four days before, while we walked along the jeep trail, showing her visiting sister the desert. This artesian trickle must be a magnet for the deer. Avoiding the mush and mud, I leaped across and continued my walk, mostly going from rock to rock. I like to avoid crushing the soil, the plants, and avoid those very prickery cholla pieces. I just have to choose which rock appears stable and be careful of each step. I don’t want to find one that will shift under my weight as a surprise. The rough sharp surfaces felt very nice under foot, giving me a sensual workout through the thin soles of my Vibram five fingers shoes.

I made my way to this favored rock. The growth around it was winterized (bare), so access was easy. The rock temp was perfect for my nude body today. I laid back and soaked up the sun. It has only been a couple of months, but I had already begun to forget just how wonderful clothed with such a warm sun can be. I stripped off my shoes and socks.

As I lay there, stretching and enjoying my primal experience, my mind began to wander towards the coming construction and the need to adapt to the change. The construction will be a problem for my nude use of the jeep trail that I have used nude for twenty years. It is smooth and wide enough to jog and walk on, wandering through a 45 acre parcel. I haven’t seen another person on it in all of that time.

I saw that this rock isn’t visible from the road that goes nowhere, but up to another building pad in the desert. That pad is less likely to be built on soon. It is solid granite with slopes. Only walkers might notice me, I’m thinking, but I’ll have to research this more.

With this in mind and after probably more than a half hour catching rays, I took off, at first climbing rocks and then back to lush desert. This was the only way through the thickness. I was on a ridge that would take me to my backyard. I looked down and there is a small valley that fans out to my desert meadow. The next ridge would shield me from the view of the jeep trail and that new house. To the east, there are distant neighbors and the mess that a goof neighbor has made. Apparently he is living in a trailer there. I had to avoid his view and another’s, using the ridge-line and vegetation. It was fun stealth naturism. No sight of me from the waist down, when they could see me. I was exposed to so many homes circling a couple of miles, but they were all too far away to be sure what that small figure on the hill, me, wasn’t wearing. Fun in the sun on a near perfectly day.

I took this tack to my door step, walked indoors and drank some water. On the way, I had decided that I would do something new. Something that I thought that I would never do. I will build a trail through that area. It will shield me, as an alternative to the jeep trail. Nobody goes that way, but maybe every few years, but me. If I did it just right, it would be hidden. I could start it off of my property and the trail head wouldn’t be known. It would lead to that nice hidden rock in a place where few ever go. If I am careful, it would be just enough to keep the snakes a bay, be hidden in the brush and look natural. A couple of bends and the use of the rock to rock walking format and one wouldn’t have the usual treading to identify it as a trail. I was soon back out there doing my preliminary tracking, designing the most expedient way to naturally make this passage. A pair of leather gloves, a broom and shovel and I can do this, while enjoying the sun.

I went back up the edge of the ridge, looking for the best passage and checking views from the neighboring lands and that new house. I have been where the flood plain is in the base of this small, kind of valley, many times. It is covered with jumping cholla and difficult to pass through. Many of these dangerous cacti have aged and died off during the last couple of years, and so, some of the area is more accessible, now. I surveyed all the way to the rock, observing the natural trail routes and animal tracks. There is a zigzag route from one ridge to the other and through the floodplain, leading back and into my lot. Most of the obstruction is a narrow growth of various plants at the top of the flood plain. Once I get my trail placed through there, there is little clearing to do, just a few dead branches and some prickly pear to chop away. I’ll use a broom to sweep away the debris, so I don’t have a ball of prickers in my foot. I’ll do this and no one will find it. It should last for years.

If the new neighbors are not nude tolerant, or better, I can still exercise (pack, or run) on the old jeep trail with a kilt or something. Also, with this trail, I’ll still be able to wander off of my property unencumbered through a pristine area, anytime. It is a fair distance to walk. When the privacy fence is done on my property’s south side, I’ll have a barefoot-all-over running trail on my lot, and this.

Spring is coming and it will be wonderful. It is just around the corner, before you know it, just like stumbling upon that deer, we shall all feel amazed.