It had been wintery warm 60’s and Df and I decided that we needed a hike on Thursday. The weather report told of a high around 69, very encouraging. We awoke to the sound of dangling jingling wind chimes and lay looking out the window at swaying reeds and mesquite branches, at her house. The plan had been to try out her new 5 finger KSO’s at Redington Pass, but that wind would create a strong chill factor. After deliberating for way too long, we couldn’t hold back, there was a chill, but things were pretty comfortable in the windbreak of her backyard. We decided to try a closer short hike up Ventana Canyon with clothing on. Ventana trailhead starts in the lush growth of the foothills, next to a resort hotel of the same name. I hadn’t been up in there. She had once when there had been torrential rains and rushing water flowing. It is on this day, bone dry. Extremes being the rule around the world, our latest here is that this is the first January in the history of measurement that it hasn’t rained in the “old Pueblo.” 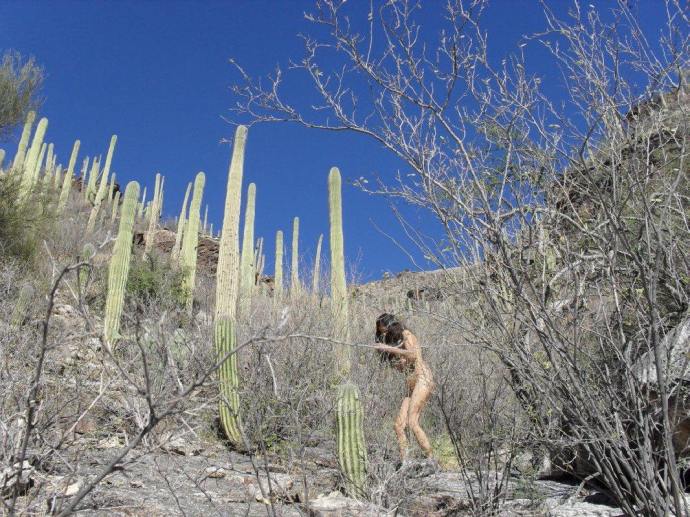 We took off. This place has lots of hikers, even during the week. This day provided no slow times during day, because of the consistent nice weather. There were hikers coming and going about every five minutes or less. It felt as if there was simply no elbow room.

The temps were nice and there was a lot of windbreak to the point that it began to get hot. DF tried pulling her t-shirt top up and then dropping it whenever we came across someone, but it was a hassle. She stuffed her top into her fanny pack and draped her regular shirt on, leaving the front unbuttoned, clamping it together when passersby approached. She was given some breathing air that way. I suggested taking it off and just holding it over her breast when they came, but she wouldn’t go for the idea. Meanwhile I had teased her with the political world’s inequities by stripping my shirt off, tying it around my waist. She grimaced that it wasn’t fair. I thought that the whole thing wasn’t fair. I was hot and uncomfortable in the containment of those shorts. It was just very very wrong. It was distracting.

There was no place to get off of the beaten path and find privacy. We scouted for relief. We wanted to meditate. I couldn’t gather my sense of oneness in nature in the situation. You see this was the first time in years that I remember hiking with my clothes on. It just made no sense. My humanity was imprisoned. I’m no longer fooled. I know better.

After an hour of recon, we decided to try climbing up a very large rock and see if there was, as suspected, a hiding place behind it. There was a good granite slope to lie on, a large prickly pear and bushes between the trail and that spot. Although it is winter and the foliage is sparse, it was thick enough to hide from the trail below. We sat and saw people about thirty feet down the slope on the trail, through the bushes. But, could they see us? If we kept movement to a minimum, it should work out. We could hear people coming and voices, we knew that we must be quiet enough to not get their attention.

Experimentation Before Settling into Our Best Hiding Spot

Across the wash, maybe 100 feet or more, there was a rising in the trail and heads could be seen. Those heads could clearly see back at us, but we were able to have the situation work. The trail goes up a canyon that washes out. It is consequently a continuing group of large river rocks that must be walked over, or upon, carefully, or you get them stuck on your face. Everybody was generally looking down at their footing over there. Across the wash, where we watched people’s faces, the trail was very steep. They were all too busy stepping carefully to look over at us. We stripped naked in a flash, meditated, lay there basking in the sun and eating. We were pleasantly nude and in plain sight, for over half an hour. We watched numerous people walking by, NONE the wiser. We liberated Ventana Canyon!

My whole attitude changed in this sanctuary. I enjoyed looking up at the very numerous green saguaros against that incredibly rich blue Arizona sky. We took pictures. DF got up and roamed around the area happily. We watched the people and various personalities as they passed. The climbing and wriggling around the bushes and thorny branches had paid off. My attitude was again at peace in nature, my body tanning in health.

I occasionally check out two websites, Go Topless and Topfree Equal Rights Assoc., TERA, for the latest info on the legal side of this topic in concern of inequality. We can’t all become as normal as a man with no top, if we are not all actively making it a norm on the trails, the beaches and during physical exertion. Men got the right and made it a norm, years ago. It was uncomfortable in public at first. It still can be in a given circumstance. Women have to do the same now. Men need to be supportive.