We got a smokin’ deal on a condo at a golf resort in Sedona, Arizona. It was a full apartment, fireplace, etc., the whole week, just for the price of a day. We also had a spare attached apartment with it. We then split that with DF’s cousin, who took over the property for the last couple of days. DF had to return for a training class. Smokin’!

The weather has given us exceptional unusually high temps. Sedona was going to be high 60’s to low seventies each day and sunny. There would be lots of warming Arizona sun. It would get very cold at night. Sedona is a Woo Woo capital, with 64% of the 4 million visitors each year looking for a spiritual experience. The scenery is just amazing; the foliage ranges from high desert, to unique forest, and deciduous along the creek sides. This report will have to be presented in three parts, one each week, because of the length of the time that we spent there, and the photos of the awesome, which must be included. The setting and flavor of this trip demand pictured scenery, with free range and stealth naturism peppered amongst them. To indicate the beauty we experienced, we took over 500 shots between us, so I’ve chosen just a few….

We climbed into the 4×4. The packing had been crazy. We had to plan for every temp and contingency. We weren’t sure what to expect. We have primarily been doing nude vacations for years. We generally take very few clothes, if we even wear them. These can be placed in a small bag, with towels, for both of us. We had a truck load of clothes, six bags and then some! Clothing is nuts! What a hassle, stay naked.

I got into the truck totally naked, with all of this clothing in the back. It somehow just didn’t seem right. DF came out dressed in a long skirt. “To each his/her own,” I thought. One stated goal was agreeing to spend as much time as possible naked, which is not a tough choice. We had many ideas, but after the hassles of trying to plan this trail, or that, which cliff dwelling, etc. we decided to not plan and just do what we felt like doing each day. Maybe just hang in the condo and read or romance a couple of days. We felt that it was better to leave it wide open…the skirt came off somewhere down the road.

We stopped at Arcosanti a visionaries experiment with architecture and community planning, which has had architects contributing, apprenticing and learning since the 1970’s. Here’s their website:

There are numerous pictures of Arcosanti here:

We had both always wanted to visit. DF, who had her passive solar dome and me, building my strawbale houses and our other experiments. It was very interesting, but not a naturist tour.

I had to wait for a jogger to pass and then get dressed in the open parking lot. I needed extra layers of clothing, which slowly piled on. The wind was cold on top of that butte.

After leaving the fascinating, Star Wars-esque edifice, within another half hour, we saw the red rocks of Sedona. Everything seemed red.

There were red buildings placed on red rock, red gravel pasted into the asphalt in every road, we drove my red truck to the resort and out pops two tired people, dressed in burgundy. During check in, we decided to take it easy and enjoy the place. We unloaded (mostly clothes, jackets, pants skirts, sweaters, layer upon potential layer), stripped, cranked up the heat, set up household, lit a fire and ate. I checked the angles and the shades on the windows for privacy. We then curled up on the couch under a cozy comforter and watched a couple of rented movies. Nice, but that Mel Gibson, Apocalypto, was not romantic. It was brutal, nasty stuff. I got a little value out of the notion of the political power comparisons of then and now, during the sacrifices. DF commented, “cute butt” a couple of times (loin cloth natives), but…ick.

The shocker was the discovery in the bathroom. It had walls made of mirrors. All reflected back at each other in a triangle. We were blasted into the sight of every well-lit detail of six or seven of ourselves. I couldn’t even pee without watching a profile of myself standing slumped over in attentive activity. So much for body acceptance! “Crap, the thin spot is growing to bald spot on the back of my head”, “The ponytail’s shredding”, “Dude, you slouch too much”,” When did I gain that extra weight in the belly?”…”time for a health kick.” I got so I didn’t like going in there. It is easy not to be critical of my body, to accept its self-image, when I don’t spend meaningful time staring at it, but this room was the “Box of Ultimate Truth and Scrutiny!” Hold on, naturism isn’t supposed to be about shame!
The compensation was that the triangle was dominated by a large heart shaped Jacuzzi bathtub!

The next leisurely morning, we awoke to look out of the window. We looked through the pinion pine, out onto a fairway and on, to some fine red rock sculptured hills. We chose to have breakfast out on the porch balcony.

View Off of the Balcony

We started in nice thick, comfy, terrycloth robes, but then discovered that the rail was thick enough on the second floor to hide our nudity from the surroundings. The angles of sight would work effectively. There is a public stairway going up the hill to the Jacuzzi/spa and then the pool area. It would look down, onto the porch and into the livingroom, but there was minimal traffic. I had opened the curtain slats just so.

The balcony was in the shade, which felt a might brisk, but I found my friend Nuduke’s comment on focusing on the inner warmth helping (actually all during the stay there). Stealth naturism was peacefully accomplished. Tasty warm tea was the nectar of adaptation. We had another porch in the other apartment that faced south for sunning, but the view was a parking lot.

We sat drinking warm chai, eating cinnamon raison bread and watching a large flock of ducks hanging out in the pond between fairways. Every so often a golfer would startle them into flight and they would circle around in mass as a treat for us. We attempted to photograph this event.

By afternoon, we had decided to take a leisurely tour to acquaint ourselves.

We visited the small hillside church carved into the cliff face and drove around Sedona. 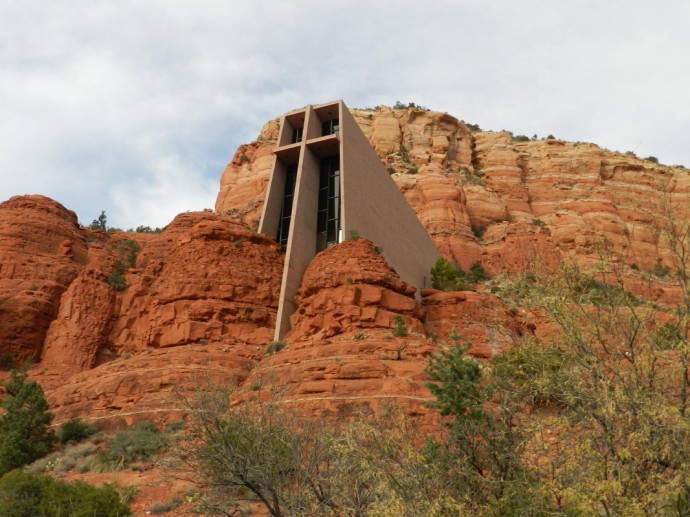 We ended up at the base of Bell Rock. 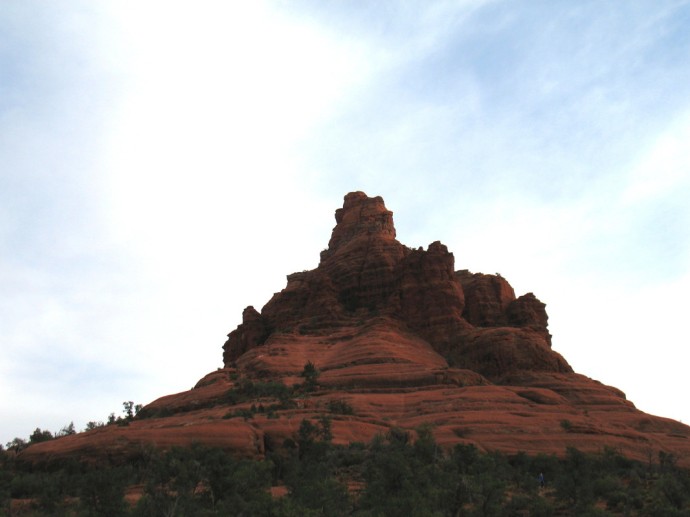 This is a popular spot and had lots of people (There had been people everywhere we went). It is in the shape of a bell and where it spreads out, on the north face it is mostly sandstone red rock slabs, easy to climb and not slippery. 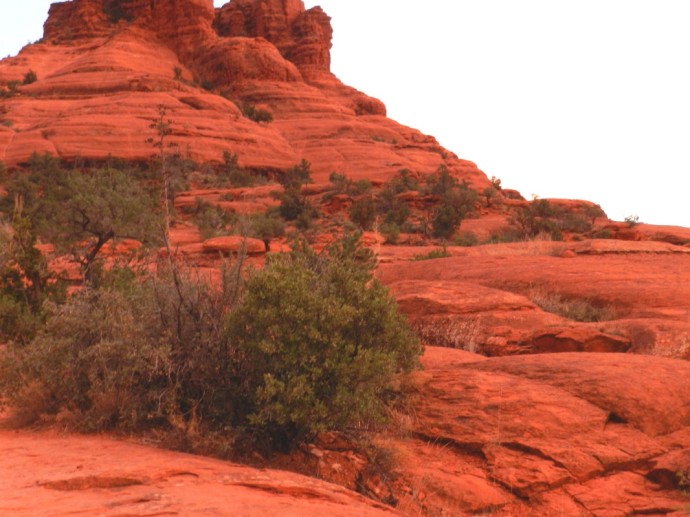 I had to dull the color on this photo. The real thing just looked too unreal!

It looks up at nearby Courthouse Rock, west. To the north is a grand panorama. 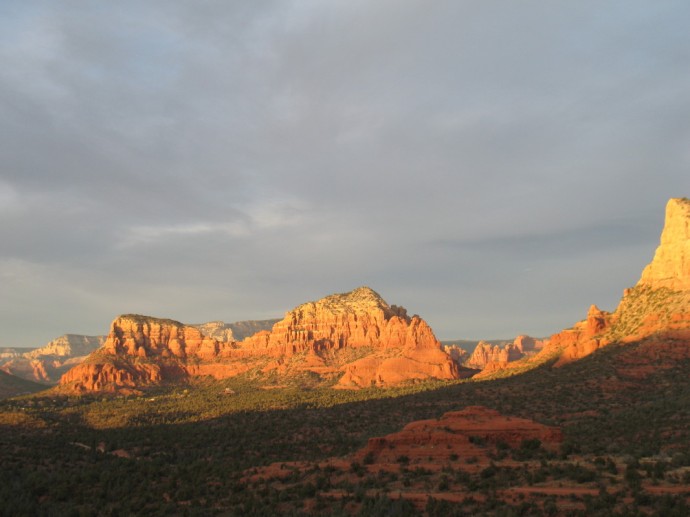 This part of the bell was where the energy vortex is supposed to be. Being familiar with dowsing, energy work, etc., we were interested in these famous places. I began to notice the energy and then realized that I was amongst a series of cairns marking the spot. I took a photo of a cairn and a twisted juniper tree, and then walked up to it.

Wow, I started giggling. In that spot, the energy was powerful stuff. Twisted trees are associated with vortex energy.

Trunk with a Twist

It was getting into sundown and we sat watching the sky change into one of those wonderful slowly changing Arizona sunsets. 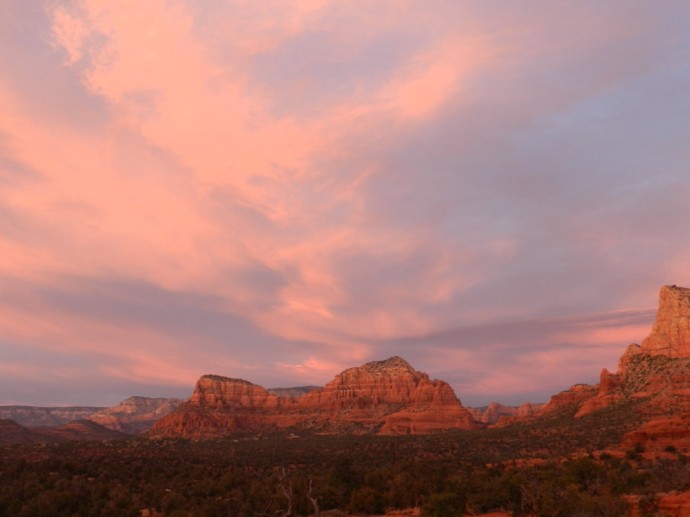 In this place, the rocks all change color, too.

Courthouse Rock with the lights turned on. 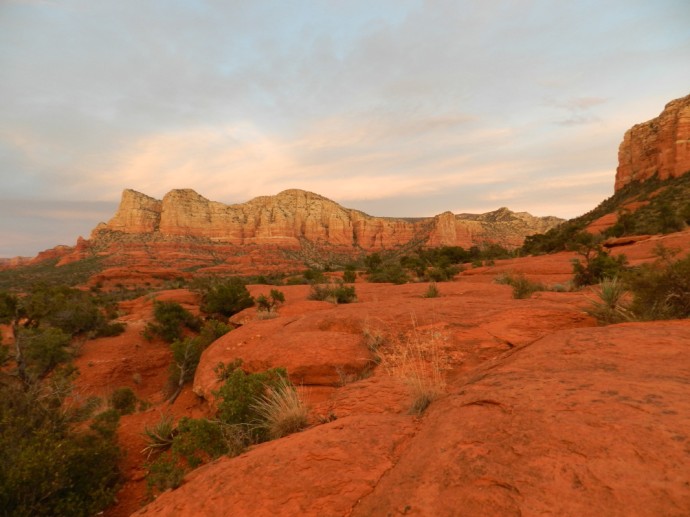 We were last to leave.

On the way back, but on the main drag, we saw “Desert Flour Bakery.” We began a plan to take clandestine nude pictures there (DF stands for Desert Flower). The town got quiet about the time the air got Fureezing cold. Yes, for us, that IS spelled with a capital F. That project didn’t receive opportunity to complete itself.

Having had no opportunities for nudity, it felt so very good to return to the condo and slip off those pants, but the freedom was not to last. DF found entertainment for the evening…six million Christmas lights at a resort complex downtown. We did it. My favorite display had nothing to do with the lights.

It was fun and then we ended up lost in the art gallery complex next door. This place looked like a set for a 1960’s Zorro movie. 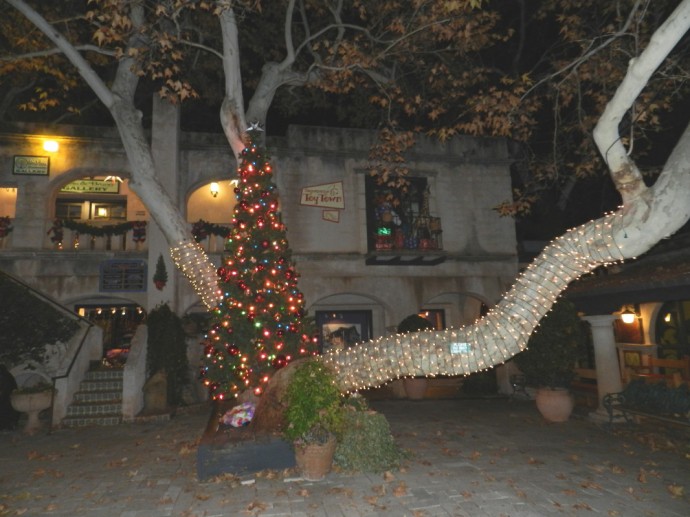 The wares in the windows were top of the line Southwestern art and crafts. 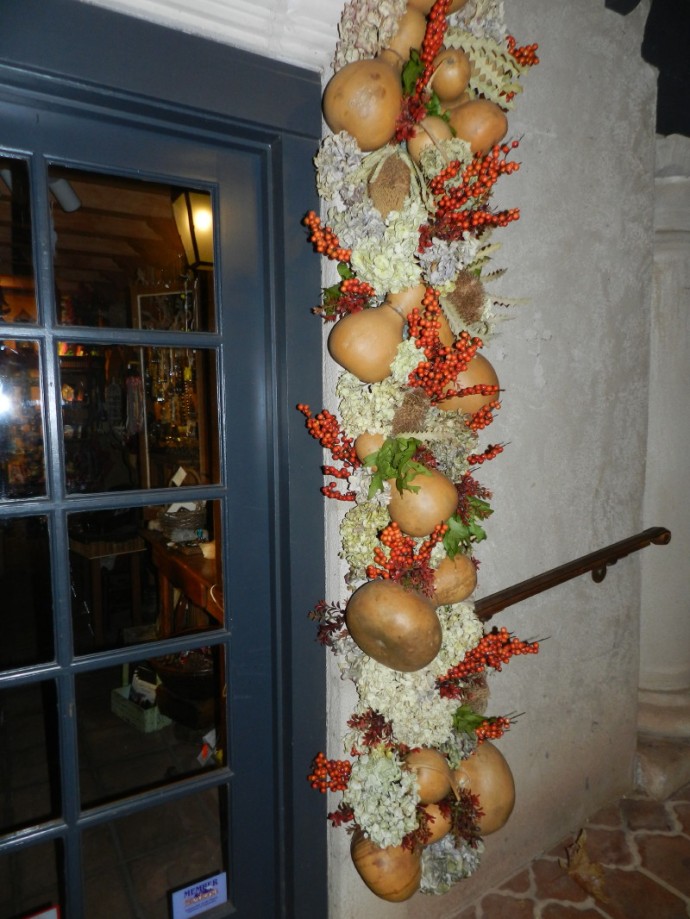 Timing is everything in paradise. On the way back, the nearly full moon was rising over the high mountain ridge. We pulled off into the Bell Rock parking area, waiting and watched. The other vehicle left. The park was all ours. The two lane highway through the area was quiet. Those high rock cliffs began to radiate with the moonlight high in the sky. She was like high beams as she popped out of and slowly rose above the mountain. She illuminated every detail and shadow around us. It was magical. We danced and sang once again, smiling, “Dancing in the Moonlight.” We jumped back into the truck to warm up, and then got out again. Imagine the previous photos from Bell Rock lit up with intense moon light. You can try to imagine the immense show, but being there was something else.

Meanwhile back at the….

It was just before ten o’clock when we arrived back at the condo. Time to scout out the jacuzzi for some stealth naturist activity. We crept up the stairs to the hot tub. There was a tall steel bar fence around it. It did have a great view. We were however, greeted by a group of people who were already in it. They invited us in, but soon commented that we weren’t “dressed” for it. If only they could conceive how we had a most appropriate attire under our cloths and jackets. They told us that the security had been by once and that it would closed at ten. It was ten. We saw no opportunity, then or later. As we went back down the stairs, we were greeted by the staff security, going up to lock us out.

That mirrored bathroom has that full on heart shaped bathtub for two, with jets and the whole fun thing. We added candle light, incense, dimmed to soft lights, gathered two wine glasses and each other. Wonderful, wonderful, wonderful. 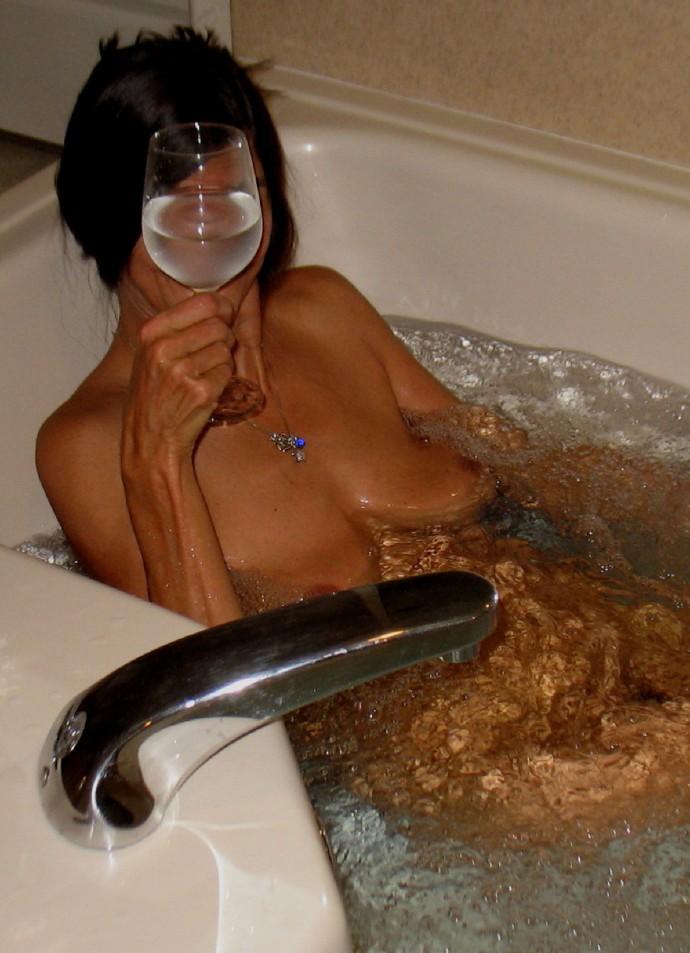 (to be continued next week)