We left Saturday morning for a fashion mall in Chandler Arizona, a suburb of the Phoenix sprawl, to visit an exhibition of the Elio motor car. This 84 mpg, three wheeled , two passenger, $6800 new, car will be in production within a couple of years. I thought that it might suit my future. The trip on the interstate and finding the place was just too much trouble this morning for any nude driving. I was on a mission. Carnuding would have to wait. A speculative report about carnuding in the future Elio will follow this report.

After inspecting the prototype, in the parking lot of the mall, I pulled slightly away from foot traffic and we finally disrobed to comfort. We were going on a relaxing drive to the Eden Hot Springs through the color and ruggedness of the Superstition Mountains, the San Carlos Indian Reservation and into the Gila River Valley. It was a pleasant couple of hours of scenic driving. 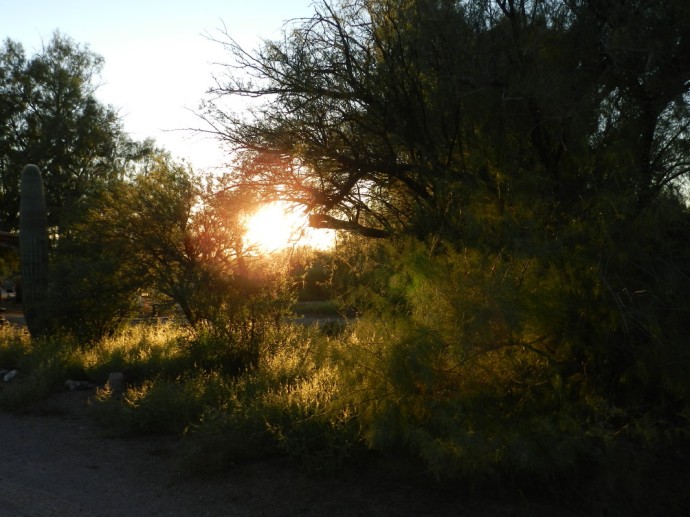 There were a few Native American hitchhikers, but we had no room. As we passed them, DF quipped, “Wouldn’t they be surprised.” We began to surmise what kinds of reactions a hitchhiker might have, upon being picked up by a friendly naked couple.

Arriving at our destination, we found friends and a pleasant campsite under a Tamarisk tree and near the double Olympic size mineral pool.

It was already mid-afternoon. We had missed a good part of the day. We set the tent and climbed in the hot tub completely relaxing. I have been enduring a crippling foot problem. The large pool gave me some needed exercise, without putting pressure on the recovering foot. A quick slip over the retaining wall and we calmly did laps across the cement pond as the sun was setting.

The ducks flew in formation as before. This time there was a cloud of another bird species amassed in the sanctuary.

After getting out of the hot water, the air was wonderful, but in time the night air began to cool. We decided that dressing lightly would be comfortable. I wrapped around a kilt and long sleeve T to join others for prepping a meal. The pizza oven was being manned. We tried a recipe for off of the stalk brussel sprouts. Tasty mesquite baked pizzas, came out of the oven. I helped prepare a pizza-like desert. A flat bread was coated with coconut oil and cream cheese. That was topped off with peach leathers, raspberries, saguaro bud paste, and chopped chocolate covered walnuts.

Gotta build me one a these.

There had been a small wedding earlier and the feasting was winding down. We all adjourned to the large tub at the pool to relax and socialize. A fire was provided. I took over the care of a friendly lapdog as the master took care of the fire and soaked. The full moon arced over us. It was a very pleasant naked evening and wedding reception.

We thought that the Eden might be more overgrown and more Eden-like after the season of growth, but it brought no new photographic opts. My foot flared up from too much activity too soon, so a naked hike to the “cold springs” was cancelled. I didn’t get very far on that second day, but the pool was wonderful; I couldn’t complain. 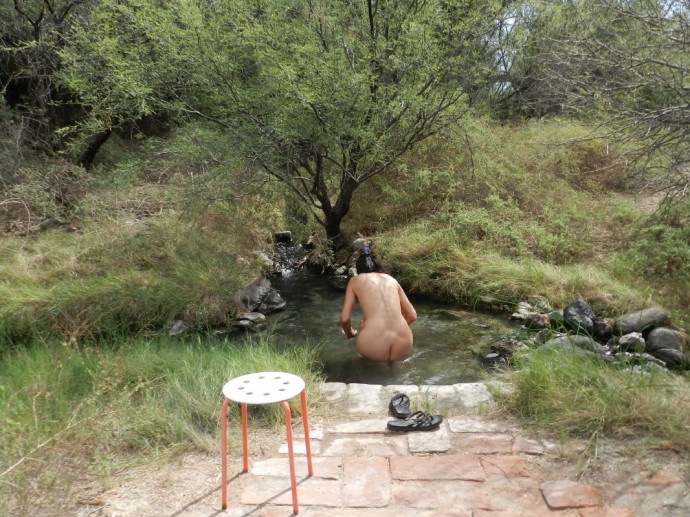 In midafternoon a human-like alien life form came to visit. It was a camouflage green with huge bright yellow rimmed sunglasses for eyes. A lady had been covered head to toe in the hot mineral mud. It fit like a wet suit, or body paint. Two others were interested and she lead them off to get sluiced up. We soon followed. 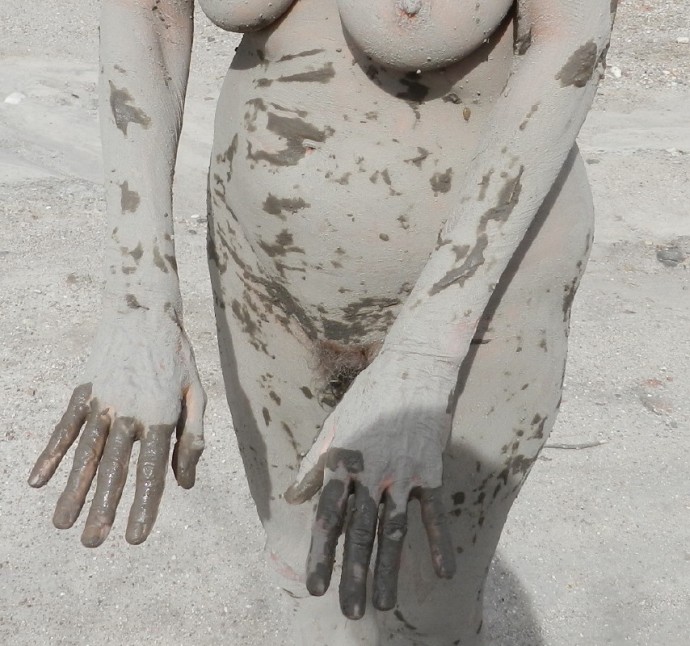 We were greeted by the troupe, now. A mother and her little boy stopped as we were finishing. It was an alien invasion. People were turning green like the spread of Zombie bites. I wish that I had permission to publish the pictures.

We all returned to the pool. On the downstream side there is that pool of water that has the jaccuzzi -like flow of a waterfall as the pool drains into it.

It is here that the dried mud comes off. First green and then clean. All were left with silk smooth skin and a great deal of giggling and laughs.

Nudity catches on when it is accepted. The clothing option worked out wonderfully. We went to the community kitchen to make lunch. Nudes wandered the property among the then textile clad, easily. Several of us sat at the picnic bench tables and conversed as we ate. I played guitar. I learned that BEER hops are in the same family as cannabis, but you can’t make cannabis BEER, or smoke hops, but you can have a can-a-beer.

Elio! I have been watching these for a couple of years. I’ll take a stab at humor and make a report from a free range naturist’s perspective. We looked it over and then stood in line to sit in it. Eighty-four mpg is pretty handy for living in the country. 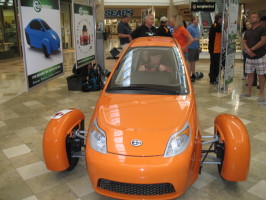 Travel would be so fun cheap, even if aftermarket saddle bags dropped mileage to 70mpg. The aerodynamic of the body is the best fuel saver in the design. The trunk space is about the size of two ultralight backpacks very crammed. There is little room for conventional clothing, unless you stay in rooms and restaurants, then it is enough space. The trunk has room for an overhead flight bag and then some extra in a triangulated space above it. As a free range naturist, I have no problem with minimal clothing. A cross country trip, hiking and backpacking at few select areas naked, might feel just right for the expense of pennies on the mile. This is a big country. There is plenty to tour.

I do have concerns about carnuding in one. They sit low, although with the tall side panels close on each side, one would be more covered than in say DF’s Civic looking across the two seats. The passengers also sit in-between the wheels, further disturbing the angle and distance of the view from other vehicles. That actually keeps the view of nude bodies to a minimum.

The back seat would be secure from view. With small windows sitting slightly forward, one sits back in an area akin to the rear of an airplane cockpit. They are lowering the rear seat an extra two inches in the ultimate design, further hiding the passenger. My head had no room to bounce in there, as it was, a prototype. The driver’s headrest also obscures the view. I confess that I felt a tad claustrophobic back there.

It is the attention that one would have that concerns me. People would constantly want to get a look and ask questions for the first year, or two. It is unique, cute and eye catching. I’d have to constantly have a kilt, or something to wrap around, every-time I stopped. In some instances, I suppose that people would be distracted, looking at the car rather than the driver. Stopping and camping discrete and stealth next to one of these might be impossible. There, I’ve put it into a free range naturist’s perspective, which was part of the reason for our trip. I wanted to check it out.

Yea, over 100mph, and it feels fun sitting in the middle of the wheels. It sits just a quarter inch lower than a Honda Civic, so it can take most dirt or gravel roads. Wheeling on forest service roads all over the west and hiking on in, should work out fine. I’ll be keeping the old Toy 4×4 for sport and that has at least a couple of hundred thousand more miles on’er. The price is $6800 and now, another $800 for the automatic transmission, half of the nearest priced new car.
Those black seats would definitely need a terry cloth cover for my bare butt. Black is hot in the Arizona sun.

One thought on “Mud baths in Eden: A Trip Report”