The Hot Springs had been fun a few weeks before, but we felt that we had just toured it briefly and wanted to spend some more time there. The opportunity arose to spend a Saturday and Sunday there. We needed to get our tarp/net tent arrangement honed, learn its quirks and try it with the new camping quilt, before heading off for an extended stay the following week.

After a not so early start, we arrived on the property. All of the nice spots were taken. There was a larger crowd this time. Then, there, sitting before us, was the spot next to the swimming pool, under mesquite trees, unoccupied! It seemed too good to be true. I pulled in and we began to set up the tent and lunch. There were already a few people skinny-dipping in the pool. We recognized a couple of women from the previous trip. One possible reason that the spot was empty occurred to us, as we realized that the mesquite tree was bleeding its black sap. We had to arrange the tent placement accordingly and back up the car, but it was working out. The ground was soft and the area clear. 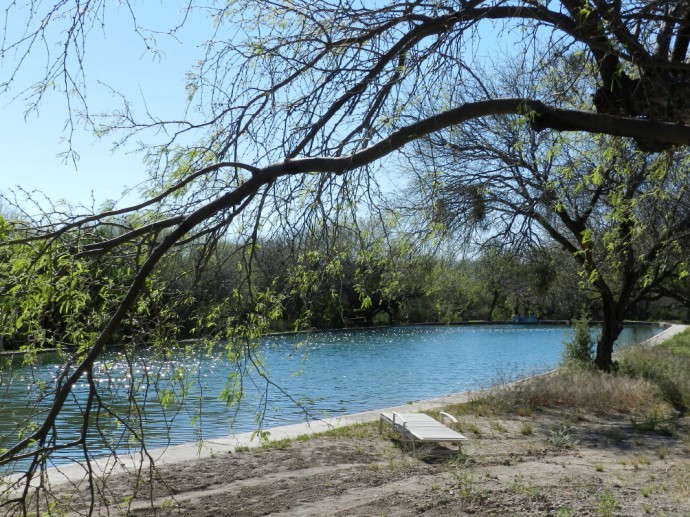 Pond from the Campsite

We searched behind the local bushes for a place to have a latrine. The bathroom building was a ways to walk except for exceptional duty. This lead to the discovery of a rising blob of mineral mud, which was cracking at least six inches and more deep in large blocks. This was alright, but when taking some pictures of one of these, we noticed the cracks stopped at the edge of a moist spot. There were two holes in the fresh mud that didn’t make sense. Then someone showed us how when you throw a rock into it, the rock disappears completely, leaving a similar hole…quicksand! Good to know. Glad we didn’t try to walk on top of the blocks of cracked mud. 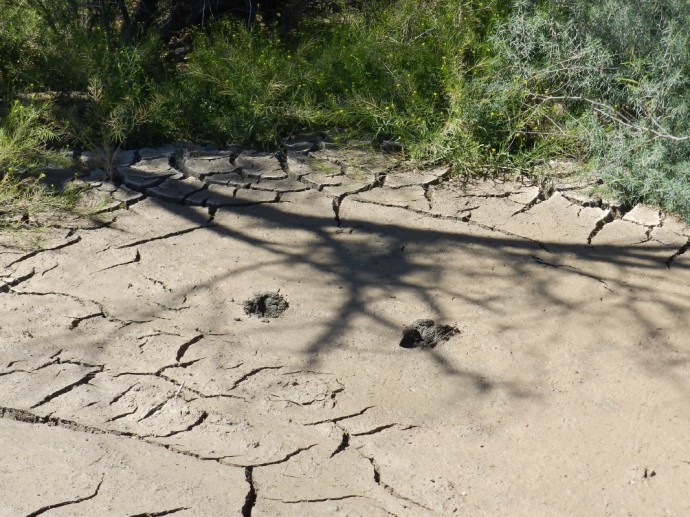 The next order was to enjoy the cement pond. This double Olympic sized pool has growth on the bottom and much of it is slippery. It gradually slopes to diving depth, about 2/3 of the way across to the west. I walked it slowly to find this out, ever so slowly submerging into the average 85F water. It changed temperature in pockets as I went along. It became warm, cool, hot, etc. Before, I had been told that there were bubbles in the warm areas, but there was no such thing, that I could observe. It is just the way that the water configures as it makes its way across the pond. It starts from a hot water stream feeding it in the east, to a sectioned off hot tub area about 25 ft. square. It then flows over the partition into the main pool, making its way across the length, to draining where it overflows on the other side. This produces current, pressure fronts, sometimes boundaries of warm and cold water. It doesn’t heat as a whole, but more like the weather systems of the atmosphere. It is essentially about an acre pond with heated water, yet an interesting sensual blend of sensation as it is crossed. Perfect. We had foam noodles, and blow up rafts, we swam, and for hours, during our stay.

This larger crowd was all ages, young, old, children, a breast feeding nude mother and baby, mostly a median of thirtyish, if I’m a good judge. There was a hip spiritual environmental slant to many conversations, which were freely floated into as I crossed the pond on my raft, or calmly doing side stroke. “Just got back from visiting a shaman in Peru… was in India two weeks ago…try eating this… barefoot all over hiking? I’m always barefoot” for examples.

I spent a couple of hours playing with the net tent/tarp in various arrangements. I forgot my camera and DF’s got misadjusted and many pictures, including tent pics, were washed out.

We ate a fine meal under the trees, as we watched the action in the pond and the sunset. It is a gathering spot for sunset. More nude people came, enjoying the water, relaxed, watching it all. The ducks came out in formation, silhouettes against the colorful sky. We joined a new friend, a woman from before, to go to the duck pond and watch them land in the reeds. Group by group of about fifteen or more, the formations went through a sweeping acrobatic loop or two and then swooped into the tall reeds. It was fascinating how they would just immediately disappear in the light of dusk. 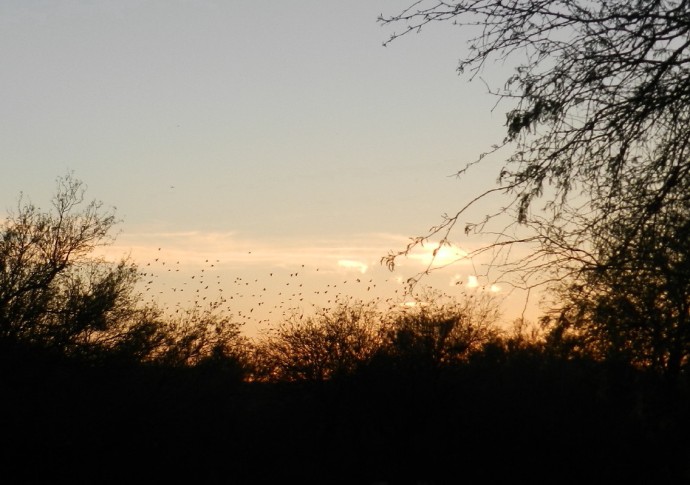 The majority had left the pond. It was cooling and dinnertime.

With a bit of a chill, I put on my new camouflage kilt and sweatshirt and we headed to the party. There at the fire, was a man in a manly black kilt with brass studs. Tending the outside dome adobe pizza oven was the organizer in what he told us was a skirt that he borrowed from his wife. One in every three or four males was wearing a kilt! Not a bad environment.

I began to learn the nuances of wearing a skirt-like garment that has been the realm of females during my lifetime. I learned rather quickly that one has to be careful when sitting down on a cold metal folding chair in a kilt. This was my first day to explore this apparatus. I also learned that if you raise it up, holding it over the fire, the heat rises up. There may be a nice smoked aroma added to ones crotch, but it warms better than pants. There will be other nuances to learn about this man skirt thing.

On a table, someone had gifted trays of delicious various sprouts to just slice off fresh. Pizza was coming out of the kitchen to be fire baked in the mesquite coals of the kiln-like, beehive shaped oven. I gotta get around to making one of these. They are fun. After going vegetarian, I still miss barbecue rituals. The various pizzas were shared. One had ghostly jalapeno peppers on it. My lips turned numb, my tongue malfunctioned…oh yea. There were well done beets that I enjoyed, surprisingly, I’ve always hated beets. Other veggie treats that I hadn’t considered baking in coals were all very tasty.

The best take away was learning how to turn watermelon into salmon. A watermelon was sliced and these placed on the hot campfire, after we put a grill across it. The sugars in the watermelon caramelize and the texture changes. There is a mesquite smoked flavor given to it. The result looks much like smoked salmon and has the texture of sushi. Irregardless, it was delicious.

It was a good time, a young woman with a hula-hoop entertained, amongst good conversation and laughs, a birthday song, warm flames and on. We decided to head back for some hot spring soaking and an early sleep.

We put on robes to be warm, but I soon left mine on a chair and went to stand naked at the fire that had been lit by others. As I stood there, the hot pool became illuminated. There were over twenty naked bodies lit up in it. We were expecting a few, but it was most of the party. Well, it was very pleasant and relaxing. The moon and clouds entertained us as some talked and others just stayed peacefully silent.

We slid into the new digs. The quilt was warm. The net tent worked.

At dawn, I heard a noise, then I smelled a wild animal. DF woke too and thought that it smelled like cat. We saw no one. Voices were heard as the sun arose. When we went to greet the morning, DF found large cat tracks in the mud around the quicksand.

The idea was to get up and head straight into the warm pool, but in the morning mental haze, things don’t always work out as planned. There was breakfast and spacing out and then the leisurely sliding into the pool. By then, many had gathered, some talking in groups some swimming in the roomy pool.

We eventually went down to the far side to try the spillway that takes the overflow out to the stream, then to the duck pond. We passed a pair of young lovers sitting on a stair step in the water, and wondered if they were…well she was sitting on his lap. There is a tub of natural rocks there and the rapidly flowing water massages a body wonderfully. 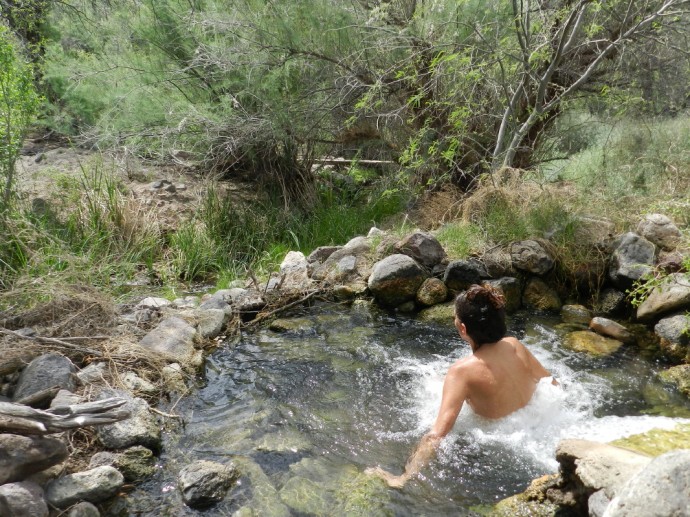 I spent more time working with the new tent while DF floated in the pool. What a wonderful spot.

We had a walk in the wood. We sat in a hotter spring that turned my feet pink and tingly and contrasted with my suddenly stark white toenails. We looked for the massage table to use, but it wasn’t there, this day. We packed up all at leisure, reluctant to leave. 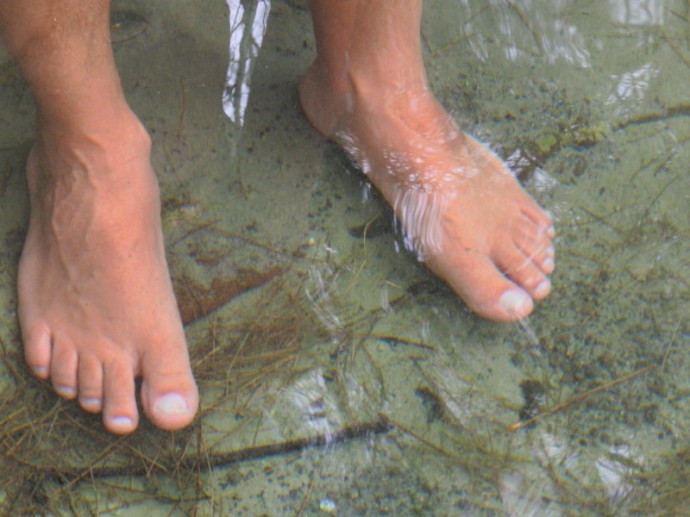 This place is growing on us both. We hugged each other recognizing that we are incredibly blessed. We had a quick Mexican food dinner in Safford (What a Podunk place to wear a kilt). We disrobed and headed home. The dark skies made a notable contrast when an exceptionally distinct ring formed around the moon, just over half full.