Some Place South of Greer I: A trip Report

DF told me that she had taken several days off for another purpose, but decided only do a part of that activity. We would have from Tuesday to Sunday for a trip. I promptly dove into the bucket list, to find a “to do.” The weather would be a factor. It is monsoon season. I hadn’t done complete research, including acquiring maps and contacting the Forest Service. I had internet information, which was some years old and a regional map dated 1976. I was finding that translating this into topo maps with an online service difficult.

In the White Mountains of Arizona, I had Bear Wallow trail mapped and it sounded fun. I had some contradictory information for what has been called the most remote hot springs in the country for a three day back pack trip. These would be the primary two phases of our trip, but I was faced with just throwing up my hands and waiting for better information at the Pinetop Forest Service office. We were playing it by ear.

The first thing to do was to get up into those mountains. I had some experience with the area from the years past, when my parents had a summer home in Pinetop. I had taken a few excursions from there. Our knowledge was limited, but we did have a feel for what to expect. After a decade away, the four hour trip to the Lakeside Forest Service office brought back many memories. The section of odd grade that chokes many a car’s power, the mining/smelter town of Winkleman, the times tubing the Gila River, towing boats and other events causing past trips flooded through my mind, as I reminisced with DF. The trip felt shorter; maybe my perception of time moves quicker. The grand Salt River Canyon where friends have died on its treacherous road was more magnificent than I remembered. The old drive-in movies theater was now closed, the Taco Bell was still there. A host of familiar small things along the road presented themselves to me once more. 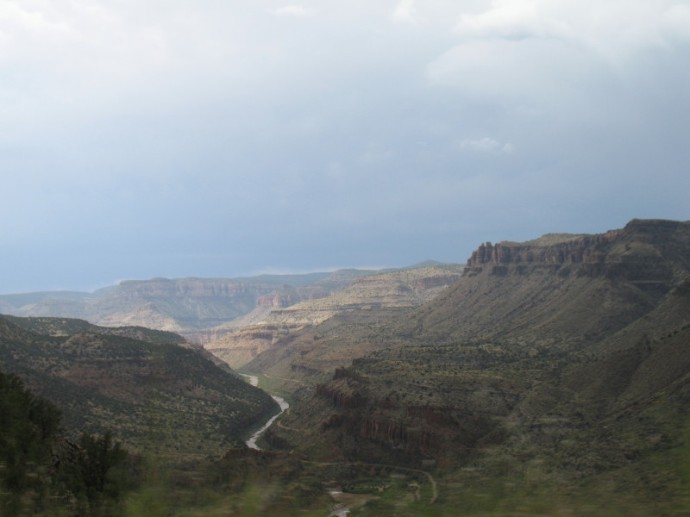 The scent of fresh pine trees began to fill our nostrils as our elevation increased. Sitting in the driver’s seat carnuding with DF, I recalled one of my first nude driving experience along this road. Back then, the air conditioning was giving out in my old van and I had just dropped off my son for a month with his grandparents. I was returning to work in Tucson. The air circulated around my body from the opened windows and disrobing made sense. I had then, also the sense that I was doing something that would be perceived perverted, and even questioned myself for enjoying the experience. It was exciting. But it was getting hotter, as I alone, descended into the desert that summer’s day.

Things have changed. Here we were two individuals who hadn’t taken a long drive clothed in years, who now understood how uncomfortable clothing is to be confined in for long hours of travel. The tone was practical and a more enjoyable experience. The drive is nearly all a two lane roadway. Passing is not frequent. The constant burden of truckers, and parallel travel on interstate highways is not an issue on this road. There is only a couple of quick congested areas, where there might be concern about others seeing into our vehicle and discovering flesh. Intently, I watched my speed, the many curves and looked out for animals on the roadway, like deer, instead. It is an official scenic route, of vistas, climate change and geology, which defines Arizona for many.

We were hungry. We stopped off at a small Mexican Food restaurant seeing little else as we cruised through the string of small towns that have become one, from Showlow to the Honda Casino on tribal lands. I pulled under a tree in the trailer court that the little business sat within. The kilt that I had used to cover with in route as needed, didn’t slide under my bottom as well as pants. It got bunched up. I managed to pull it around, but used it to slip short pants on under it in view of the highway in necessity. The truck cab was tight for a guy who was stiff from a demanding four hour drive.

A t-shirt and we were on our way through the door. Inside there were no menus, just a hand written sheet with a few prices hanging below the counter. The counter was in part an old salad or buffet bar. We stood looking at photos of tasty dishes, with no prices or markings. We attempted to match up with the other hand written menu below to no clear understanding. The owner back behind in the kitchen poked his head out asking what I wanted, giving prices off of his head which were not marked, then ran back to work his grill, disappearing from sight. This guy was no businessman, with rough English; I spoke to him partly in Spanish. There was no way for him to prosper unless this food was exceptional.

While waiting, an excessively long time, we were assured by a local that he had had a food truck before this and the food indeed is given high marks. My instinct was correct, fish tacos were impressive in a mismatched plastic and Styrofoam serving basket. We didn’t even ask for drinks, as none were listed and simply walked to the truck for water, while the proprietor fumbled with his kitchen.

The trip to the Forest Service was not very enlightening. I did get an updated regional map, but the region is dissected into several districts which only know about their particular area, and have maps only for these. To get a clear view and topography of the White Mountains we would have to go to four different offices in four different towns, not an option. We were courteously connected to another office by a speaker phone across the counter. The voice affirmed that the other maps that we required, were just a couple of hours drive from where we sat. We also discovered that the Bear Wallow area was where a huge destructive forest fire had started in 2011. Eight hundred and forty-one square miles of burn across the White Mountains. Our plans and topo maps had been burned up in that fire apparently. “Where are the non- burned trails,” we asked. One trail was recommended and we were assured that it would be relatively peaceful in the middle of the week. We would have to go to Alpine to get details of the second objective the hot springs on the Blue River. We told the Alpine office that we would be by in a couple of days. By fluke, a lady stopped in who was familiar with the area south of Greer, a place that I had wanted to tour for many years. She directed us to a place where she had heard wolves with prey near where she had camped the week before and recommended a good hike near. The Mexican Grey wolf has been reintroduced to this eastern part of Arizona over the objections of a few ranchers. They are surviving in packs of two to eight.

With a few hours daylight yet, we stopped for gas, extra batteries and some ibuprofen in a quaint pair of stores one in the crowded parking lot of the Honda casino. DF wasn’t feeling well. Perhaps, the winding road, the altitude, the rigorous work that she had participated in the previous three days, but something was affecting her. In the parking lot, there was a visitor’s car with two toy dogs nervously yapping at every passerby. I quipped,” Listen, I hear wolves.” We were then off, through the forest and meadows that make up these high altitude realms. Rain fell, the highway steamed, it cleared and then another small rain hit again. There were few places to pull off and get undressed, but after a short while, we found public restrooms and no rain at Crescent Lake. 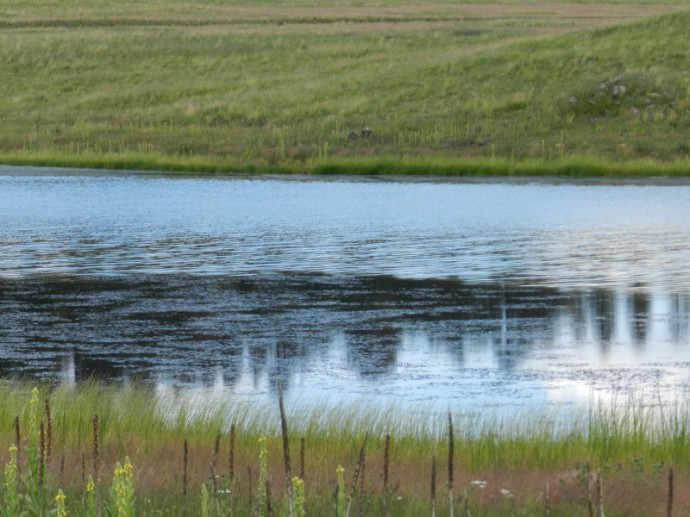 It was much cooler, even cold to two people coming up from 100F degree desert, when the wind blew across us like a frigid prairie. As I left the facility I stepped out naked, clothing in hand. I stretched, I breathed, the wind died, I felt alive in the exposed flowered grassland under the sun. 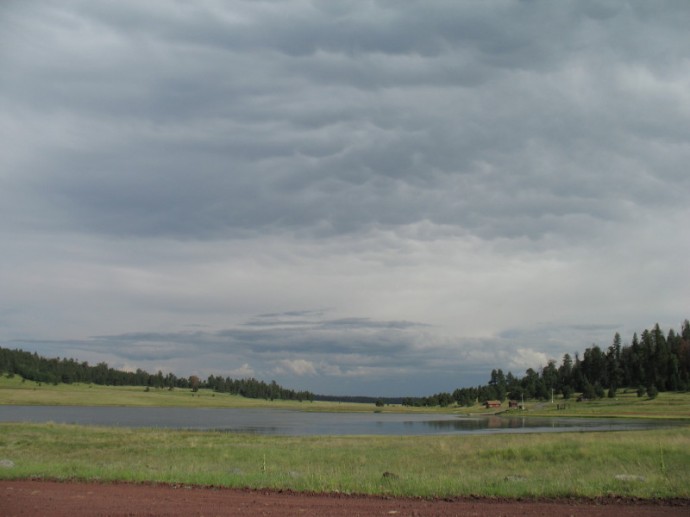 We followed the woman’s directions looking for a place with tree cover for privacy, etc., which were not in abundance around the Big Lake area, but there were still a few miles to go. This was new territory to us, only a spot on the map with a number on a line.

One thing was evident, this was remote and wildlife would find a certain safety to thrive. We naturists are kindred to these animals, thriving as we get more remote. The more remote we were, the more opportunity for free range naturism. We surmised that we were in the general direction of the recommendation, when we discovered an unmarked unmaintained road, probably a forest fire fighting barrier and access.

We drove into this forested area and a bit deeper came across a wonderful spot, complete with a log bench and fire pit from previous campers. Perfect.

We explored the immediate area, finding a wonderful glade, where the air was more calm, and a special vibe grasped us.

We made ready our camp, choosing the small dome tent, just because of the convenience to set it up after a long drive. The stakes sank well into the forest floor, unlike our desert experiences, and I blew up air mattresses and spread out a bed for comfort, while DF heated up a warm dinner. We had had it, DF still feeling sick and both of us tired, we sat watching sunset, eating, and delighting at a pair of squirrels chasing each other. 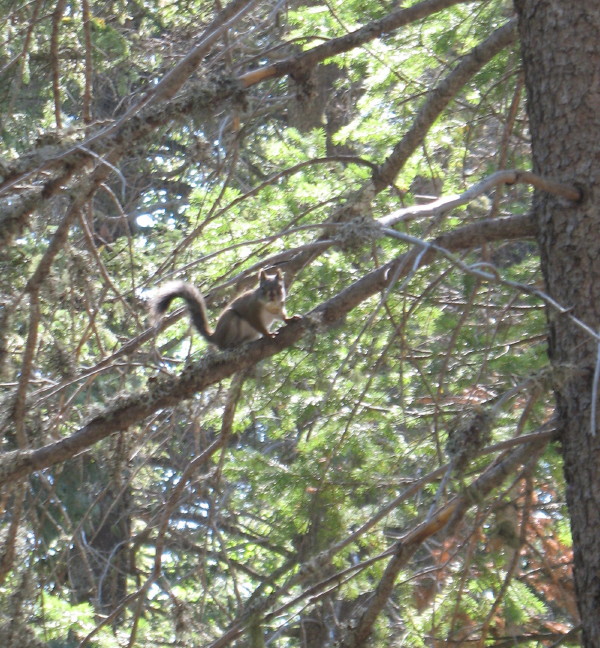 We had been listening to the waves of the winds high above through the trees. As the dark came the wind stopped. There was dead silence. There was peace as the masses of stars became evident through the tree tops. We crawled into the small dome’s soft bed under that amazing down camping quilt. In a light layer of thermal clothing we lovingly snuggled.

In the night, as I lay there resting, I heard the call of a lone wolf. Once, then twice. What a treat. They are being restored after decades, from near extinction. The whole of the trip could be worth it, just for those two moments. Something I’ll remember the rest of my life.