I recently got a copy of “The Naked Hermit.” This book comes from material gathered for a Ph.D. thesis, written by Nick Mayhew-Smith. He spent several years exploring numerous locations and milling through ancient manuscripts. He compiled a list of around fifty people, both men and women, who for Christian religious reasons had participated and lived as naked hermits.

This book focuses on a time in between in what are now the British Isles. A time when the mandate was to create a mass conversion of a Pagan population and Rome wasn’t in close control.

Many found themselves in bodies of water doing sacred rituals. Some, the originals, were desert dwellers. The author provides a plethora of those who could be described as monks.

The author spent various lengths of time doing his best to walk in these people’s shoes, that is lack of,  on location. He explains the profound insight that he discovered exploring the nudity and reclusive behavior. 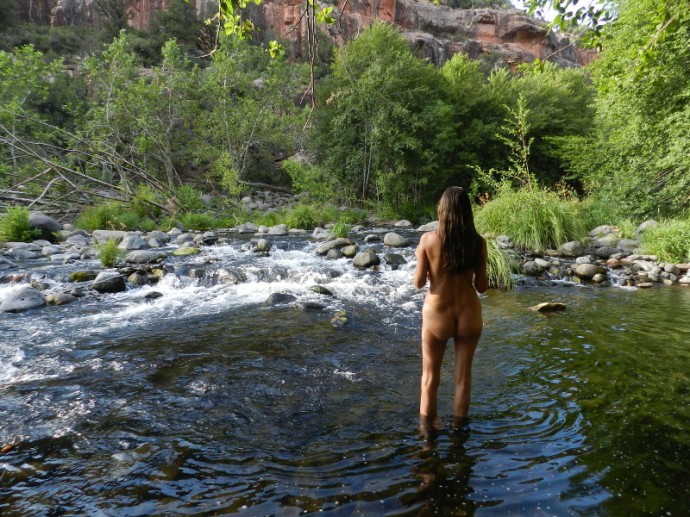 There is certainly a spiritual aspect of naturism. For more reasons than he presents, people throughout history have taped into this source of divine presence.  For example, nudity has been a tool seeking the moment and the sense of something which awakens there. It can also be a leap toward faith in a divine being, or order. It has been called a sacred state of “skyclad” by nature based religions. In India and the Mideast, renounciate peoples have tossed all possessions including clothing to learn of their Gods, or upon God’s orders. The Bible has profits wandering naked. These Christians whom the author has discovered and researched were following on a well-established footing with a considerable commitment.

For me, this was a validation. I believe that naturism is a tool of religious and spiritual practice. Free ranging naturism, used as a spiritual practice, deserves be protected in the United States under the First Amendment of the Bill of Rights. It is a path to access divine consciousness.

I am convinced that living nude and in nature with other practices, is a powerful means toward that which dwells within. By living more conscious in a body, one is in a moment. Through that, one can access a sense of loss of ego and acquire something that has been described as a state of being. Focusing on breathe and body has tradition in Yogic and other practices. It follows that for those of us that use our naturism for spiritual purposes, that the act of practicing naturism is a fundamental right.

Here is a significant excerpt from the book:

“It occurred to me under the stars that the condition of being naked is for everyone a “liminal” state. It is most closely associated with changing, going from dirty to clean in the shower, from home to the outside world, from cold to warm,  from day to night and sleep to awake, from sedentary to active in gymnasium and from dry to wet in the swimming pool. It is for most people a temporary state, an in-between condition that is necessarily brief. It is the embodiment of change itself, and as such it perfectly encapsulates a moment in transformation, a condition for rebirth that makes particularly good sense in the context of baptism, something that early church writers and liturgies freely and abundantly celebrated. Living naked as a hermit, therefore, is like hitting a pause button on life, freezing a moment between states, suspending animation and dwelling inside that gap. Perhaps inhibition to the unadorned human body has something to do with this condition of crossing boundaries, the supposed interim nature of it, like being interrupted in the most intrusive way possible. As a means of taking time out, as absenting yourself from routine human affairs, it does work well to push pause as a naked hermit and explore the depths, that are to be found in that in-beween state. It became to me a place where time seems to stop running normally, where a single moment collapses into the history of a place, where experience is unmediated, indeed where truth is naked, as the phrase has it.”

Next week, we begin October with a two part story into the Catalina Mountains near Tucson and a celebration with Hutch’s Pool.

2 thoughts on “The Naked Hermit”