Changes through Time: A Trip Report

It had been a very late evening into 2016. New Year’s Day was looking like a window of opportunity, like a calm before a storm. The temps in the 60F’s would most likely be with no wind and clear blue skies. Grabbing a smoothie and setting up dehydrated snacks for later, we decided on a jaunt up into the Tortolita Mountains where I live. I had just set up a report to publish about a downstream hike in 2011. We thought it might be fun to see how things have changed, or not. Lesson for New Year’s Day: Everything has change.

We needed exercise. It was part of the new resolutions. I was still recovering from being laid up for six weeks and the abuse that a body gets from Holiday Feasting and scheduling. A hike has become a tradition. I had a wind breaker jacket and pants folded up in my courier satchel with a sarong folded and cushioning the strap. DF had on multiple layers. Out of the north facing door it is cold in the shade, but around the house the sun graces a body nicely. We weren’t sure that we would have cold wind later or not. So, DF bundled, and me in shoes and hat, we drove through the neighborhood and up the hill until we parked at the evil developer’s gate.

I saw no reason for dress. There were no cars parked, I would see others at a good distance, and it felt right. I also had an urge to climb the long hill to the streambed with some degree of gusto. This was an exercise in recovery after all. I did. DF trailed behind, content in the calm and intense silence of the mountains.

We have had a long series of rains the last year. The vegetation has thrived. When I arrived at the wash to head downstream, I was greeted by many tall bushy heathy clumps of bufflegrass, an invasive problem here in Baja Arizona. Soon, we realized that another of the places that we have adventured through the years will be impassable in the warmer snake season. Maybe wearing gators, but risky. The last four or five years had made a change. 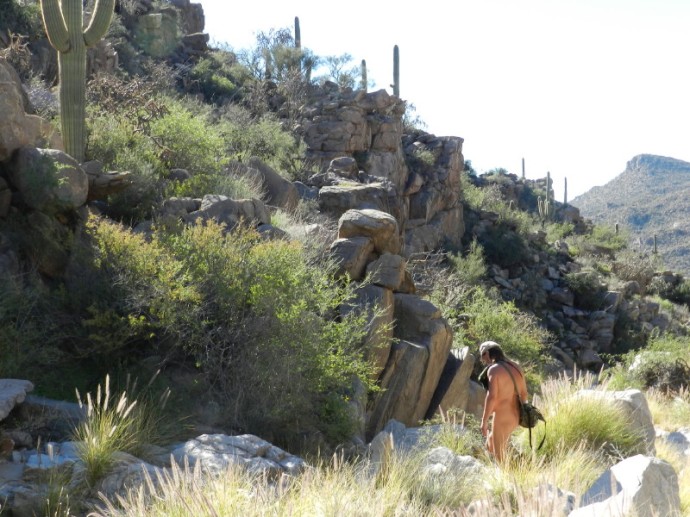 Nothing can be done now that the greedy developer has taken the public lands with lawyers and undue monetary influence to the government of the Town of Marana. The bufflegrass will take over while a subdivision claiming to be exceptionally sustainable and ecological lies to the public. Sadly, this wash will someday host multi-million dollar homes, driving us out of our playground mountain park. This did put some pale into my attitude, but that was soon overcome by the natural wonders of the moment.

We began our decent through the sandy, boulder strewn wash. We looked down a great deal. We watch for tracks in the sand. We like to know what wildlife might be in the neighborhood. We also like to know if anyone has been this way, so that we are not surprised by them. I found a couple unusual tracks that I couldn’t identify. I thought perhaps a raccoon, but it was way too large. There were no indications of any human activity.

As we continued we discovered several ponding waterholes from the rains the previous week. The ground was saturated. Everywhere they were accompanied by many tracks enjoying their blessing. 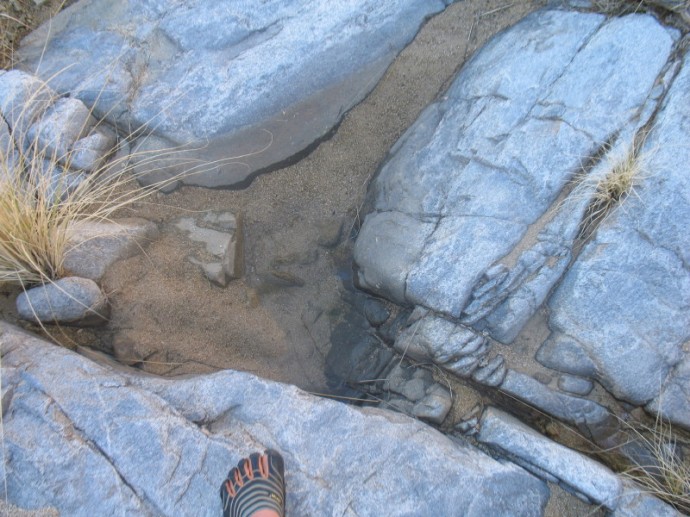 A Popular Watering hole in the Corridor

We hadn’t gone far when DF realized how overdressed she was. The hike up the hill had warmed our cores. The sun still touched us and the air was silent still. There was no evidence of humans, although this does empty out into another canyon where someone might, just might, come upstream from. I suggested that she leave some of her clothing, stashing rather than carry it, as I walked on. 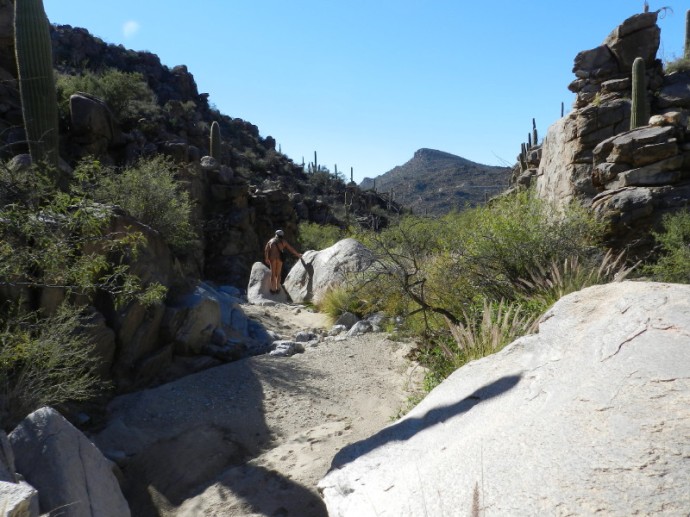 When I saw her again, no clothing was apparent. Instead of a large bundle, she had only her camera.

At one waterhole, DF became determined to capture the reflection of light on the nearby granite surface, which was exposed when one of us stood in as shade.

Also in the composition she wanted the shadows on the bottom of the pond from the leaves floating on top with the golden lining from the afternoon sun, the reflection in the water and how it glistened. It was neat to see, but difficult to capture with a camera still. 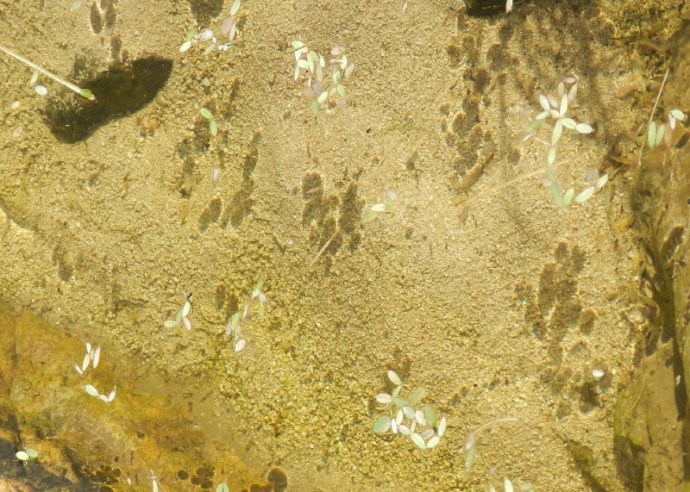 We soon realized that we had lost one tenacious friend. 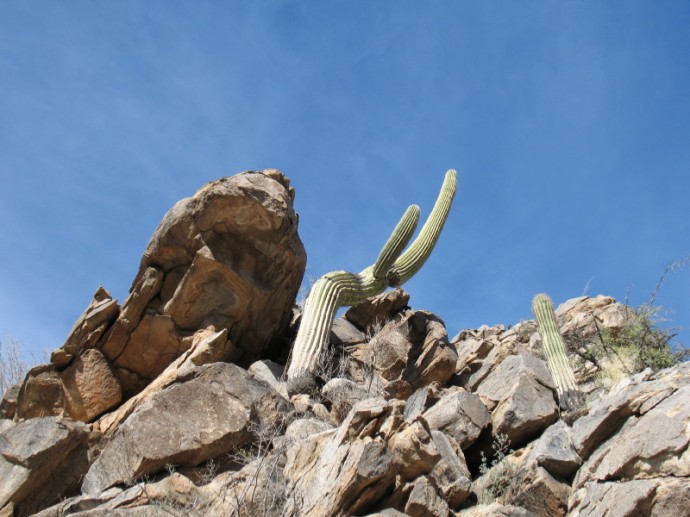 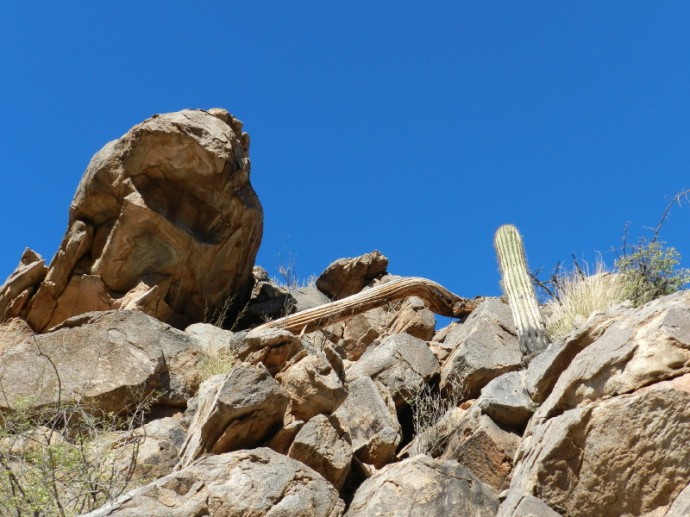 A saguaro can hold on for years, after water has ceased to climb up its structure and all else has dried to a skeleton. One arm may have just enough for one last bruha and a bouquet of flowers will appear. The remnants of buds remain on this one. 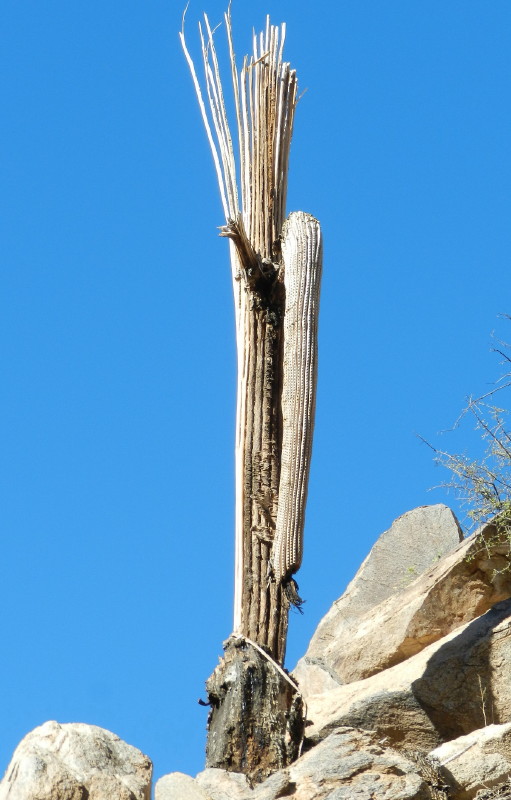 Here it is winter. The last several nights had seen record-breaking freezing temperatures, but flowers were about.

Several skeletal remains of saguaros were in the surrounding hills and cliffs. They had succumbed to the all-time record low freeze a couple of years before.

The crested and almost crested saguaros were still intact. Crested saguaros are a unique freak found in maybe one of ten thousand that develop a crest on the top. 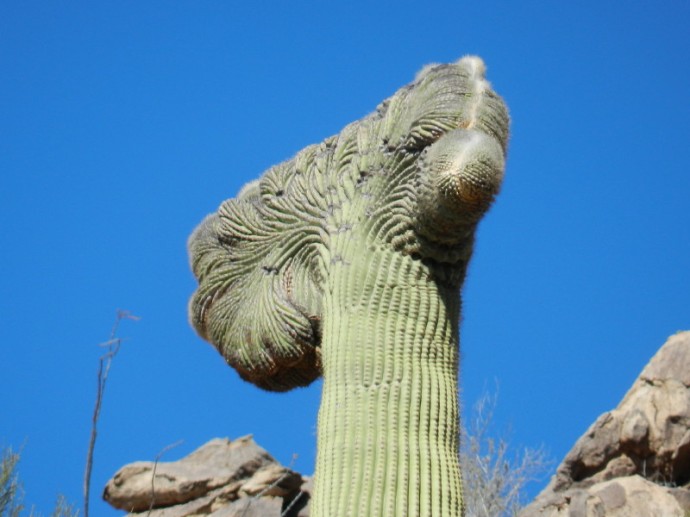 A dozen of the documented 42 that are up there were lost in the extremely unusual freeze just a few years ago.

We reached the bottom, where we were about to walk naked out into a neighborhood with houses. There was the familiar cove, but it was nearly completely changed. The rains and years have brought exceptional growth there. It had been challenging to navigate in the dense vegetation before, but now, it appeared impossible. There were thorns and cholla cactus seemingly everywhere. We were naked and had to be extremely cautious in every movement.

We found our way to the energy vortex at the foot of a twisted group of saguaros with droopy arms. 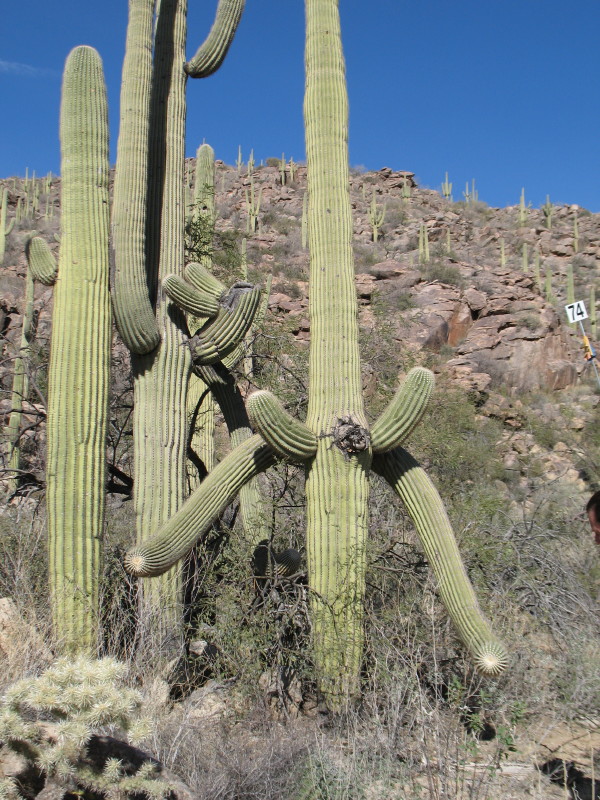 There had been a towering saguaro that we had had wonder as to how it stood up. Each arm can weigh tons. They have been known to fall and crush a car, even bending the frame.

We finally managed to find a way through. We climbed on piles of large rocks, while avoiding the needles at close distance, carefully and with contortions. 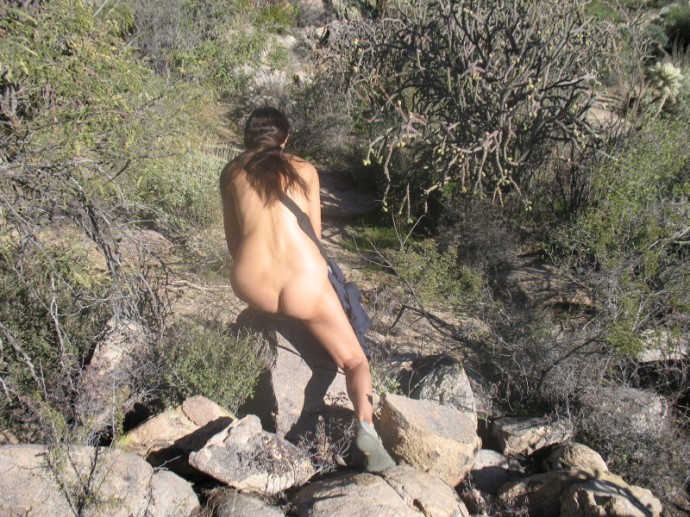 We climbed through a couple of places ducking with needles only inches away on each side, bundles of cholla needles underfoot.

I wanted to know how a tall saguaro ultimately falls. Would it fall like a tree, or have pieces comedown on each other, crushing. 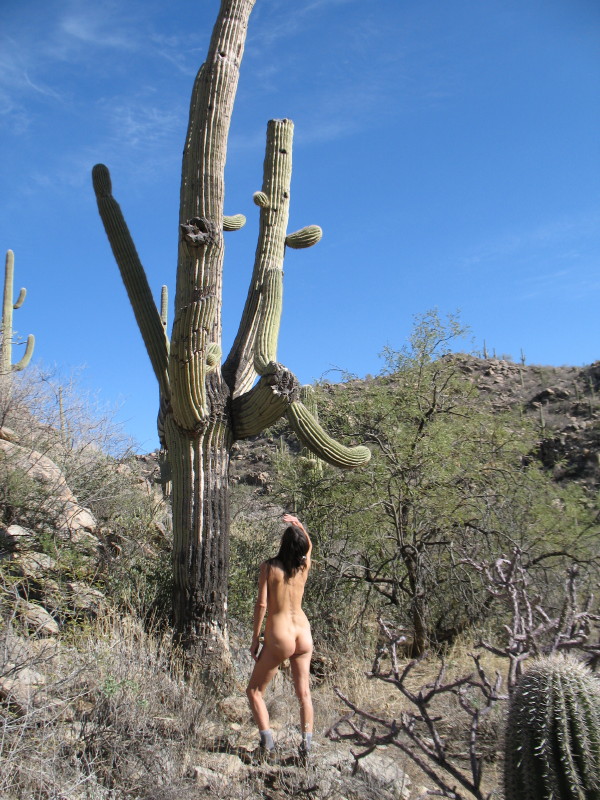 There wasn’t much left, when we finally found the old guy.

There were a few saguaro boots, which are the scar tissue result of woodpeckers making nests and gathering bugs.

Saguaros weren’t the only beings coming to their end in the Circle. 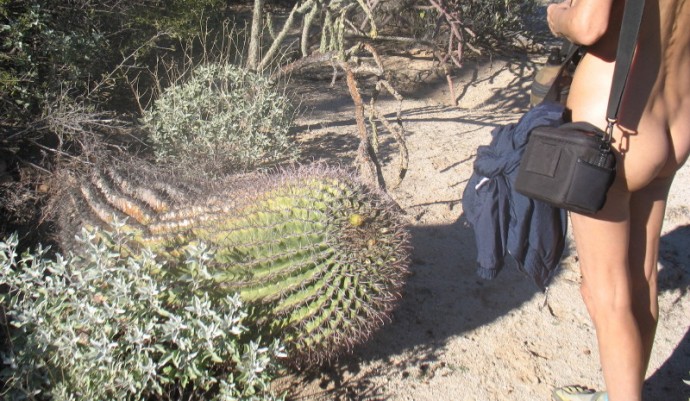 A Barrel Begins to Collapse

I found a flat rock in the tangle of sharp objects and decide to sit down for a rest and a snack. Well maybe not so flat. I soon took the sarong out as a cushion.

In the Thick of It

It is peaceful. The sound of chewing makes a loud racket in the absolute silence. We stop chewing just to listen. There is only the occasional call of a bird.

The meandering maze of opportunities to squeeze through prickers begins to challenge us once more. It isn’t easier on the way out. We have probably taken most of an hour crossing a few hundred feet.

Once in the wash, we move easier. We casually observe up into the canyon walls, the vista, and the immediate surroundings. There is only the sound of footsteps on sand.

The ancients used to harvest the flowing water when it rained in these dams. Crops were planted. Corn, bean stalks using the corn’s support, maybe some cotton or agave, purslane might cover the surface. There are many artifacts to be found up in these Tortolita Mountains. I think of naked Native Americans with an extensive civilization. Even further downstream, in the bajada, there was a ball court and evidence of the processing of 42,000 agave plant’s remains. Perhaps some were grown here. Pottery chards are abundant. There is an intimate knowledge of how lives, all lives, are spent in change. It is all very appropriate in the time of transition and new beginnings on a New Year’s Day. 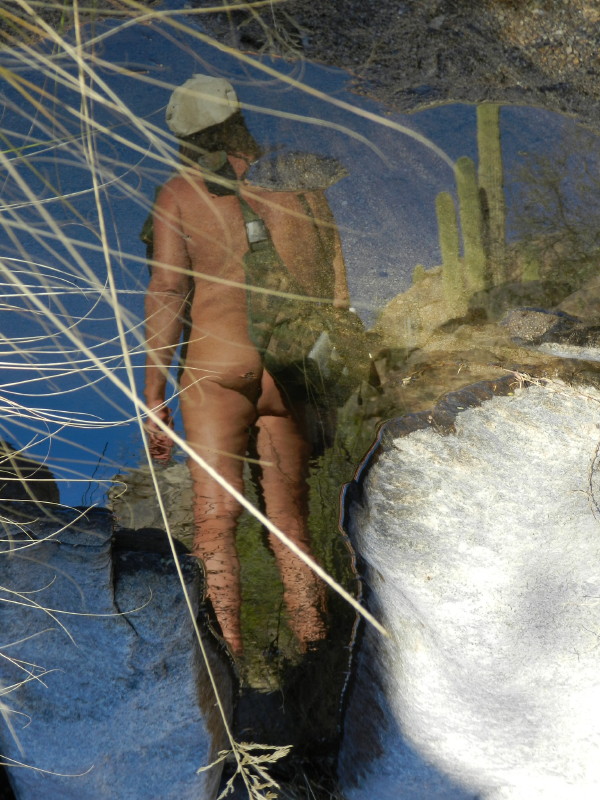 2 thoughts on “Changes through Time: A Trip Report”